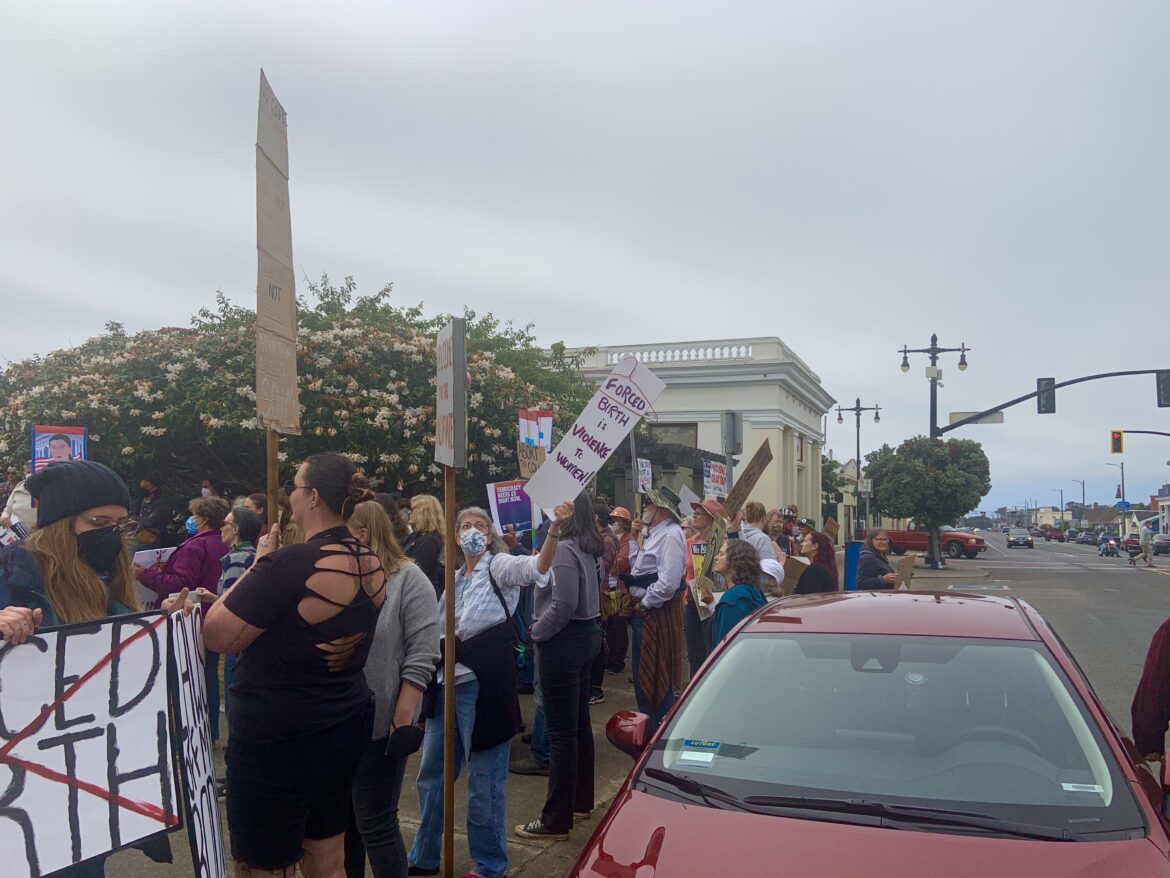 More than 100 people rallied at Fort Bragg's town hall on Friday, where they were addressed by Congressman Jared Huffman.

FORT BRAGG, CA, 7/5/22 – One week after the Supreme Court’s landmark decision effectively overturning Roe v. Wade, the number of protesters advocating for reproductive rights surged in Fort Bragg as more than 100 people gathered outside town hall on the Fourth of July weekend. Congressman Jared Huffman, who represents a swath of Northern California in Washington, D.C., was among their ranks.

“Make no mistake,” Huffman said, addressing the crowd Friday evening. “We are part of a huge, powerful movement all over this country. We are the overwhelming majority of Americans.”

His speech was met with cheers from those gathered – and boos for the Supreme Court on its decisions over the past week, including the ruling in West Virginia v. Environmental Protection Agency that constrains the federal government’s regulation of greenhouse gas emissions.

Huffman encouraged people to direct their energies toward supporting the reproductive rights groups and abortion funds “on the front lines” of this effort – and also promised that abortion access in California would remain robust.

“Here in California, we have wonderful protections and we’re going to strengthen those,” he said. “We’re going to actually lock it into the state constitution, and that’s happening in many other states around the country.”

He was referencing a proposed amendment to the California constitution that would ban the state from denying or interfering with abortions or contraceptives, which the state legislature hopes will be voted on as early as November’s ballot.

Several young people followed Huffman’s speech after the encouragement of field organizer Jez Anderson, sharing their feelings and experiences when they learned of the Supreme Court’s decision.

“We have constant school shootings, and we’re not going to last very much longer on this earth if we don’t start taking dramatic action now,” one of the high school students said. “So it’s pretty unbelievable that the people who have the most power in our country are choosing to govern people’s bodily autonomy over that.”

One young man, Angelino Anderson, started an echoing chant of “Abort the court.”

Some members of the crowd could remember a time before Roe v. Wade, including 79-year-old Lee Finney, who said she got an abortion in her early twenties – before the court ruling would have protected her.

“I was lucky that I was able to get the money together to pay for it and I had the connections even though I was a student, and could find my way to the doctor who did abortions,” she said.

She fears that the increased capacity for tracking and surveillance on the part of state and local governments will make the coming years even more dangerous for those seeking abortions in states where it’s now illegal.

Huffman wasn’t the only politician to voice his support in Friday’s rally. Although she could not attend in person, Fort Bragg Vice Mayor Jessica Morsell-Haye shared a message with protesters via organizer Mary Rose Kaczorowski.

“I’d really hoped to attend and passionately believe that reproductive rights are the most fundamental rights,” she wrote. She added, “I also vow to protect access in any way I can.”

For his part, Huffman encouraged people to bring their energy to the polls and vote for legislators who will protect the right to choose. One protester led the crowd in a group roar, seeking to “empower your rage.” Another attendee handed out fliers for Women’s Reproductive Rights Assistance Project, a nonprofit abortion fund that offers financial assistance to those seeking abortion services or emergency contraception.

“I just want to tell you how proud I am to represent you,” Huffman said to the Fort Bragg crowd on Friday.

Many protesters also showed up to Mendocino’s 4th of July Parade on Monday, where their contingent,  “We Won’t Go Back,” claimed the prize of “Most Patriotic.”

One thought on “‘We are the overwhelming majority’: Huffman addresses dozens rallying in Fort Bragg for reproductive rights ”