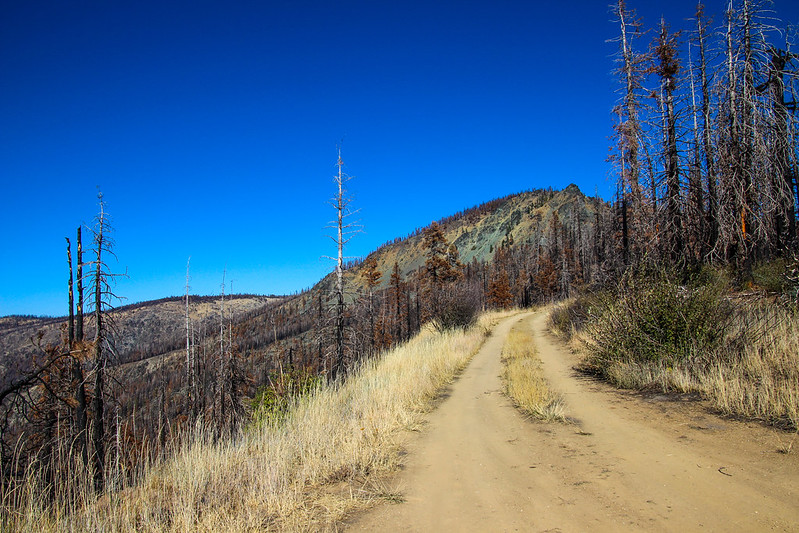 Fire damaged trees are visible across the landscape in this image of Black Butte Peak from October of 2021.

The Plaskett-Keller August Complex project will involve tree removal from roads and campgrounds on just over 1,500 acres on the Mendocino National Forest’s Covelo and Grindstone Ranger Districts. Crews plan to remove some trees from the area in and around the Plaskett Meadows Campground, which has not reopened since the blaze due to the safety hazards of dead and damaged trees. The campground will not be able to reopen until the hazards are addressed, according to materials from the Forest Service.

“This decision strikes a responsible balance between the need for post-fire management activities in the aftermath of the August Complex and the public’s concerns of adverse effects for wildlife habitat,” Sexton said in a news release. “Focusing on roadside and campground hazard trees addresses the highest priority actions and the critical need to mitigate risk to human health and safety.”

The August Complex fire burned for 1,032,648 acres by the time it was finally contained in November of 2020, making it the largest wildfire in California history. Contracts likely won’t be awarded for removal work until after October of this year, and removal of hazard trees should begin in summer of 2023, Public Affairs Specialist Laura Leidner told The Voice. She said the project will likely take a few years.

“There are several factors that influence project implementation timelines: the amount of work to be done, any limited operating periods to protect wildlife, short field seasons, and potential hazards like high fire danger,” she explained.

Crews plan to clear trees using rubber-tired skidders and tracked feller bunchers, “efficient” equipment that causes minimal impact to the ground. After trees are cut down and removed, a masticator – likely a tracked drum roller – will chew up, shred, and grind the remaining material left on the ground.

“Mastication doesn’t necessarily remove the fuels from the project area, but it rearranges the fuels so that they are easier to treat later,” Leidner explained.

As the Forest Service developed plans to clear trees after this fire, many members of the public expressed concern about disrupting habitats that rely on burned forests.

“The forest’s wildlife biologist continues to consult with Fish and Wildlife Service to mitigate disturbance to critical habitats,” Leidner said.

Northern Spotted Owl populations were of particular concern, as scientists have observed the birds in the project area in both 2021 and 2022. The Forest Service plans to address this by limiting operating periods when crews can work in certain areas with high owl activity, so as not to disturb breeding and nesting owls.

“Keeping the public informed is important to us not just during the planning process,” Leidner said. “We want to keep everyone engaged on our progress, and we will be sharing project updates on the forest’s website and social media throughout its implementation.”

The final decision letter and the environmental analysis are available online.