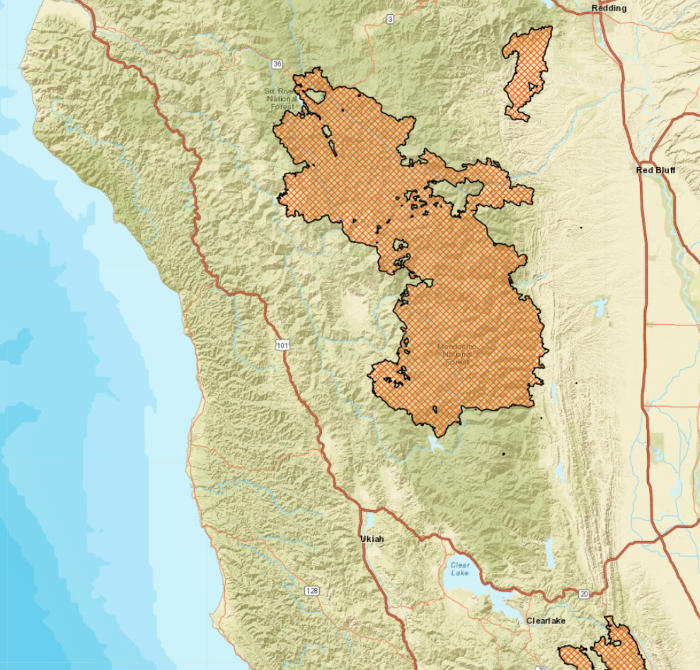 MENDOCINO Co., 10/16/2020 — The August Complex is officially 100% contained, thanks to substantial rain (around an inch in some places) that Mendocino County received this past weekend.

Usually, the dry season ends by October. But this year the county only just received significant rain. As you likely noticed, the first heavy rain fell on Friday. Starting early Friday morning, when it was still dark, the skies opened up and it poured for much of the day, bringing much needed precipitation to Mendocino County and Northern California.

The rain is welcome for many reasons, but one benefit is that it helped put out any last smouldering from the fires across the state, including the August Complex. Late this summer, on August 16 and 17, lightning struck hundreds of times in the Mendocino National Forest and ignited a slew of fires which eventually combined into the August Complex. Then, in early September, due to strong winds and low humidity, the fire grew and quickly became the largest in modern California history. Eventually, in early October, the fire surpassed one million acres. As of final containment the fire measures 1,032,648 acres, or about two and a half times larger than the previous “biggest fire,” the 2018 Ranch Fire.

Carol Underhill, public affairs officer for Shasta-Trinity National Forest, said in a phone message that today is the last day of fire suppression and that the National Forest Service will start working with nearby communities on restoration efforts soon.

Cal Fire and the National Forest had been slowly gaining on the fire since the wild September winds died down. But even all of their hard work and thousands of resources couldn’t quite finish their job. Luckily, the weekends drenching rains did the trick, putting California’s largest fire to rest.

Although the arrival of rain is no doubt a joyous occasion, it is important to note the precipitation did arrive concerningly late. Climate scientist Daniel Swain from the UCLA Institute of the Environment and Sustainability wrote in a tweet, “Just a reminder that it is *pretty wild that fire season-ending rains won’t have arrived until the *second half of November* in some parts of NorCal, but it’s consistent with research suggesting [a] trend towards drier autumns in a warming climate.”