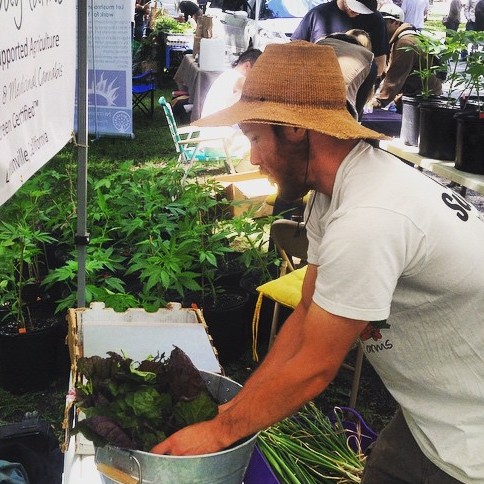 Casey O'Neill, the author, at his farm stand.

We approach the longest day of the year, which means that a lot can get done in a day!  Spring planting is edging towards completion, although I’m realizing that this year will be different with sustained crop rotations throughout the summer.  After trialing different methods to keep salad mix coming in through the hot months, I think this year may be the year that it works out.

My farming methods change over time, shifts in practice that happen because of new learning or equipment.  As the farm has grown over the years we’ve moved from low tunnels that cover single beds to the 14’x50’ Caterpillar tunnels that cover 4 beds each 30” in width.  The tunnels are curved in such a way that the two edge beds work for shorter summer crops, while the two center beds can be used for taller crops that require trellises.

This is the first year we’re growing beans in one of the hoophouse beds.  We built a trellis out of 3 hog panels and 6 fence posts.  Once the beans get above the hog panel there is baling wire strung back and forth between the fence posts for them to climb further.  It would have been even better with 3 more hog panels but alas, they were in short supply.

We grow a long, flat Romano bean called the Nor’easter, which is the only green bean I expect to ever grow.  Larger and easier to pick than the smaller varietals, we harvest into a Hoss harvesting bucket that sits at stomach level and is held up by two shoulder straps.  The bucket is curved to the belly and works well for beans, cukes, peppers, eggplant, okra, squash, and pretty much any durable produce that won’t squish easily.

The first row of cucumbers is beginning to climb onto the trellis, made of nylon netting suspended on a line of baling wire that is tied to each hoop of the hoophouse with baling twine.  The netting hangs down and we train the cucumbers to climb it, which requires regular attention but results in a nice, vertical wall of cucumber plants that don’t encroach on the narrow pathway.

We also have two rows of greenhouse tomatoes, which we trellis by training the vines around a vertical baling twine that dangles from ¾” EMT metal conduit that sits atop t-posts.  An inch and a half PVC T sits on each t-post for the conduit to run through, and each 10 foot length of conduit is connected with a metal coupler to form the 50 foot run, which is at about 7 feet tall atop the posts.  We dangle the string and tuck it underneath the tomato plant when we plant it so that it stays in place and is easy to train the vine to by wrapping it around the string every few days to control the new growth.

With beans and tomatoes right across from each other, it’s going to be a jungle that gets hard to manage in the height of summer.  The same is true for the two cucumber rows, although this year we’re staggering the plantings much more, with the first already climbing the trellis and the second not yet sown.  Last year they were on almost the same schedule and it was hard to make use of the hundreds of pounds of cukes that we harvested each week during peak season.

Last year we spent too much time staking peppers and eggplants with individual bamboo tied to each plant with twine.  This year we’re going to use the Florida Weave, putting in alternating t-posts and wooden stakes down the center of each bed and then running twine back and forth lengthwise down the row, wrapping each post and alternating sides so that the outward pressure from the fruiting plants pushes against both sides but is contained by the twine.

As of yesterday all of the tomatoes are either caged or trellised, 75 in the hoophouse and 375 in beds outside.  We grow the Cour Di Bue heirloom Oxheart tomato in the hoophouses, which is a maximum producer that will be consistent through the whole season.  Outside we do a row of Ace red slicers and one of big Striped German heirlooms.  The rest are Heinz canning tomatoes that Pops turns into a wide variety of tomato products for home use and sale at the farmstand.

As we ramp up into peak season the farm is thriving through care and attention.  The weather has been so cool and moist that we haven’t yet turned the corner into the burgeoning growth of summer, but nothing is stressed for water and the abundant greenery makes my soul sing.  As always, much love and great success to you on your journey!