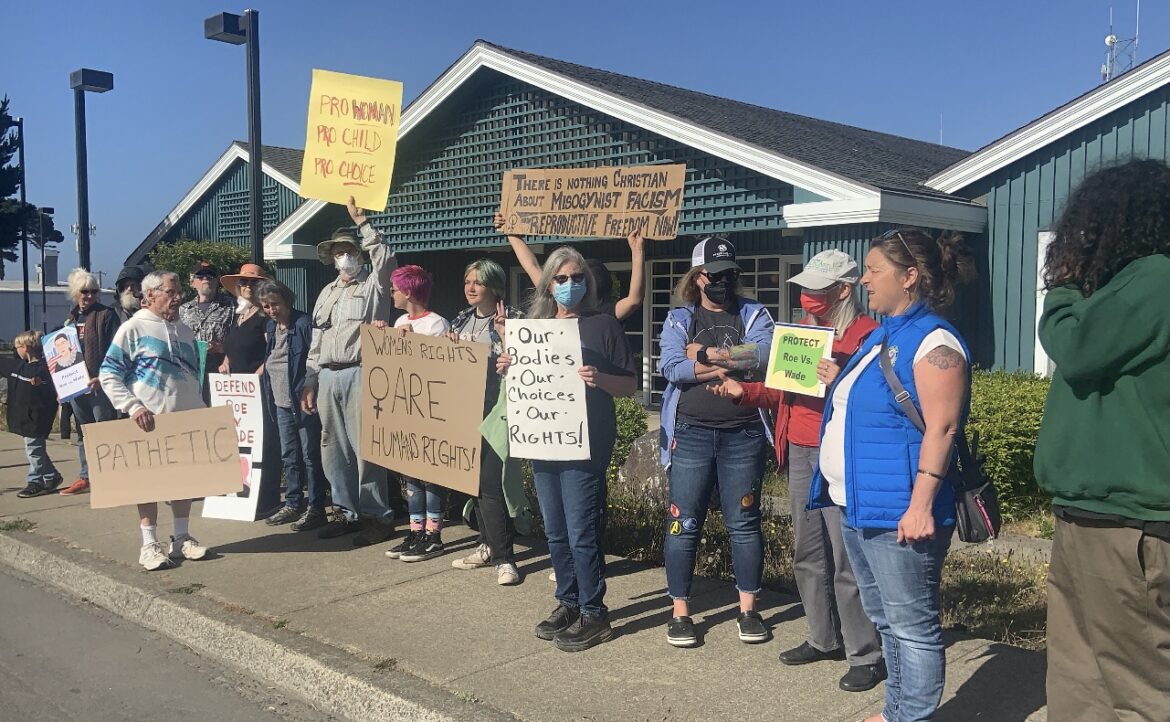 MENDOCINO Co 6/24/22 — People of all ages in Mendocino County protested the Supreme Court’s decision to overturn Roe v. Wade, the 50-year precedent that guaranteed constitutional rights to an abortion in the United States, which was announced this morning.

About 25 people showed up to the Ukiah courthouse to protest the court’s decision. Demonstrators held signs saying things like “My Body My Choice” and “Women’s Rights are Human’s Rights.” They displayed the signs along State Street as some cars passing by honked in support.

“I’m really pissed, really annoyed,” said Val Muchowski, an organizer of the event with the Mendocino Women Voters Coalition. “I spent the whole ’70s working for women’s reproductive rights and when we finally got it through the courts everybody was elated, everybody thought, ‘Wow, we got it,’ you know? And now we’re right back in that very same spot and it’s just incredible.”

Some in attendance in Ukiah were alive before Roe v. Wade was decided in 1973, and some were not yet old enough to vote. But demonstrators expressed frustration over the court’s ruling, and lauded the steps California lawmakers were taking to protect abortion access not only for residents, but also people from other states who may seek the procedure here.

“When I was 21, I had my first abortion. I took it for granted, even though it was fairly new then — I mean Roe vs. Wade had not happened long before that,” said Debra Moore, who attended the protest in Ukiah with her daughter and granddaughter. “But it never would have occurred to me, probably until like last year or a few years ago, that my daughter and my granddaughter would have less choice, fewer options and fewer rights than I had.”

Organizers of the protest in Ukiah are planning to demonstrate again in front of the court house at 10 a.m. Saturday.

About 15 people protested Friday’s Supreme Court decision outside Ten Mile Courthouse in Fort Bragg Friday evening. Many people driving along Franklin Street honked their support for protesters, who brandished signs which made their feelings clear: “Keep your religious beliefs out of our wombs,” “Defend Roe v. Wade,” and the all too familiar, “I can’t believe I am STILL protesting this! 50 years later!”

Organizer Mary Rose Kaczorowski has rallied over labor rights, forest issues, and more from New York City to the North Coast. Today is “another sad day in America,” she said.

“It’s been so frustrating to watch not only the Supreme Court, but also the Republican Congress bring us down this low,” Kaczorowski told The Voice. “It’s a disregard for human rights [and] it’s a disregard for the oath of office they take, to protect the constitution.”

Several high school students on their summer break had been holding signs outside town hall since 1:30 p.m. before coming to join this protest. For Reba Annlyn Landrum, demonstrating also meant recognizing the privilege that comes with the protections of progressive abortion laws in California. She moved here a year-and-a-half ago.

“The thought of this happening in Indiana is absolutely terrifying, and I am so worried and fearful for my friends that live there,” she told The Voice. But she’s also scared of what rulings could come next.

“I don’t know what else they’re going to take away from us,” she said.

Clay Carpenter, another Fort Bragg teenager, showed up to advocate for friends who have been sexually assaulted.

‘“[Abortion] helped save their lives, because they don’t want to be a young teen mom,” Carpenter said.

Jez Anderson, a field representative for Rep. Jared Huffman, read the congressman’s statement being shared at protests throughout northern California, including at the event in Ukiah. He affirmed that “abortions are health care,” regardless of any court ruling. Protesters hope he may join them next week, when their demonstration will coincide with his fourth of July weekend visit to the town.

For Kaczorowski, physically demonstrating in the community is crucial. “People have got to stand up – and not just on the Internet,” she said.

In that spirit, the group plans to reconvene at Fort Bragg Town Hall on North Main Street next Friday at 5 p.m.

Friday’s protest in Willits began with a small group gathered outside the Book Juggler on North Main Street, initially organized by the store’s co-owner and Willits City Councilmember Greta Kanne. The group grew over the course of an hour to around 50 people, and relocated to the stoplight at the intersection with Commercial Street, to better display signs to passing traffic.

The group included people of all ages, including several families with small children, and a variety of colorful homemade signs, and numerous vehicles of all kinds honked in support to cheers from the crowd.