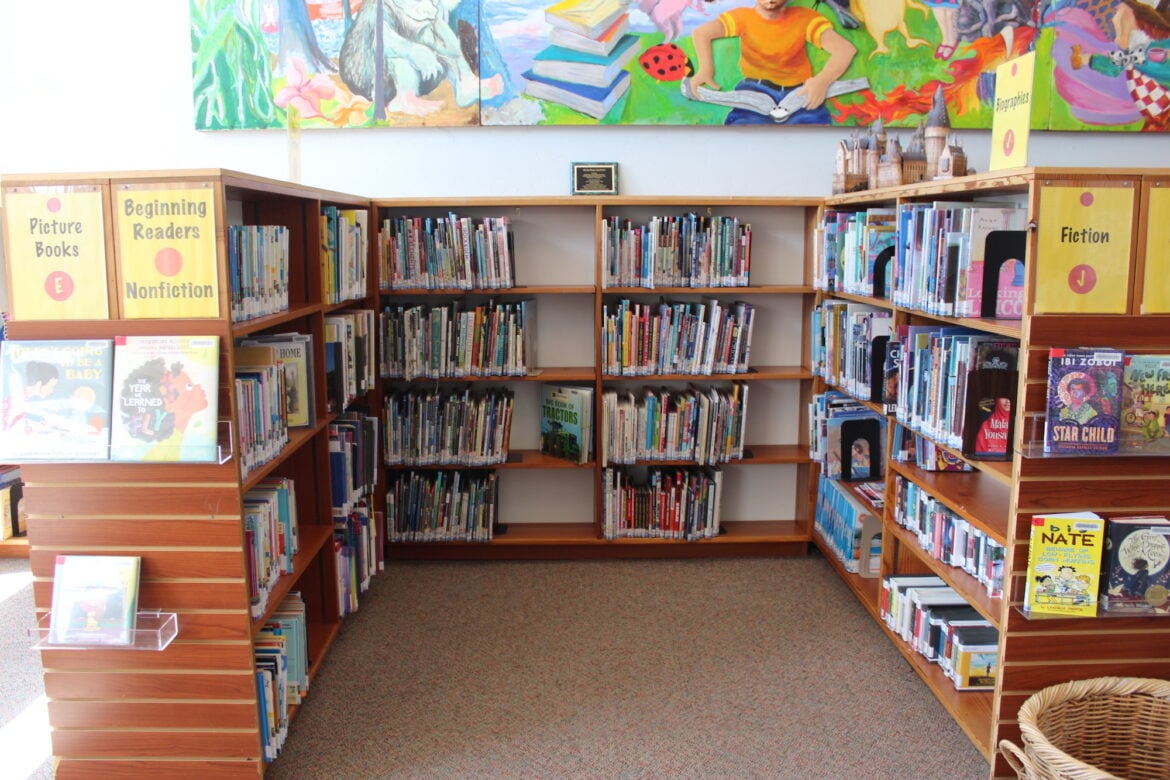 The Coast Community Library serves as a community center in Point Arena, a town of about 400. The library offers free wifi and computer access in addition to children, teen and adult books. (Lucy Peterson/The Mendocino Voice)

MENDOCINO Co 6/27/2022 — During the 2017 wildfires, Willits community members flocked to the public library to use its free wifi to contact friends and family.

In the early stages of the coronavirus pandemic, librarians at the Fort Bragg Public Library helped patrons find books to answer health questions.

And in the heart of downtown Point Arena, the public library serves as a community hub for the town’s 400 residents to enjoy free wifi access or say hello to the two full-time librarians.

Library supporters hope to continue those services to their communities by passing a countywide sales tax ballot measure to increase funding for county libraries. The Citizens’ Committee Initiative for the Library submitted petition signatures for a quarter-cent special sales tax to be placed on the November ballot.

“Back when we passed Measure A 11 years ago…the county libraries were on a death spiral,” said the committee’s Michael Schaeffer. “The initial library tax was called Measure A, we passed that with a 75% vote, and that gave us a one-eighth of a cent sales tax that has totally revived the library.”

The money gathered from Measure A covers about 70% of the libraries’ budgets, Schaeffer said.

About 40% of the revenue received from the library sales tax would go toward deferred maintenance at each library. To fix growing problems, the libraries have needed to dip into  funds for new books and staff salaries — a practice that has in some cases impeded upon the library’s primary functions.

“In the 11 years since Measure A passed, we’ve had to take out of operating expenses money for new roofs, new carpets, new furniture,” Schaeffer said. “And so we came back this time with a measure to increase a one-eighth-cent tax to a quarter-cent tax, and 40% of that total money will be reserved for capital expenses that will stop the drain on our operating expenses.”

Some building costs are covered by money that is raised by the various Friends of the Library nonprofit groups in the county. The Friends fundraise for the libraries to purchase new books and equipment and occasionally for building maintenance. The Friends of the Fort Bragg Library raised money for that  branch’s building expansion currently underway.

Having secure funding from the sales tax would accelerate projects and initiate others. The money can also be used to match grants and pay off loans taken out for building maintenance.

The Ukiah Library identified a need to expand its building after conducting a needs assessment, and the Willits Library needs a roof replacement, Schaeffer said. Some branches hope to move toward solar power, something the sales tax may cover in the future.

The bulk of the funding will go toward hiring and retaining librarians and buying updated books and materials. It will keep the libraries afloat and able to provide community programming and workshops, said Fort Bragg branch Librarian Dan Hess.

“The Friends groups provide most of the funding for the actual programs, so the funding that comes from the taxpayer is actually for keeping the core alive and relevant,” Hess said. “We’re always relevant to what the political situation is, the health [situation]…We had books about pandemics, historical responses to pandemics, the context for your life.”

“The library is that piece of the puzzle to help you see the bigger picture,” Hess continued.

Branch manager Delotch, who has worked at the Willits Library since 2019, saw support for the library increase especially after the coronavirus pandemic. People came to the library to find books and movies for entertainment while they were staying at home, to read the free newspapers provided by the library and to access the free wifi and public computers.

She’s also known the library and its amenities to be used by people who are homeless to charge their devices on the library’s charging stations or by people during natural disasters seeking shelter or information.

“It was the 2017 wildfires where this place was just filled with people to get information because this was the only place where they could,” Delotch said. “There’s bits of underestimation, I think, of the value of us as a community hub. We’re very much a community hub, libraries really aren’t silent dens anymore where everyone’s expected to just be absolutely hushed.”

The Citizens’ Committee for the Library Initiative spent the past several months gathering signatures across Mendocino County to get the sales tax measure on the November ballot. The measure will require only a simple majority of the votes to pass and the funds collected from the sales tax will go into a special fund reserved only for the libraries.

But nearly a month before the committee turned in its signatures, the Board of Supervisors began discussing adding another sales tax measure to the November ballot. At the board’s June 8 meeting, Supervisor Maureen Mulheren of the 2nd District proposed a general sales tax to fund fire prevention and water preservation.

After hearings at two separate meetings over the controversial sales tax, which was initially proposed as a three-eighths-of-a-cent tax, the BOS agreed to move forward with a quarter-cent sales tax reserved for just fire prevention.

Opponents argued that a second tax on the November ballot may result in the failure of both measures, and ultimately a loss of funding for the libraries.

“Consumers are experiencing the highest inflation they have seen in four decades, and their economic future is uncertain,” said 4th District Supervisor Dan Gjerde during the June 8 BOS meeting. “This is not the time to place multiple taxes on an election ballot.”

Hess, who has worked in libraries for 28 years and helped gather signatures for the library sales tax measure, is not worried about the measure passing in November. He’s seen the support the libraries received in the past and spoke with individuals who were willing to campaign for what he said is one of the only nonpartisan issues in the county.

The Citizens’ Committee supporting the library initiative is also confident in the county’s commitment to its libraries, but was caught off guard by the BOS proposition.

“I’m not anxious about our measure, but I think that the Board of Supervisors is rushing ahead too fast on this because I don’t think they’ve done their due diligence,” Schaeffer said. “And they’ve known since 2019 that we were going to be doing this at this time, and they’ve never said at any point, ‘You know, you should stop.’ So it’s perplexing to us as library supporters why they would put a competing measure on the ballot, but we’re fully prepared to deal with that eventually.”

The BOS will decide whether to put the fire sales tax on the ballot during its July 12 meeting. In the meantime, the libraries will continue to campaign for their sales tax measure.