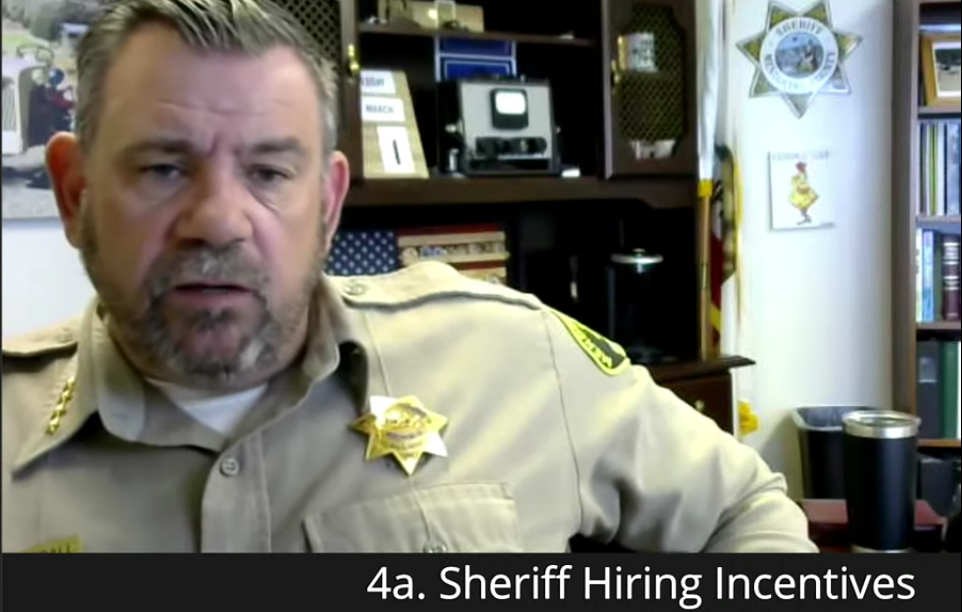 UKIAH, 4/6/22 — The Mendocino County Board of Supervisors unanimously approved a $20,000 hiring bonus for sheriff’s deputies recruited from outside agencies in their regularly scheduled meeting Tuesday morning. “Lateral transfers” (as cops like to call them) have a higher success rate than new recruits fresh out of the academy, according to Sheriff Matt Kendall, and even with the new bonus they still cost less to hire than putting someone through the academy — which he estimates at nearly $40,000. Plus, there are other benefits.

By comparison, going to the academy takes roughly six months. And even if new hires are sent to the academy at county expense (which is the traditional career path) they frequently “lateral out” to a competing agency in the first few years of their law enforcement career.

District 1 Supervisor Glenn McGourty and District 4 Supervisor Dan Gjerde asked how MCSO plans to encourage new laterals to stick around after cashing in their $20,000 bonus rather than transferring to other agencies like the ones listed above. Kendall responded that perhaps the payments could be structured over one to four years instead of an up-front lump sum, but was not asked to commit to such a requirement.

“I believe getting people to stay will continually be on us,” Kendall said. “If we don’t provide that good working environment where they can get their days off, and they get their time with their families, they could look elsewhere.”

Granting time-off requests is a lot easier when fully staffed, however. It’s not yet clear when the new hiring incentives will go into effect, but county staff were directed to move forward with implementation and come back to the board with a progress update in six to 12 months. As things currently stand MCSO is going into fire season with a 15% vacancy in their patrol division and 24% at the jail. Kendall has concerns about that, given law enforcement’s key roles in major disasters.

“The demands on public safety have grown in a fashion that we are no longer just investigating crimes. We’re also out doing alert and warning and going door to door,” Kendall said. “I think these one-time hiring incentives will be the way to go to help us stay competitive.”