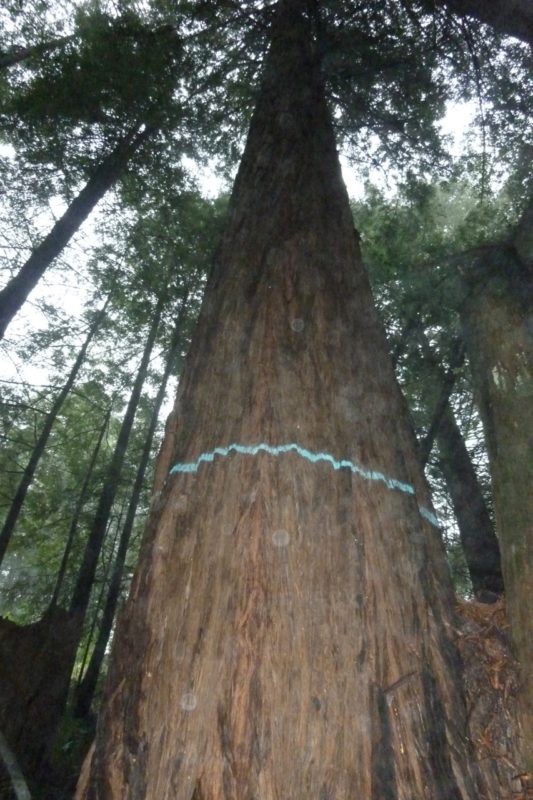 Tree marked for logging, attributable to Friends of Gualala River and Chris Poehlmann.

MENDOCINO Co., 4/15/22 — The Center for Biological Diversity (CBD) and the Environmental Protection Information Center (EPIC) jointly filed a lawsuit April 1 challenging a 993-acre timber harvest plan (THP) that would permit the Mendocino Redwood Company (MRC) to conduct logging and “hack and squirt” operations in an area of the Big River watershed containing thousands of old-growth redwood and fir. According to the lawsuit, the THP violates the Forestry Practice Act as well as the California Environmental Quality Act (CEQA), and its approval by Cal Fire was an abuse of the agency’s discretion.

“In 2016, citizens of the County of Mendocino enacted Measure V, which seeks to protect the County from logging practice known as ‘hack and squirt’ wherein logging companies cut open trees and then poison them with herbicide. The dead trees are then left standing in the forest thereby creating fire hazard. The Russell Brook THP authorizes this practice with respect to the tanoaks within the plan area even though Cal Fire acknowledges that it will create fire hazard,” the lawsuit states.

Plaintiffs argue the Big River watershed has already been “decimated” by logging, and this timber harvest will contribute to its further decline. Sediment from logging operations would adversely affect water quality, salmonid fisheries and wildlife habitat — including habitat for protected species like the Northern Spotted Owl.

A spokesman for MRC declined to comment on ongoing litigation, but on Thursday the logging corporation published a written response to CBD’s allegations stating that Measure V is superseded by state law and that no old growth trees within the Russell Brook THP will be harvested: “Since its inception in 1998, MRC has a policy of retaining all old growth trees on the property, both individually and in groups. MRC’s old growth policy can be viewed here: https://www.hrcllc.com/oldgrowth.”

According to the plaintiffs, however, the THP authorizes the harvest of some old-growth trees.

“There are caveats, so not every large old tree will necessarily be cut, but that is the one of the points of our lawsuit—that they haven’t disclosed which large old trees will or will not be cut,” attorney Justin Augustine wrote in an email this afternoon.

Wherever the truth of that matter lies, the THP does appear to authorize logging operations in the surrounding woods, and the lawsuit argues that the full extent of the logging’s impacts on trees have not been fully disclosed or addressed. CBD is asking the courts to void the Russell Brook THP and Cal Fire’s approval of the project. The case was filed roughly two weeks ago on Friday, April 1. Court records indicate that on April 7 Judge Jeanine Nadel held an “internal review” hearing, which typically excludes attorneys the attorneys arguing the case, but there are no other court dates currently scheduled.