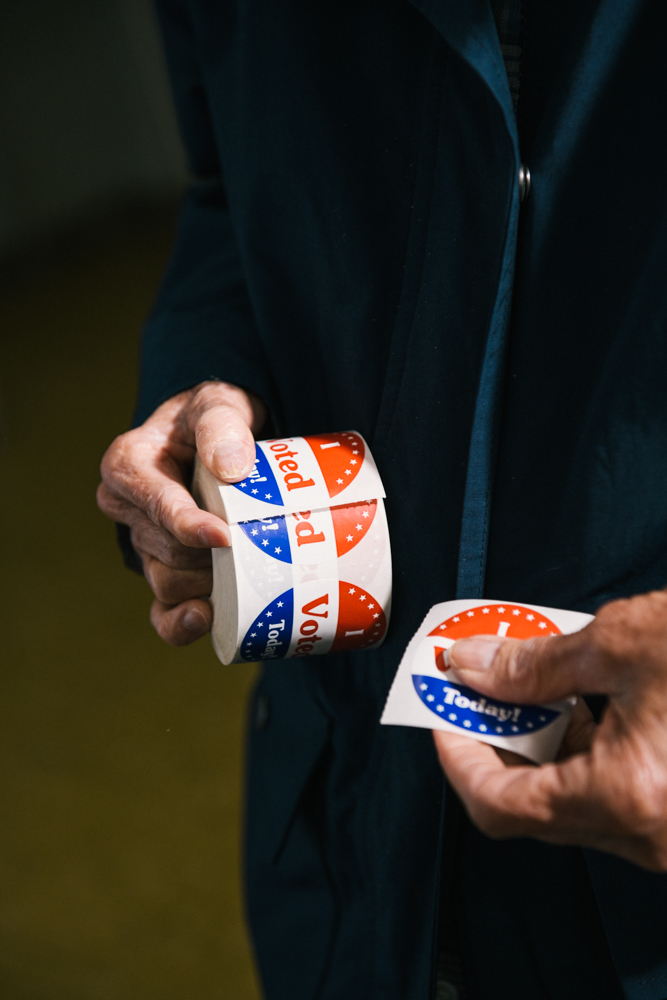 An election worker at the Willits Community Center prepares election stickers for voters on November 3, 2020. (Alexandra Hootnick for the Mendocino Voice)

MENDOCINO Co., 3/14/22 — Unelected Mendocino County Sheriff Matthew Kendall won his bid for re-election Friday when the filing deadline passed without a candidate emerging to challenge the incumbent, according to a draft candidate list on the county’s website. Kendall was appointed mid-term when former Sheriff Tom Allman retired in 2019 and never won an election. Mendocino County voters have not yet had an opportunity to weigh in on that appointment, and are unlikely to get such an opportunity until at least 2026.

District Attorney David Eyster, who was voted into office in 2010, is also running unopposed this year — just as he did in 2018 and 2014. This will be Eyster’s fourth term in office, although he’s only won one election. Katrina Bartolomie, who functions as Mendocino County’s clerk, assessor, recorder and elections administrator is also running unopposed. This will be her second term in office, after winning 67% of the vote in July, 2018.

Acting Auditor-Controller Chamise Cubbison is running unopposed for the newly created office of Auditor-Controller\Treasurer-Tax collector. Cubbison was recommended as a successor by outgoing Auditor-Controller Lloyd Weer in August when he retired mid-term. Eyster vehemently opposed Cubbison’s appointment, citing differences of opinion over expense reimbursement and urging the Mendocino County Board of Supervisors to find a “more high powered” individual for the office or dissolve it entirely.

Eyster got his way, in a sense, when the board voted to combine the offices of the auditor-controller and the treasurer-tax collector. Cubbison advocated against that move in an op-ed for the Anderson Valley Advertiser titled “The Misguided Financial Consolidation Proposal” but now that the job of Auditor-Controller\Treasurer-Tax Collector exists — she appears to be the only candidate interested in it. Either way, Cubbison will be overseeing expense reimbursement for the county (and the district attorney) for the foreseeable future.

Elsewhere downballot, the Anderson Valley Unified School District is asking voters to approve a $13 million school bond known as Measure M. That money would be used to renovate classrooms, build a multipurpose room for the elementary school and upgrade agricultural education facilities. Mountain lion attacks in the area, including one on campus that killed two goats and injured one more at the school’s Future Farmers of America (FFA) facility, have prompted concerns over school safety — and District Superintendent Louise Simson was advised by wildlife experts to construct a secure barn in which to house livestock in order to reduce the risk to students.

The voter registration deadline for the June 7 statewide primary election is May 23. Sample ballots go out April 28 and the first vote-by-mail ballots will be available May 9. Check back later for additional election reporting.

2/10/22 — Sheriff, DA, Superintendent of Schools and two Mendocino County supervisors up for re-election this year