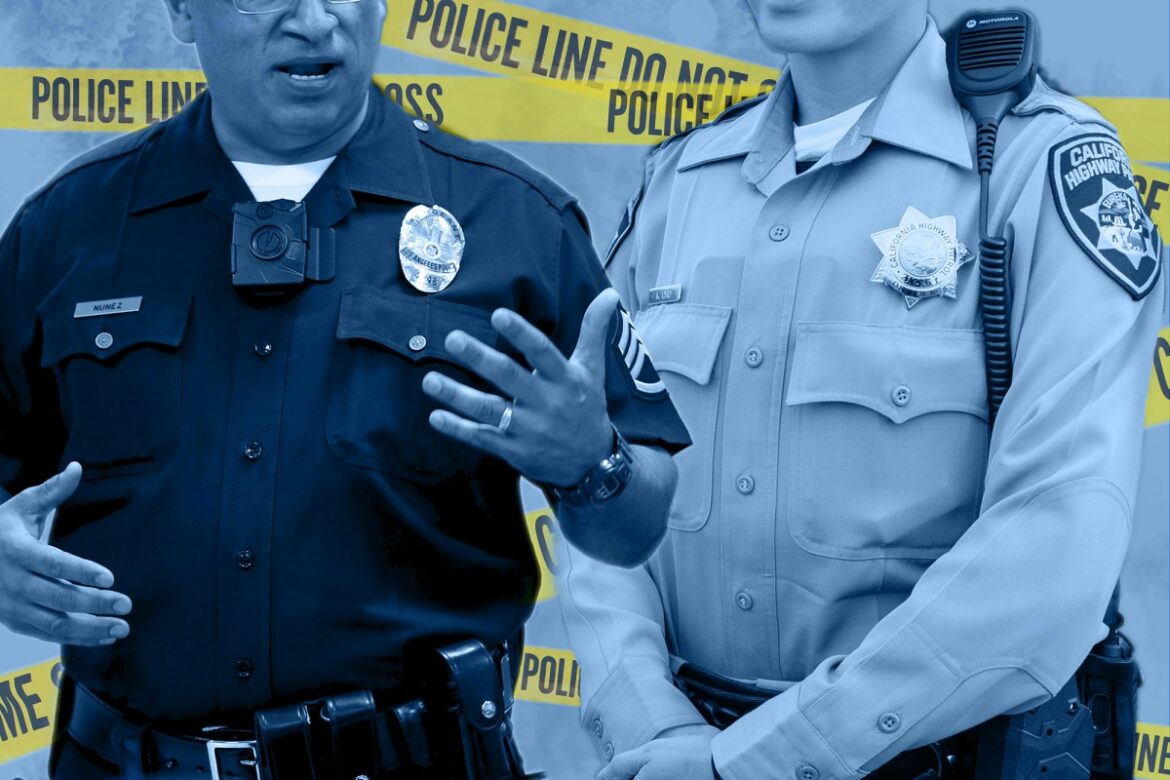 A California Highway Patrol officer drove slowly behind a man walking on the road. An Arcata Police officer rode in the passenger seat,  a second CHP officer sat in the back.

Charles Chivrell, 35, was disabled and had been diagnosed with schizophrenia, court documents show. And on this September 2021 morning, he was in distress, walking along the rural two-lane road in Humboldt County with a briefcase and a holstered gun — making both rational and incoherent statements as police trailed him.

The CHP officer behind the wheel had tried to convince him to drop his briefcase, to stop walking, to talk to him.

Chivrell, his back to the officers, continued on.

Then, without warning, the Arcata officer opened the CHP vehicle door and fired non-lethal pepper balls in Chivrell’s direction, while the CHP officer in the back seat got out and aimed his weapon.

Chivrell’s body jerked, turned around. He ran as the pepper balls struck him.

“He drew!” an officer yelled. A burst of fire from Chivrell’s direction. Next, a loud bang — a rifle.

Chivrell fell to the asphalt. His cause of death: a gunshot wound to the back of the head.

Nearly a month later, Arcata Police released edited footage from officers on the scene, showing multiple angles from dashboard and body cameras.  But the local department of 22 sworn officers couldn’t release what it didn’t have: body camera footage from the CHP officer whose shot killed Chivrell.

That officer is among thousands in the California Highway Patrol ranks who do not wear body cameras.

In California and across the nation, body-worn cameras have become a part of many officers’ standard uniforms. While body and dashboard cameras are not mandatory in the state, large and small agencies have begun seeing the cameras as tools of transparency — and a way to keep officers and the public safe.

The shooting in Humboldt County was recorded by at least three different Arcata cameras and one CHP dashboard camera, videos that recently were viewed by CalMatters.

The CHP, one of the state’s largest police forces with a $2.8 billion budget, only has body cameras for 3% of its budgeted 7,600 uniformed officers.

“At this point, body cameras are a no-brainer,” said Nicholas Camp, an assistant professor at the University of Michigan who uses body camera footage to study officers’ communication and their encounters. “It’s one of the few reforms that both the (American Civil Liberties Union) and police agencies have supported. So it is surprising that such a large agency hasn’t adopted them.”

California’s highway police make around two million stops a year, encounters that mostly happen within range of dashboard cameras.  But, the agency’s tentacles extend beyond the state’s crowded highways.

“Due to the nature of the CHP’s enforcement contacts, in-car cameras provide the most benefit…”

Gov. Gavin Newsom’s current budget proposal seeks to expand the CHP’s organized retail theft investigative unit, from $6 million in 2022-23 to $15 million by 2026. The unit targets the large smash-and-grab thefts, including a series that broke out in Northern and Southern California over the holidays.

CHP acknowledged it only has 237 body cameras agencywide, all in the Oakland and Stockton areas. A spokesperson said the department is focused on upgrading its dash cameras.

“Due to the nature of the CHP’s enforcement contacts, in-car cameras provide the most benefit…,” wrote spokesperson Fran Clader in an email to CalMatters.

She said the agency will continue evaluating whether to expand its body camera usage.

“We’re a small department, and for us to be able to help a statewide agency…we don’t do that very often,” Arcata police chief Brian Ahearn told CalMatters.

“(The local CHP office) could not have been more grateful for us to provide our video … to illustrate to the community the entirety of the event that led to the use of deadly force,” he said.

“In some ways, we dropped the ball. We’re not going to drop it anymore.”

Jones-Sawyer’s $10 million pitch to give all CHP officers body cameras eventually was whittled down to a $1 million pilot program in the agency’s Oakland and Stockton areas. A year into the pilot, officers recorded nearly 93,000 videos, but the program was never expanded.

“Let’s be clear, they never wanted to do any of it,” said Jones-Sawyer, a Democrat from Los Angeles. “If it wasn’t for me pushing for the pilot program, they never would have had the 200 (body cameras).

“In some ways, we dropped the ball,” he said. “We’re not going to drop it anymore.”

While CHP experimented with its limited pilot program, many local law enforcement agencies in California have gone all-in on body cameras.

Learn more about legislators mentioned in this story

State Assembly, District 59 (Los Angeles)Expand for more about this legislator

For example, the Los Angeles Police Department, which has a smaller budget, has given body cameras to more than 7,000 uniformed field officers, or about 73% of its force.

“They recognize body-worn cameras can be a benefit to the public by providing greater transparency that helps engender trust,” Lane said in an email response to CalMatters. “The challenge of body-worn cameras is, and always has been, cost.”

The same year former Gov. Jerry Brown signed off on the pilot program, South Carolina passed a law requiring fully funded police agencies to give their officers body cameras. Since then, Colorado, Connecticut, Illinois, Maryland, New Jersey, and New Mexico have all passed laws mandating body cameras for officers, according to the National Conference of State Legislatures. Last year, New York introduced body cameras for all of its state troopers.

In California, it’s a different story.

CalMatters queried more than a dozen of California’s largest police and sheriff’s departments and found that nearly all had at least some body cameras. Among the varying policies:

The San Bernardino County Sheriff’s Department was the only agency among those contacted that said it had no body or dashboard cameras. In contrast, the Sacramento Police Department provides both body and dashboard cameras for all of its officers and marked vehicles.

Dashboard cameras also have been shown to be crucial when evaluating police encounters. A recent study shows when people view dashcam footage, they are more likely to assign blame to officers than when they watch body camera footage of the same incident.

“In some ways, you get more visual information about what’s going on from the dash camera,” said assistant professor Camp. “One thing that body cameras get us, which I think is important, but overlooked, is the audio. You can’t get that from a camera that’s mounted on an officer’s car quite a distance away.”

As for the highway patrol, it’s betting on improved dashboard cameras.  The agency is nixing the grainy, DVD-based cameras it has used statewide since 2010.

The department’s new dashboard system will be wireless, capable of incorporating body cameras if the agency goes that route, and installed in every marked vehicle. The price tag: $52 million, which then-Gov. Jerry Brown approved in the state’s 2018 budget.

“Once that is completed, the new system will be capable of incorporating body-worn cameras in the future,” wrote Clader, the highway patrol spokesperson.

For now, families like Chivrell’s must rely on grainy CHP dash cam footage and body camera shots from other agencies when looking for answers.

In January, Charles Chivrell’s family filed a wrongful death lawsuit in the U.S. Northern District Court of California. The federal suit targets the City of Arcata, the Arcata Police Department and the California Highway Patrol, along with some named officers, for the shooting.

The lawsuit calls Chivrell “a mentally-ill man who was stalked by law enforcement officers…as he walked along public roadways.”

The complaint alleges that “(the officers) failed to utilize appropriate procedures for communicating and confronting persons suffering from mental illness, such as de-escalation techniques.”

Attorneys for the CHP and Arcata have filed motions to dismiss, which will be heard June 2.

“The more evidence you have that establishes what really happened, the better off everybody is.”

The family’s attorney, Mark Merin of Sacramento, told CalMatters that the shooting caused Chivrell’s family to move away from the area.

“It’s very disorienting for them, destructive,” he said. “It’s a very bad situation.”

Merin said he believes that all officers should wear body cameras, and turn them on when they interact with the public.

“The more evidence you have that establishes what really happened, the better off everybody is,” said Merin. “There’s no justification for not wearing a body camera.”