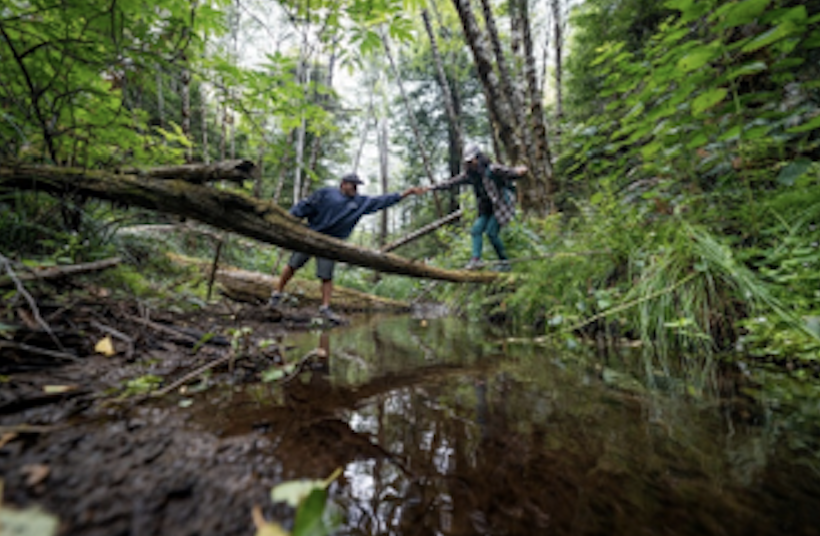 MENDOCINO Co., 1/27/22 — A 523-acre parcel of coastal conifer forest will now be permanently under the guardianship of the InterTribal Sinkyone Wilderness Council, which represents 10 different tribal governments, and the place will be renamed Tc’ih-Léh-Dûñ, which means “fish run place” in the Sinkyone language.

The parcel was first purchased by Save the Redwoods League in July 2020 with funding from a PG&E mitigation program, and is located east of the Sinkyone Wilderness State Park and north of the InterTribal Sinkyone Wilderness, which is also owned by the Sinkyone Council. The property includes over a mile of Anderson Creek, which is a tributary of the South Fork of the Eel River, and is home to a number of protected species.

The “partnership ensures lasting protection for Tc’ih-Léh-Dûñ, tribal stewardship of the forest, and the prevention of habitat loss, commercial timber operations, construction and development. The Council and League plan to apply a blend of Indigenous place-based land guardianship principles, conservation science, climate adaptation and fire resiliency concepts and approaches to help ensure lasting protection and long-term healing for Tc’ih-Léh-Dûñ and its diverse flora and fauna,” according to the announcement.

This transfer, which made national headlines this week, is one of an increasing number of parcels being transferred back to tribal ownership or management in Mendocino County and the North Coast, including a multi-tribal partnership for a parcel including an area known locally as “Blues Beach,” via legislation signed by California Gov. Gavin Newsom in September, 2021.

Here’s the announcement from Save the Redwoods League, and a video released by the organization about the transfer below:

San Francisco, Calif. (January 25, 2022) — For a second time, Save the Redwoods League and the InterTribal Sinkyone Wilderness Council have partnered to permanently protect coast redwood forestland within Sinkyone Tribal territory on the Lost Coast in Mendocino County, California. The League purchased the 523-acre property, formerly known as Andersonia West, in July 2020. To ensure lasting protection and ongoing stewardship, the League has donated and transferred ownership of the forest to the Sinkyone Council, and the Council has granted the League a conservation easement.

Through this partnership, the Sinkyone Council resumes guardianship of land from which Sinkyone people were forcibly removed by European American settlers generations ago. As an act of cultural empowerment and a celebration of Indigenous resilience, this forest will again be known as Tc’ih-Léh-Dûñ, pronounced tsih-ih-LEY-duhn and meaning “Fish Run Place” in the Sinkyone language.

“Renaming the property Tc’ih-Léh-Dûñ lets people know that it’s a sacred place; it’s a place for our Native people,” said Crista Ray, who is of Eastern Pomo, Sinkyone, Cahto, Wailaki and other ancestries. Ray is a tribal citizen of the Scotts Valley Band of Pomo Indians and a board member of the Sinkyone Council. “It lets them know that there was a language and that there was a people who lived there long before now.”

“Today I stand on the shoulders of giants, my ancestors … to bring them honor, and to not let our old ways be forgotten, for our next generation, my children, my grandchildren and all the kids that I’ll never get to see,” said Buffie Schmidt, who is of Northern Pomo and other ancestries. Schmidt is a tribal citizen and vice chairperson for the Sherwood Valley Rancheria of Pomo Indians and board treasurer of the Sinkyone Council. “Our ancestors are still here, they’re still around us. As I listen to the wind, I feel like my ancestors—who I’ve never even known in my lifetime—are here and happy that we call this place something that they’re familiar with: Tc’ih-Léh-Dûñ.”

“The Sinkyone Council today represents the Indigenous Peoples who are the original stewards of this land. Their connection to the redwood forest is longstanding, and it is deep,” said Sam Hodder, president and CEO of Save the Redwoods League. “The League is honored to support a return of Native people to this place and to partner with the Sinkyone Council in their management and stewardship of Tc’ih-Léh-Dûñ. We believe the best way to permanently protect and heal this land is through tribal stewardship. In this process, we have an opportunity to restore balance in the ecosystem and in the communities connected to it, while also accelerating the pace and scale of conserving California’s iconic redwood forests.”

Both organizations are committed to protecting redwood forests, their surrounding lands and the fish and wildlife that live there. Their partnership ensures lasting protection for Tc’ih-Léh-Dûñ, tribal stewardship of the forest, and the prevention of habitat loss, commercial timber operations, construction and development. The Council and League plan to apply a blend of Indigenous place-based land guardianship principles, conservation science, climate adaptation and fire resiliency concepts and approaches to help ensure lasting protection and long-term healing for Tc’ih-Léh-Dûñ and its diverse flora and fauna.

The Sinkyone Council’s goal for Tc’ih-Léh-Dûñ is to help expand the matrix of neighboring protected lands that are ecologically and culturally linked, “so that tribes can achieve larger landscape-level and regional-level protections informed by cultural values and understandings of these places,” said Hawk Rosales, an Indigenous land defender who is of Ndéh (Apache) ancestry and former executive director of the InterTribal Sinkyone Wilderness Council. “In this way, Indigenous Peoples will support and participate in the healing of these lands and their communities.”

According to an April 2021 United Nations policy brief, while Indigenous Peoples represent just 5% of the world’s population, they effectively manage approximately 20-25% of Earth’s land surface in areas that hold 80% of the planet’s biodiversity and about 40% of protected lands and ecologically intact landscapes. Indigenous cultural lifeways and traditional knowledge systems represent unique ways of relating to ecosystems, based upon Indigenous law and the law of nature—which, when carried out, help ensure biological diversity and abundance.

Tribal nations are at the forefront of addressing climate, conservation and wildlife crises through their engagement with efforts such as the 30×30 Initiative to Protect Nature, a 10-year commitment by various tribal nations, state and federal governments, conservation organizations and others to protect and conserve at least 30% of U.S. lands and oceans by 2030 through locally led partnerships. As prominent leaders in land and water protection, the League and the Sinkyone Council are helping to advance the emerging 30×30 effort in California.

“The Sinkyone Council has designated Tc’ih-Léh-Dûñ as a Tribal Protected Area. This designation recognizes that this place is within the Sinkyone traditional territory, that for thousands of years it has been and still remains an area of importance for the Sinkyone people, and that it holds great cultural significance for the Sinkyone Council and its member tribes,” stated Priscilla Hunter, who is of Northern Pomo and Coast Yuki ancestries. Hunter is a tribal citizen of the Coyote Valley Band of Pomo Indians and chairwoman of the Sinkyone Council. “The Council and the League have a mutual commitment to respect, safeguard and tend Tc’ih-Léh-Dûñ in ways that ensure its long-term protection, care and healing. In holding and caring for this land, we are helping to lead effective ways of addressing the global climate crisis.”

The League’s initial purchase of this 523-acre forest for $3.55 million in 2020 was fully funded by Pacific Gas & Electric Company’s (PG&E) Compensatory Mitigation Program (program). The program seeks to develop projects related to conservation goals outlined in PG&E’s Multiple Region Operations and Maintenance Habitat Conservation Plan. Tc’ih-Léh-Dûñ supports meeting the company’s 30-year conservation goals, which were developed with the U.S. Fish and Wildlife Service (FWS). Tc’ih-Léh-Dûñ contains abundant high-quality habitat for the endangered northern spotted owl, marbled murrelet and yellow-legged frog. The long-term management and stewardship plan for the property was developed by PG&E, the League and the Sinkyone Council, and it was approved by the FWS prior to protection and donation of the land.

PG&E also reimbursed the League and Council for transactional costs and management plan preparation, in addition to a $1.13 million endowment to support ongoing stewardship of Tc’ih-Léh-Dûñ.