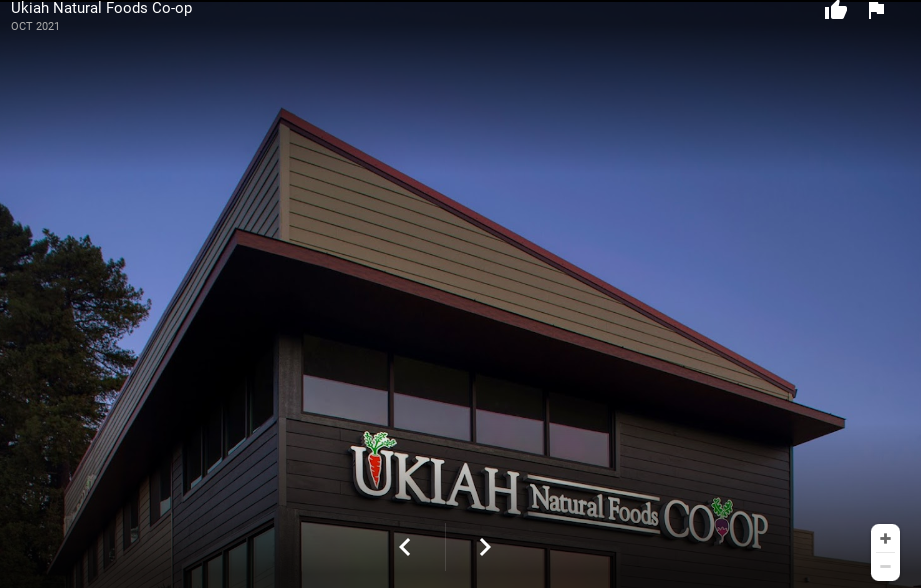 UKIAH 12/14/21 — A group calling themselves the Mendocino Patriots has organized an anti-mask flashmob at the Ukiah Natural Foods Co-op and several other businesses on two recent Saturdays, prompting at least five calls for service from the Ukiah Police Department (UPD) in two weeks. According to media logs published by the City of Ukiah, however, an officer responded to the latest incident and determined that no crime had been committed. Store management has been contacted for comment but so far declined to be interviewed. Meanwhile, the group is planning additional actions, including one at tonight’s meeting of the Ukiah Unified School District.

The UPD logs for Friday, Dec. 11 show a call for service regarding trespassers at 721 S. State St. around 2:50 p.m. Their description of the incident notes that several individuals were blocking aisles and refusing to wear masks. Officer Ron Donahue responded, and apparently counseled all parties involved, but the records say “neg crime” or negative crime — meaning that no evidence of a crime could be located. Ukiah Police Lt. Andrew Phillips told The Mendocino Voice that Donahue arrived at the co-op within 20 minutes, spoke with the demonstrators, and they left without incident.

“UPD wasn’t advised of any destruction of property and the issue was resolved prior to our departure,” Phillips said. “There have been many other descriptions of the incident in the past couple days. Some are accurate and some are not, at least when compared to the information and observations during the time the officer was on scene.”

The UPD’s statements in this case do not match up with other reports, however, or their own incident logs. In at least two calls for service on Nov. 27, UPD logs clearly state that the group in question refused to leave — which meets the criminal definition of trespassing, according to Police Chief Noble Waidelich.* In an email to The Mendocino Voice he disputed his own department’s characterization of those events:

“Penal code 602.1(a) which applies to intentionally interfering or obstructing business also contains an element that the person committing the offense also refuse to leave the business upon demand in addition to the disruption,” Waidelich wrote. “In this situation, the un-masked shoppers did leave when directed to do so by my staff.”

It appears as if Waidelich and his officers are exercising their considerable discretion in this matter, but the Anderson Valley Advertiser described this most recent incident at the co-op as “vandalism,” saying that participants caused minor damage to the store, opening packaged food items and eating them before offering to pay. Store policy requires customers to wear a mask, and the individuals in question appear to have been refused service, but by their own admission that did not stop them from opening and consuming merchandise on the premises prior to the arrival of police. The group posted videos depicting store staff refusing service to unmasked customers, some of whom accused them of discrimination and wearing a “stinky face diaper.”

Police logs indicate that officers were also called to Black Oak Coffee at 476 N. State St., around 4:05 p.m. on a report of “subjects blocking the register.” Officer Patrick Infante responded, and determined it to be a “civil matter.” In that case, the store was forced to close in the face of police inaction.

The Mendocino Patriots website takes credit for all of these incidents. On Dec. 11 and Nov. 27, participants were directed to meet at Hangar 39, a restaurant roughly one mile away from the co-op, at 2 p.m. “From there, we will receive direction on where we will be shopping,” the post states. “It is critical that our numbers are high for this event, so please bring as many friends as possible.”

On Nov. 27, Officer Saul Perez responded to a report of “20 subjects in (a) store refusing to wear masks or leave,” around 3 p.m. at 1215 Airport Park Boulevard. Then, around 3:45 p.m., Officer Ron Donahue responded to a call for service regarding “a large group of people refusing to wear masks or leave” the co-op. In each of these cases, officers permitted the trespassers to leave the scene without any additional investigation or enforcement — despite the crimes in question meeting Chief Waidlich’s definition of criminal trespassing.

Finally, dispatch logs show one final call for service at the co-op’s address around 9:30 a.m. Monday morning, Dec. 13. The caller requested assistance and follow up with the Dec. 11 incident. Logs indicate that officers did not respond — but Waidelich said he contacted the store manager directly to discuss “how we could handle future situations like this more efficiently.”

In early October reports of similar incidents surfaced in the Humboldt County community of McKinleyville, where sheriff’s deputies there reported they were too busy to respond to the incident due to a homicide investigation. Here in Mendocino, the same group is planning to stage another demonstration at tonight’s meeting of the Ukiah Unified School District’s Board of Trustees, which starts at 6:30 p.m. The Mendocino Voice has asked Ukiah Police Chief Noble Waidelich to explain his department’s plans for tonight’s meeting, but Waidlich did not answer those questions.

The school board is one of the only public meetings in Mendocino County currently open to the public, but those in attendance are required to wear masks, and if that does not happen the board will likely adjourn. The meeting will be streaming live on the district’s YouTube channel, and the agenda is available here. According to the group’s website, they’re also planning Friday rallies at Babcock Park in Willits and the Mendocino County Courthouse in Ukiah through the end of 2022.

*Editor’s note: this article has been updated to include the correct spelling of Chief Waidelich’s last name.