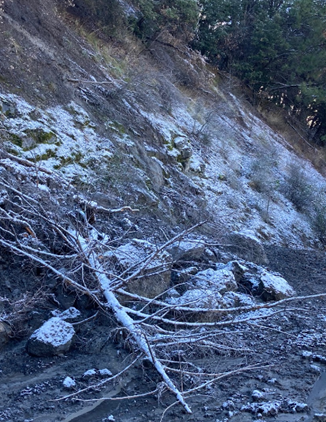 MENDOCINO Co., 12/15/21 — Another winter storm has swept across Northern California Wednesday, and earlier this morning the United States Forest Service announced that a landslide had closed Forest Road “M10”
a quarter mile west of Fout Springs. Because the ongoing precipitation, it will take several days of no rain in order for crews to begin clearing the roads, and people are asked to avoid the area if possible.

In other parts of Northern California, recent storms have led to significant flooding and slides in recent burn scars, which in the Mendocino National Forest including the August Complex and Ranch Fire burn scars.

Here’s the announcement from the USFS:

Officials ask visitors and residents to avoid traveling in the area until it can be cleared.

Officials also want to remind visitors that roads within the August Complex and Ranch Fire areas are subject to landslides, rockfall, erosion, debris flows and flooding. There are also likely multiple downed trees across roads and trails due to high winds.