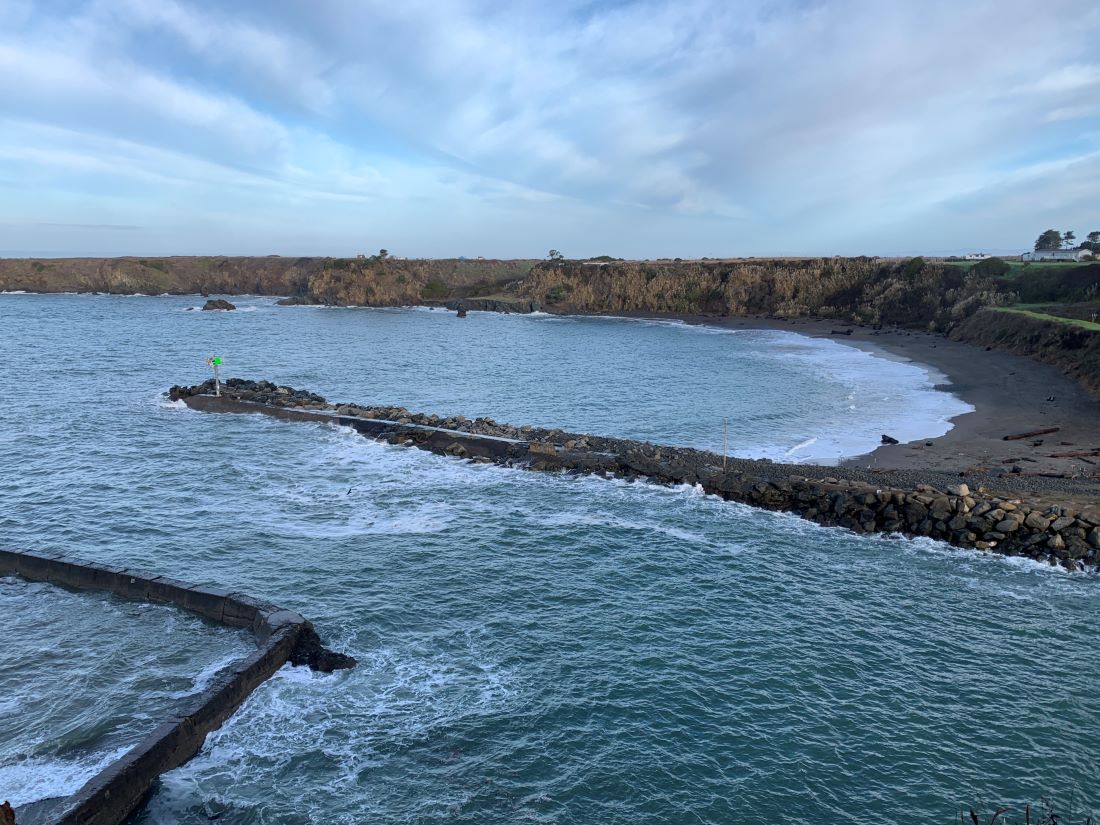 A recent king tide event at the entrance of the Noyo Harbor in Fort Bragg.

MENDOCINO Co., 12/2/21 — The highest tides of the year are happening this weekend, offering a glimpse into what coastlines will look like as the sea level rises. The State Coastal Commission is encouraging people across California to take photos of the shoreline during the king tides to help create a visual record of sea level rise over time. Those photos can also be used as data points that help climate scientists “ground truth” their models.

“It’s a very easy-entry community science project,” said Annie Frankel, who is with the California Coastal Commission’s public education program. “It doesn’t require any special knowledge, it just asks people to go out to the shoreline during a high tide on a king tide day, take a picture and upload it.”

Anyone can upload their photos to the California King Tides Project, which started about a decade ago as a collaboration between nonprofits and local, state and federal agencies to both help raise awareness about sea level rise and collect data for climate scientists. “In 2018, we did some enhancements so that when people upload the photo, we’re mapping it,” Frankel said. “So the location data has become a lot more important so we really do try to understand where a photo was taken so we can place it more accurately on a map and that makes it even more useful.” King tides are a foot or two higher than the average high tides during the year, so they present a good opportunity to document what the coastline is going to look like in the future, as well as what areas will be at risk of flooding, Frankel said.

This weekend, the National Oceanic and Atmospheric Administration (NOAA) is predicting high tides in the area will sit between 7 and 7.5 feet through the weekend and into Monday before dropping just below 7 feet by noon Tuesday. High tides in the area are usually between 5 and 6.5 feet, according to NOAA data. Corresponding low tides will be a foot or two below sea level.

The rising sea level poses a risk to low-lying coastal communities, particularly those that have facilities like power plants, sewage treatment facilities and cleanup sites that could pose a hazard if they were flooded. Researchers with the Toxic Tides Project put together a list of facilities that will be at risk for sea level rise in the state in the coming decades, including 135 facilities by 2050 and 440 by 2100. None of those are in Mendocino County.

“The real worry is if we get a storm surge during a king tide as we move forward with climate change,” said Sheila Siemens, executive director at the Noyo Center for Marine Science, “so we really want to document where we’re most vulnerable to those events.”

A storm surge refers to when a storm causes an abnormal rise in water levels above what’s already being caused by the astronomical tides. They’re also known as perigean spring tides because they happen when the moon is new or full and closest to the Earth.

For the past couple of years the Noyo Center has had a group of volunteers spread across the county document the areas most at risk for sea level rise, Siemens said. It’s too late for the general public to volunteer with that program, but they can still document and upload photos on their own. If you can’t participate this time around, there will be more opportunities in the future. The next predicted king tide event this winter is expected to be between Jan. 1 and Jan. 3.

To find out more about how to participate, visit California King Tides Project.