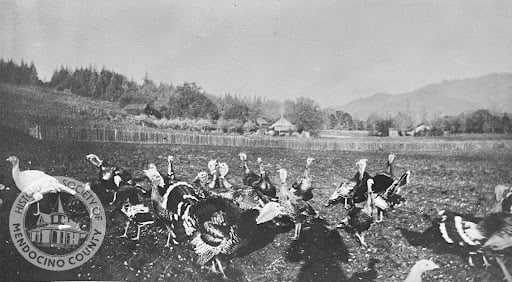 The Louis Finne Ranch at the center of the photograph with the Peter’s home to the right. You can see the old Finne winery on the hill to the left. It burned down in 1921. Finne first planted grapes in 1878. Historical Society of Mendocino County, Ukiah, Ca.

Since the local lumber company took to dry piling it’s logs there has been a little or no used for storage pond and this week the old damn across Pudding Creek was blasted to let the water out. While the company had its logging operations on the Noyo river this pond is used to store a portion of the surplus logs for the winter run.

Fort Bragg-Dr. McLean Campbell of this place, who is a member of the local board of health, inspected the milk being peddled throughout the town the first of the week and found most of it below the required standard. The test was made for cleanliness and for butter fat, the State law requiring that the milk be clean and contain a prescribed amount of butter fat before it can be delivered to customers. Although most of the vendors were peddling unclean milk, but few fell below the test for butter fat.

The Board of Supervisors met at 2 P. M. November 14 with all members present. The minutes of the last meeting were read and approved.

Hearst school district was ordered reinstated. The boundary line between Hearst and Little Lake school districts was changed according to the recommendations of the school superintendent.

A resolution was passed against the proposed stage line from San Francisco to Eureka and endorsing the service of F. M. Todd’s stage from Ukiah to Willits.

Change in boundaries between Redwood and Calpella voting precincts ordered made.

Three hundred dollars set aside to cooperate with Biological Survey to make demonstration in first district on destruction of coyotes.

Fort Bragg, the Pacific Telephone and Telegraph Company are making a number of improvements in Fort Bragg to take care of their growing business and give their patrons better service. An additional new cable, 1450 feet in length, is being extended out Laurel Street. It has accommodations for 100 more phones.

The people of Casper have responded in the usual open hearted way by donating liberally towards the Community Xmas Tree. $242 has been collected at this date and a few more to hear from. The sum exceeds last year‘s donation.

Todate we have had 6.49 inches of rain, as against 17.47 inches for the corresponding. Last year. In November last year we had 11.06 inches of rain. There’s November 4.49 inches were recorded by W. F. Fuller.

The diphtheria situation here took a turn for the worse this week, when seven new cases discovered at the orphanage among the three lower grades of children, which hitherto had been exempt. In the grammar school eight carriers were discovered in the overflow class at the little school and in addition three cases developed.

Ground was broken the first of the week on the new store building to be erected  by Frank Sandelin on the lot formally occupied by Miller’s Stable. Although the lot runs clear through to School Street, only the front 60 feet will be taken up by the new building. The structure will be one story but will be built with heavy foundation and walls to sustain two stories which may be added in the future as an annex to the palace hotel. The interior is to be divided into two stores.

Two teams from the Finnish colony are hauling some 30 loads of gravel per day onto the new school site. The new school building will consist of four classrooms and an assembly hall instead of three as we stated as last week. The extra classroom will not be finished inside at present but will be used as a playroom in bad weather.

A PROCLAMATION TO TELL THE PEOPLE OF UKIAH AND CONTIGUOUS TERRITORY – Dispatch Democrat. November 28, 1921

The Ukiah Chamber of Commerce is in process of re-organization, and expansion. The time has arrived when the citizens of this community should get together in a strong, efficiently managed movement to advance the civic, industrial, agricultural, commercial and economic welfare of Ukiah, and its contiguous territory. The future commercial and civic progress of this community is in a large measure staked on the successful outcome of this plan to give the community a civic-commercial organization, second to none in communities of this class. It is our belief that a modern, well supported civic-commercial organization, will furnish the organize means to advance the community’s best interest. It is proposed, therefore, that the Chamber of Commerce be re-organized, expended, and revitalized. This re-organization is to take place coincident with an intensive membership and service fund campaign during the week of November 28, 1921.

Following the example of Sacramento, Stockton, Fresno, Hollister, Vallejo, Santa Rosa, Sebastopol, Napa, Reedley, Bakersfield, San Jose, Santa Cruz, Eureka, Chico, Delano, Newman, Reno, Spokane, Butte, and approximately 400 other cities of the United States, ——several additional to those named above in our own California——we have engaged the American city Bureau of San Francisco, to direct our efforts in this campaign, and to effect the real organization along the broadest, most comprehensive lines, modern and scientific. In order that the newly enrolled membership may have the opportunity of expressing its wishes in the matter of selecting a Board of Directors and effectuating a complete we are organization, and election will be held immediately following the enrollment campaign. The term of office of the members of the old Board and the present officers, expires December 31, 1921. Every member will have an equal voice in nomination an election, both of which will be by secret mail ballot.

We feel that we are too few to undertake this program unassisted, and have therefore, I name several communities to whom authority is given to carry out this task. Thoughts of the campaign and earnest endeavor will be made to acquaint you more fully with the plans, but you were asked to look into the matter yourself and those assist in the work. If we are to have a modern civic commercial organization of working members, the time is to begin is NOW. This is a call to our citizenship for personal service. This is your home, as it is ours. Jointly we can make the Chamber of Commerce and incalculable power in the community’s upbuilding. We want you to join hands with us for a bigger, busier, and better community.

DON’T BE A SLACKER

John Riddle, architect and builder and his crew of twenty-one men are progressing rapidly with the work on the new bank building. The names of the builders and Cashier Jde Thomas and some pennies donated by some passers by for good luck were placed in a glass jar and embedded in the corner stone which was laid last Wednesday. The building is quite large, the dimensions being 45x56x27. Outside men on the job include John Riddle, Wm. Taylor, Geo. Caver of Healdsburg, E. Newian and Mr. Mussleman, San Francisco. These men need no recommendation, their work speaks for itself. The balance of the crew are local. A. Biggar, the contractor, is a hustler, and sure understands his business and concrete work.