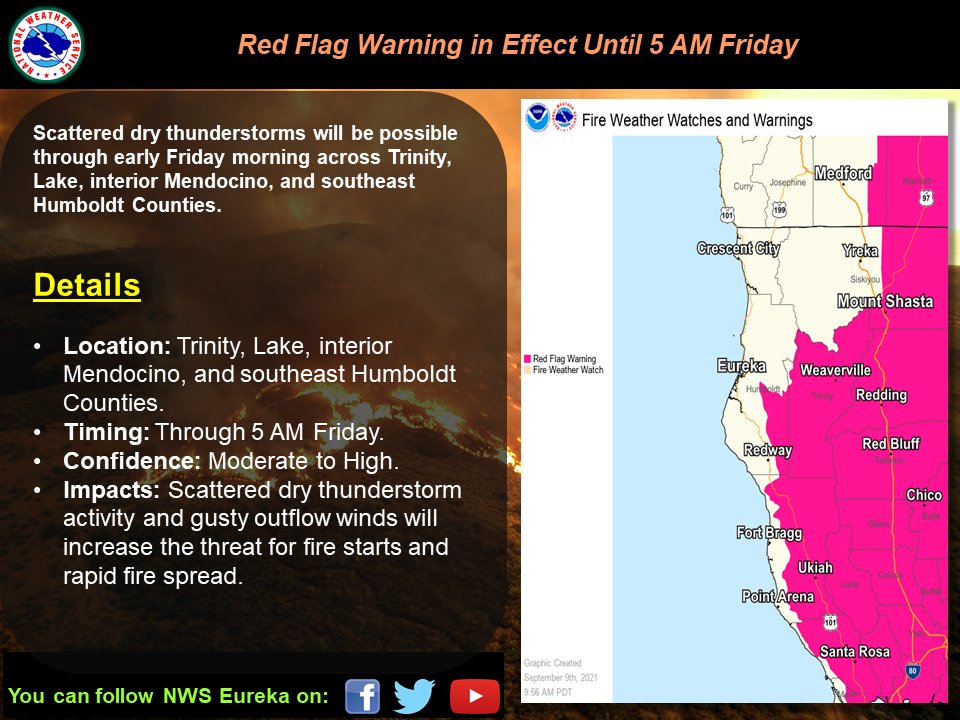 UPDATE: 9/9/21 — The Fire Weather Watch issued Wednesday due to dry lightning and high heat in eastern Mendocino County has been upgraded to a Red Flag Warning spanning most of Mendocino County, except a thin strip of land along the coast. The Red Flag Warning goes into effect at 5 p.m for Mendocino, but for other parts of the North Coast such as Trinity County it begins at 2 p.m. Weather watcher’s are expecting a rough day for the fire service:

A “flex alert” has also been issued for 4 p.m. to 9 p.m. this evening to help reduce strain on the electrical grid amid high heat across the state. You can find more details here.

MENDOCINO Co., 9/8/21 — The National Weather Service (NWS) in Eureka has issued a Fire Weather Watch for the North Coast interior, including eastern Mendocino County, due to the possibility of dry lightning in Thursday night’s weather forecast. NWS Sacramento and NWS Bay Area have also issued a Fire Weather Watch for what seems like the rest of Northern California from Redding to Napa. While the area of Mendocino County currently thought to be at risk is relatively small, fire danger is high all across the region, and mutual aid resources are already strained due to major fires burning elsewhere.

The California Independent System Operator (ISO) has also called for a “flex alert” this afternoon from 4 – 9 p.m., asking people to conserve energy to reduce strain on the grid statewide — more details here.

Locally, there’s a 20 percent chance of showers and isolated thunderstorms passing through Covelo and Round Valley between 5 p.m. Thursday and 5 a.m. Friday. Thursday’s daytime high forecast in the 90s, with a night time low below 50 and calm winds under 10 mph.  Most of the lightning is expected before 11 p.m. Things are expected to cool off slightly Friday with sunny skies and a daytime high around 85. Coastal Mendocino will be mild as usual with temperatures from the upper 40s to the lower 60s and patchy fog.