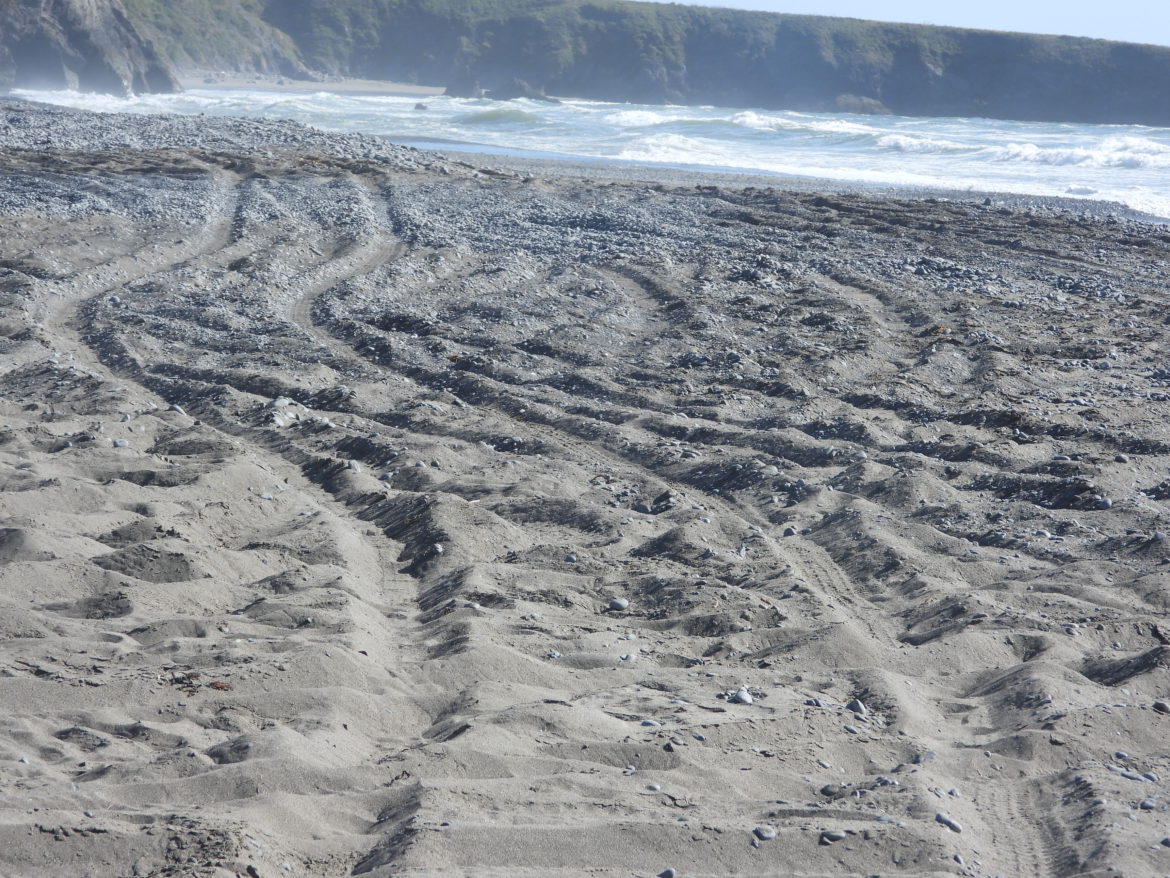 Heavy traffic use on Blues Beach shows on the beach. Cars and trucks are driven on the beach on a daily basis. State Sen. Mike McGuire has a bill that would transfer the beach and about 170 acres of coastline to a Native American non profit./Frank Hartzell

MENDOCINO Co., 9/25/21 — This week, Gov. Newsom signed Senate Bill 231, legislation that will transfer ownership of the property known as Blues Beach from Caltrans to a non-profit consisting of three local tribal governments, the Sherwood Valley Band of Pomo, Round Valley Indian Tribes, and Coyote Valley Band of Pomo. The property is around 172 acres, and the legislation, which was introduced by the North Coast’s State Senator Mike McGuire and co-authored by Assemblyman Jim Wood, will ensure that commercial activity is prohibited on the parcel and that public access to the beach remains available from sunrise to sunset.

Read our previous coverage below, and the announcement from McGuire’s office below that:

Here’s the announcement from McGuire’s office:

Sacramento, CA – Today, historic action was taken when for the first time in state history, land managed by Caltrans and owned by the state of California will be returned back to local Native American tribes with ancestral and culture ties to the land.

“This is a historic day. Returning this land of cultural significance is not only the right thing to do, but it will also lead to enhanced stewardship, historical preservation and protection of sacred sites at the Blues Beach property,” Senator Mike McGuire said. “Now that Governor Newsom has signed the legislation, we will now advance critical conversations between leaders from the three Tribes and Caltrans on a management plan for the Blues Beach property.”

The Blues Beach property is approximately 172 acres of land owned by Caltrans, which acquired most of it through the Federal Scenic Easement Program decades ago. The property is a popular spot for both locals and tourists. Its popularity and remote location has also led to challenges for the local community: Illegal encampments, cars getting stuck on the beach, an abundance of trash, and most critically – damage to Native American cultural sites.

Senator McGuire has been working with local Tribes and community members since 2019 to acquire this property, which has deep cultural significance to the native people of Mendocino County. Caltrans was interested in transferring the property, but under current state law, the Agency does not have the ability to transfer land to Tribal governments.

“This has been a tremendous partnership between the Sherwood Valley Band of Pomo Indians, Round Valley Indian Tribes, and Coyote Valley Band of Pomo Indians,” Senator McGuire said. “This bill wouldn’t have been signed without the leadership of the three Tribal Chairpeople: Chairwoman Melanie Rafanan, President James Russ and Chairman Michael Hunter. We will continue to work with each of the Tribal governments, neighbors of the property and the coastal community on the upcoming management plan.”

SB 231 will grant Caltrans the authority to transfer the property of Blues Beach in Mendocino County to the qualified non-profit run by the three local Tribes and enter into a Master Planning agreement.

The nonprofit is being organized by the Tribes for the purpose of environmental protection and cultural preservation. In addition, SB 231 prohibits commercial activity on the property and requires continued public access to the beach sunrise to sunset.