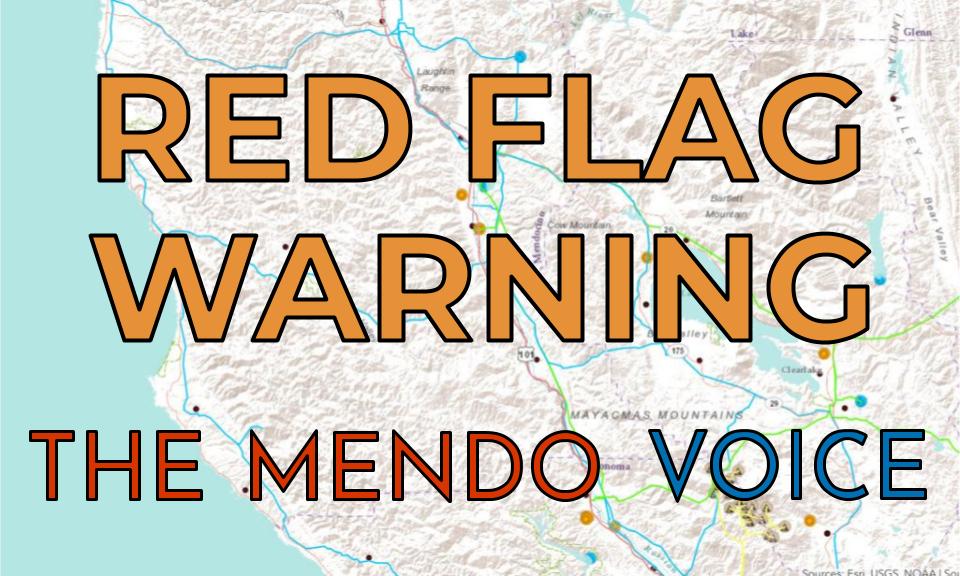 UPDATE: 6:25 p.m. — Pacific Gas and Electric will be turning off the power in parts of Mendocino County starting at 6 p.m., according to an email timestamped 6:15 p.m. If your power has been shut off as a result of the red flag weather contact the Mendocino Voice newsroom at [email protected] Two additional community charging stations have been added to the list, one in Ukiah on N. State Street, and another in Covelo at Keith’s market, as well as one in Harwood Hall in Laytonville — more details available here.

MENDOCINO Co., 8/17/21 — The National Weather Service in Eureka has upgraded the fire weather watch issued several days ago to a red flag warning, beginning tonight at 11 p.m. and lasting through 8 p.m. on Wednesday evening in eastern and inland Mendocino County, as well as portions of Lake, Humboldt, and Trinity counties. A red flag warning indicates that high temperatures, wind conditions, and low humidity can lead to increased fire risks.

PG&E has also increased the number of customers that may be facing a planned power shut-off to around 1,138 customers in Mendocino County and 48,000 across Northern California as a preventative measure to ensure that fires are not started by power equipment and lines during high fire risk weather. The current plans for a power shut-off include Redwood Valley, Laytonville, Covelo, Anderson Valley, Potter Valley, Leggett, and other locations — however, each customer represents a business or household, not necessarily an individual. PG&E has stated that customers who have signed up for notifications should have begun to receive a planned power shutoff notification; however, the number of customers included in the potential shut-offs has continued to increase over the last 48 hours. Power shut-offs are expected to begin today, August 17.

There will be a charging station set up in Laytonville at Harwood Hall, and the county has requested additional resource centers, according to an update from Brentt Blaser of Mendocino County’s Office of Emergency Services during an update to the supervisors this morning. Blaser also requested that residents be extra cautious using generators to minimize fire risks over the next several days. PG&E may also not restore power for several days once the fire weather event has passed, in order to inspect, repair, and re-energize equipment — so residents should prepare for multiple days of power shut-offs.

The Mendocino County Air Quality Management District has issued an advisory about the likelihood of increased smoke in the region and decreased air quality in Mendocino’s inland valleys and even on the coast over the next several days, due to fire activity on existing fires and shifts in wind patterns.

Here’s some important resources to check for the most current information about the upcoming fire weather and PG&E power shut-offs, as well as our general emergency resource guide. You can read our previous coverage of the planned power shut-off here.

According to the Mendocino County Air Quality Management District, air quality may be variable depending on wind patterns and fire growth over the next several days. Here’s the 72 hour advisory issued on August 16:

“Expect widespread haze and smoke impacts to continue for most of Mendocino County with increasing
impacts as we approach the end of the week. Meteorological conditions are forecast to be breezy with
shifting NE winds of lower humidity. Significant growth to the wildfires is expected to continue with
periods of heavy smoke generation. Fire weather conditions with an increase of fire activity may bring
impacts of “Unhealthy” air and smoke accumulation to valley areas. Air quality for coastal areas are
expected to be in the “Moderate” level, but may experience episodes of “Unhealthy for Sensitive
Groups” air quality later this week. While surrounding wildfires are active, expect unpredictable
smoke impacts to air quality followed by multiple periods of some relief through the next few days.”

Current weather forecast from PG&E as of August 16:

Summary:  The PG&E Emergency Operations Center remains activated for a potential PSPS event tonight into tomorrow. Read further for additional details. A weather system will move through the Pacific Northwest today into tomorrow, and dry northly winds will pick up across Northern CA after 6 pm tonight. Winds will then spread south into the Bay Area overnight and will diminish slowly through the day tomorrow. High resolution models are still indicating maximum wind gusts ranging between 30-45 mph with isolated gusts to 50 mph.  Relative humidity values during the event are expected to range between 15-30% in general. Tomorrow evening into Thursday morning, an additional weaker push of winds is expected with gusts remaining around 10 mph less than tonight and primarily staying below 35 mph. Fuels are also historically dry in some areas and very susceptible to new fire ignitions. The areas under PSPS watch are also experiencing extreme to exceptional drought currently.  Please note that the forecast map below indicates the counties that may be impacted with this event and is a high-level overview only.  Detailed maps where PSPS is being considered locally will be available here: https://pgealerts.alerts.pge.com/safety/. A low-pressure system moving onshore across the Pacific Northwest has resulted in increased onshore flow today, cooling temperatures statewide. This system will then spin over Idaho tonight into tomorrow producing dry and breezy north-northeasterly winds across the Cascades, Shasta Trinities, Sierra Foothills, Sacramento Valley, and Bay ridges, and fire danger will increase. This system will then linger over Idaho tomorrow, and a second weaker round of winds are expected tomorrow evening into Thursday, with wind gusts currently expected to remain primarily under 35 mph. Thursday and Friday a brief period of high pressure will move back into the region followed by an additional low pressure system across the Pacific Northwest over the weekend. Temperatures will remain seasonal during the period, and onshore flow will increase over the weekend with the next systems arrival. Dead fuel moisture values continue to track near historical lows for this time of year across the lower and middle elevations away from the coast and live fuel moisture content is near critical levels in many areas with current readings more typical of values found in late August or early September. The 4 Month Seasonal Outlook issued August 1st from Northern Operations and Southern Operations Predictive Services calls for normal to above normal significant fire potential through October.