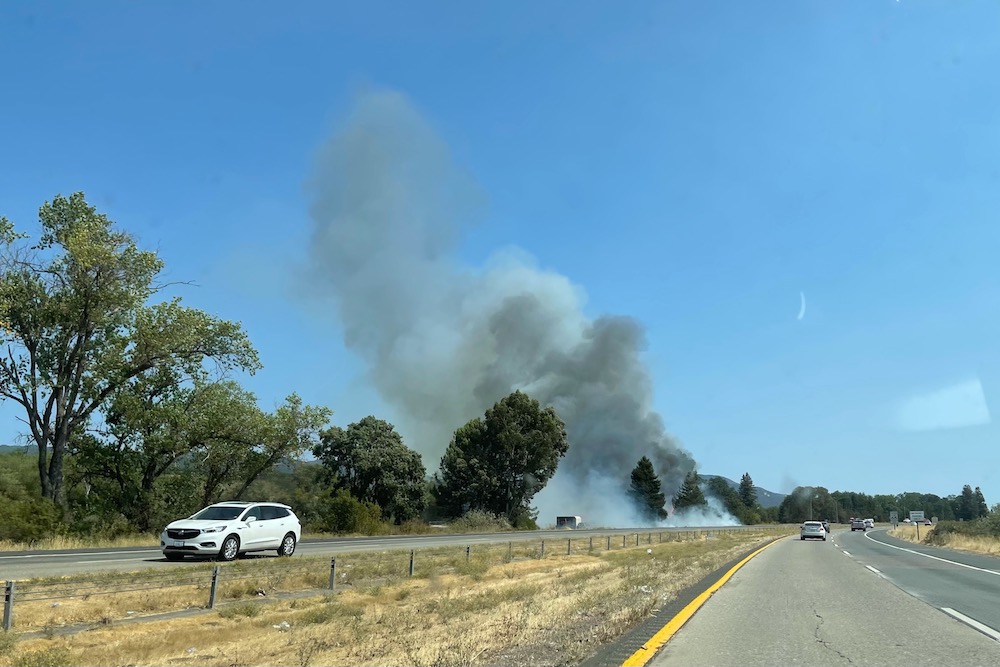 Highway Fire, from Highway 101 and River Street:photo by Chris Pugh

UPDATE 8/12/21 — All evacuation orders and warnings are now lifted, according to a Nixle alert sent by the Mendocino County Sheriff’s Office this afternoon.

6:55 p.m. — Warnings remain in place for the Vichy Springs, El Dorado, Deerwood and Knobb Hill areas, but the Mendocino County Sheriff’s Office is reporting that residents evacuated due to the Highway Fire can return to their homes.

Update: 4:35 p.m. — Scanner traffic indicates forward progress has been stopped but spot fires are still burning in the area.

Update: 4:30 p.m. — Cal Fire is responding to the fires. There are three tankers and a helicopter working in the area. First responders on the scene are using high-low sirens to aid in evacuation efforts.

Update: 4:05 p.m. — Scanner traffic indicates that evacuation orders and warnings are in the works for the area around Redemeyer Road and El Dorado Road, east of Highway 101. The winds are shifting to the south east, burning toward Vichy Springs Road.

UPDATE: 3:55 p.m. — Scanner traffic indicates that multiple spot fires are burning in the area and first responders are discussing the possibility of evacuating structures in the area. According to the California Highway Patrol, traffic was backing up on U.S. Highway 101 around 3:40 p.m.

MENDOCINO Co., 8/11/21 — Fire crews are currently responding to a vegetation fire, called the “Highway Incident” in the vicinity of U.S. Highway 101 and the Perkins Street exit, and highway traffic may be closed soon at Perkins Street. An air response is underway in addition to multiple fire crews from around the area.

At least one structure is involved and the Mendocino County Sheriff’s office has sent a Nixle encouraging residents in the area to maintain situational awareness and be prepared to leave if conditions change. We will continue to update with new information as it becomes available.