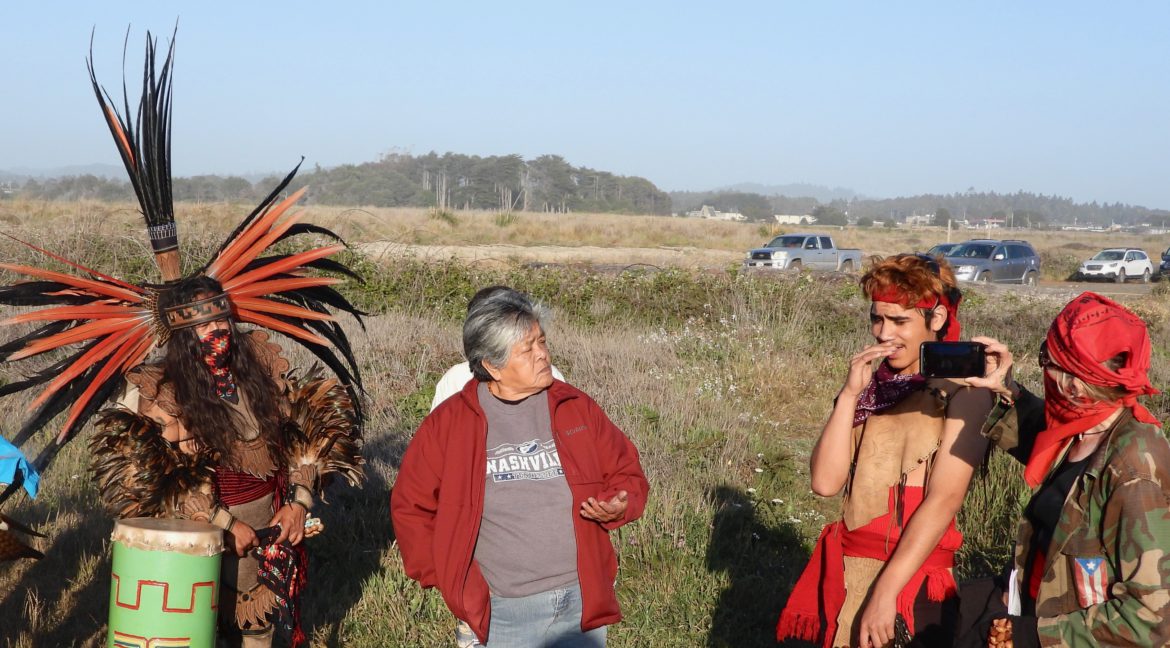 FORT BRAGG, 6/6/21 — As the sun set last Friday on the spectacular Noyo Headlands location known as “Soldier Point” and a rock called “Johnson Rock,” Native people joined together in prayers, dancing, songs and speeches and told stories of times before names were based on military conflict and economic power.

C.R Johnson is credited as the founder of Fort Bragg and several features of the town are named for he and his family. The rock, visible from a long distance in all directions, is one of the most impressive natural features on Fort Bragg’s oceanfront. It is found at Soldier Point, the westernmost promontory of the spectacular former millsite property. Soldier Point was sold by Johnson family heirs at a discounted price of $352,000 to the city of Fort Bragg and Coastal Conservancy in 2014 in the process of creating the Coastal Trail that now stretches south from Cypress Street all the way to Glass Beach.

There is nothing official or binding about giving the rock back its name, but it reflects a growing movement by indigenous people to reclaim lands and remember old ways and recover old names and old lands.

“When we give something its name back, it makes a difference…She has her name back and she is happy,” said Meadlin.

Native people and their allies from the Bay Area spent a full day with local tribes starting at the Coyote Valley Rancheria, where a law enforcement incident changed the dynamic for the day. See previous coverage here:

In Fort Bragg, Coyote Valley tribal elder Priscilla Hunter publicly thanked the Creator and said it was lucky that the Coyote Valley incident ended peacefully when the person who had barricaded themself inside surrendered.

The group tour moved to Caspar for ceremonies and to support the tree sit underway in Jackson Demonstration State Forest. In Caspar, there were calls to “rematriate” (not repatriate) the forest back into Native control and away from logging.

Then, the tour moved onto the Cypress Street end of the Coastal Trail on the former Georgia Pacific Mill-site in Fort Bragg. There, local natives exchanged greetings, songs and gifts with a traveling group from POOR Magazine, a San Francisco-based non-profit that brings together houseless, indigenous and other poor people. The youthful POOR contingent is traveling through the Pacific Northwest seeking a different way forward for “stolen lands” especially those in public ownership and advocating for salmon, forests and people made poor by the current system.

The POOR contingent’s key effort of the day was to support the Jackson Demonstration State Forest tree sit.

“This is really pissing me off,” said Hunter about the logging of Jackson Demonstration State Forest. She continued, “This is our land, it’s state land. They made a deal a long time ago with lumber companies to cut the trees. It’s a demonstration, it’s supposed to be science… Everything has changed. Now we have climate change, now we need a new direction.”

“This is the ancestral territory of the Northern Pomo and the Coast Yuki. All these people are the descendants, the remnant survivors of those people,” said Hunter to the POOR group, introducing Meadlin and others. Local Native people then introduced themselves to the group starting with their family history and including some family stories.

“It’s an honor and blessing to be here on your land. We are here to lift up your mama trees,” said Tiny Garcia, co-founder of POOR magazine while she was in Fort Bragg.

Garcia explained the mission of POOR in a personal poem/rap story.

“Prosecuted for crimes of poverty. That’s being homeless and poor in this capitalist, crapitalist system. Currently in danger of falling back through those cracks. And yet, all of us together as houseless, homeless and indigenous people. We are building houses, a school and a radio station…Everything we do is in service to these first nation folks like yourselves who are trying to take back the stories and the lands,” said Garcia. Garcia asked those with hoarded wealth to be willing to give back and help.

POOR does have a now-online magazine among its services. Young people from POOR gathered around Hunter for a communal interview on the headlands. Their article can be seen here: http://poormagazine.org/node/6160

Muteado Silencio, a prominent artist with POOR who is originally from Mexico, dressed up in full feathered Aztec gear and talked of solidarity among Native peoples from across the continent, and being inclusive of those who have been left houseless or otherwise victimized by the system. He explained that the dancing is a form of prayer, not entertainment. After the ceremony, one of the half dozen children on hand could be heard trying to reproduce Silencio’s crisp and rousing cry that he used to accentuate key points others made during the event.

Polly Girvin, partner of Hunter, said she was lucky enough to grow up in the Civil Rights movement in Berkeley and said people of all backgrounds need to work together to change the current inequities, like the Freedom Riders, Dr. Martin Luther King Jr. and others did.

“It’s an arc of social justice and we are happy to stand here with multiracial people from Oakland and elsewhere,” said Girvin.

The event was communally focused, without anyone seeking to control the flow, and with music and song erupting spontaneously. There were about 60 people gathered on the former millsite during the evening event. The tour was communally organized with local activist Andy Wellspring helping link POOR magazine with local natives.

“I hate to say the term white people, but it’s great to see many people gathered here with us today,” Hunter said, extending a hand and smile to the audience filling up the paths, which were otherwise unused or avoided even during such a stunning sunset Friday.

“We know that has to happen as we move forward, that we come together,” Hunter said.