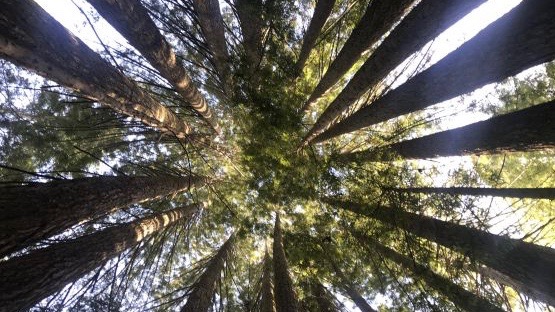 FORT BRAGG, 6/20/21 — Anderson Logging Inc. has ceased logging in Jackson Demonstration State Forest citing safety concerns about protesters being in active logging areas while trees were being cut, company president Myles Anderson said. The hiatus has been in effect since late last week and no logging is to commence on Monday in Caspar as summer officially begins. (Read our past coverage here)

“We don’t want to hurt anybody. Can you imagine one of our guys out there trying to provide for his family and his work ends up killing somebody? He would have to live with that the rest of his life. He didn’t choose to be in the middle of this,” Anderson said in an interview.

Because the 48,000-plus acre Jackson Demonstration State Forest is publicly owned land with many public trails, Cal Fire has had to create special closed areas within JDSF for the timber harvest (designated as the Caspar 500 Timber Harvest Plan). Protesters have entered those areas, creating a situation with risk for themselves and potential liability. The general public has also wandered into the active harvest areas, according to the protesters.

“We are trying to work according to the terms of an approved harvest plan that’s gone through an extensive legal process. But once people who don’t understand that process trespass into a closed area and put themselves in danger, that has stopped our ability to work,” Anderson said.

Anderson believes it will take intervention by law enforcement or Cal Fire to restart logging.

“We are constantly asking Cal Fire, the Sheriff’s Office and the [California Highway Patrol] to close the area, and as of now they’re refusing to do so, ” Anderson said on Saturday. “They put it on us to try and figure out how to make it work. That’s asking a lot of small business,” said Anderson.

Protesters say they will still keep coming to the forest to block any possible logging until they get something in writing from Cal Fire saying logging has stopped and even then, lookouts will remain.

“Good news! Our woods-direct action has stopped even the attempt to log on Thursday and Friday of this week. Since the start of logging in THP 500, we have done everything in our power to keep the trees standing. We have been out in the woods everyday before logging starts using our bodies to block gates and even entering active logging sites when necessary,” wrote Mendocino Coast activist Anna Marie Stenberg, 74,  to an email list of press and activists. In an interview, Stenberg said the protesters will continue to be in the forest despite the announcements just to be sure no trees are being cut.

A protest action is scheduled for Monday morning. Stenberg said a woman walking a dog and two men on bicycles entered the logging area near road 666, as well as some protesters who have been trained on how to remain safe.

There are several different groups of protesters who have been at work for the past month trying to block, delay or end the logging that has proceeded intermittently while protests were under way.

One coalition of activists, led by the Mendocino Trail Stewards, is seeking solutions through official channels. The Stewards have also been out in the forest cleaning up trash on a regular basis.

The Mendocino Trail Stewards coalition staged a protest on Saturday on Fern Creek Road in Caspar, in an area away from the logging but close to HIghway 1.

Local tribes are also involved separately, with Cal Fire currently in the process of consulting with the leaders of two local tribes, including the Coyote Valley Band of Pomo Indians. A more loosely organized group of protesters, led by Earth First! — including many prominent activists who participated in Redwood Summer protests of the early 1990s, such as Stenberg — have been engaged in non-violent civil disobedience, such as locking themselves together to block roads and entering the active logging areas. These protesters have pledged to do everything possible non-violently to slow or stop the logging of trees they see as vital to the health of the forest and humanity’s efforts to combat global warming.