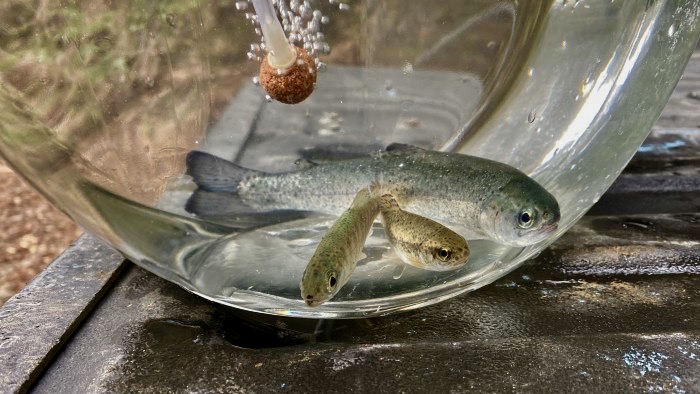 NAVARRO, Calif., 4/8/21 — Peak season has just begun for out-migrating salmonid species in Mendocino, it’s the busiest time for travel for smolts — coho, chinook, and steelhead swimming down various tributaries to the mainstems of the Navarro, Noyo, Garcia, and several other small rivers along the North Coast and then out to the Pacific. These salmonid species, which once flourished in the region, are in trouble. Due to centuries of pollution, damming, development, and logging, among other things, that began with European settlement, the fish numbers have plummeted from hundreds of thousands, maybe millions, to mere thousands and climate change hasn’t been helping the salmonids cause.

Central California Coast coho, a genetically distinct subset of coho salmon that live in rivers from Aptos Creek in Santa Cruz up to Usal Creek in Mendocino, are endangered under the Federal Endangered Species Act. And Central California Coast chinook and steelhead, also genetically distinct subsets habitating the same region, are federally threatened.

But it’s not all bad news. Across their range, people are hard at work trying to protect and rehabilitate these species, which are important to commercial and recreational fishing industries, have cultural significance to Native people, and are crucial to the health of our watersheds and redwood forests in Mendocino.

So on Tuesday morning, we went down to the Navarro with scientists that work within the California Coastal Monitoring Program, to check out some of the efforts being made to bring back the fish to a stable population size

The monitoring program works with federal, state, and private entities, including the National Oceanic and Atmospheric Administration, California Department of Fish and Wildlife, and Mendocino Redwood Company, to track the health of salmonids in rivers from the border with Mexico to the border with Oregon.

The data they collect is crucial to understanding the health of coho, chinook, and steelhead, providing the necessary information to guide rehabilitation plans and grow the species population

On a sunny morning on the banks of the Navarro river, fisheries scientist Katie Webster picked up a small, silvery fish, no bigger than her hand, out of a white plastic bucket. With the finesse and speed of an expert, she took a tiny razor blade and pricked the fish right behind it’s pectoral fin, placing a microchip, or “tag” under the skin.

Every year, thousands of salmonid — coho and chinook salmon and steelhead trout — migrate from their birthplaces in small tributaries, and swim downstream, out to the ocean, where they spend their adolescence. Almost every day during migration season, Webster heads down to Navarro to track the fish on their journey.

Coho and chinook salmon, and steelhead trout used to be so plentiful that legend says one could walk across the rivers on the backs of the fish. Now, only around 1,500 to just over 15,000 adult Central California Coast salmonids swim from the ocean back to their birthplace tributaries to spawn each year in rivers from the Garcia to the Usal Creek.

Scientists from the California monitoring program capture, tag, and release the salmonid fish at what are called “life cycle stations.” The station on the Navarro is split into two sections. The first is the “rotary screw trap,” a device that sends fish through a large funnel and into a “live box,” that collects the migration smolts — fish that are going out to the ocean.

The second section is like a fish weigh station, where scientists like Webster measure the fish and tag them before sending them back to the river to continue their swim to sea.

“We check the trap every day,” said Sarah Gallagher, senior environmental scientist for the California Department of Fish and Wildlife Coastal Fisheries Program. “So we get fish abundance estimates and we know how many are actually leaving the [freshwater] system and then what their survival rates are. It’s really important to understand what the populations of the salmon are if we ever want to be able to recover them. We can’t really manage what we don’t know.”

Tracking the health of the salmonid population is important in itself, as the fish play notable roles in the local economy, ecology and culture. But the health of these fish species tells a bigger story too. The state of coho, chinook, and steelhead reflect the condition of the entire watershed. They also play a crucial role in the ecosystems they call home. Without them, the entire watersheds they live in would likely be altered.

For example, after these fish return to their birthplaces and spawn, they decompose in the river, releasing nutrients that redwood trees need to survive. In turn, redwood trees shade the rivers, keeping them cool for the salmonids.

Needless to say, salmonids are very important, but as with just about everything else, climate change is making life more difficult for the fish. Low summer flows, warmer river temperatures, winter flooding, and changing ocean conditions all make it more challenging for coho, chinook, and steelhead to survive and thrive. And the success of these salmonids could be a bellwether for the health of the entire river systems they inhabit.

“This climate changing climate is probably one of the biggest challenges that we’re all facing,” said Gallagher.  “And the salmon are facing it as well.”