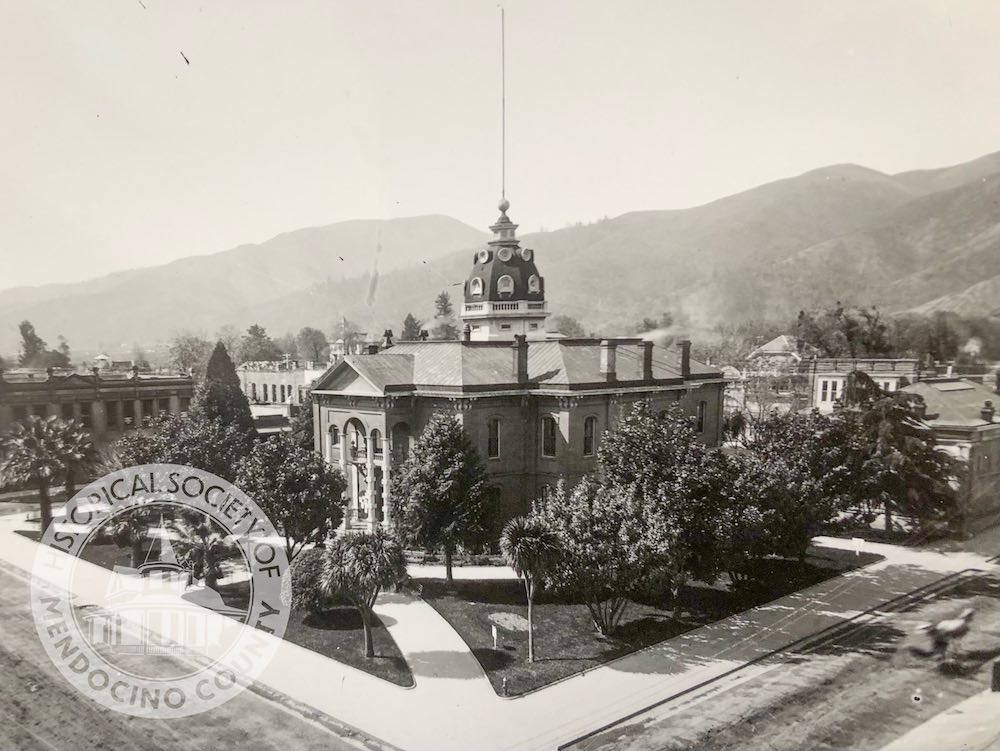 Editor’s note: We’re starting a new history feature in collaboration with the Historical Society of Mendocino County to share local history from the organization’s archival collections. Let us know what you think and what kind of local history you’d like to read more of at [email protected]

FORT BRAGG, April 5—With the north wind blowing a terrific gale, Fort Bragg was threatened by a serious fire Sunday evening when the former Finstrom home at the corner of Pine and McPherson streets was burned.

The wind carried sparks and parts of burning shingles through the air for several blocks. Two nearby houses caught several times.

Ukiah Dispatch Democrat
April 14, 1921 – Sandelin to Fight; Trial Has Been Set for April 27

A bunch of Mendocino county men were in attendance at the field day held by United States Judge Van Fleet at Sacramento the first of the week for those luckless individuals caught in the prohibition net spread several weeks ago. Mendocino County was not the only part of northern California represented at the hearings, however. There was a total of 178 defendants, gathered mostly from the Sacramento valley. Deputy Sheriff Ward Ries, who represented the forces of law and authority for this county at the hearings, states that of this total fully 150 were foreigners not yet admitted to citizenship, or who had been naturalized, there being few native-born American citizens.

Frank Sandelin, of this city, was the only one of the accused from this county to enter a plea of not guilty. His trial will be held at Sacramento on the 27th, a week from next Wednesday.

The others all entered pleas of guilty. Charles B. Haynes, who ran a still at Fort Bragg, was given 60 days in the county jail at Sacramento. Abel Dorffi, the 71-year-old still operator of Noyo, got a fine of $150 or 60 days to be served in jail at Ukiah and was given a stay of execution for a week to enable him to raise the money. Pete Martella, of Fort Bragg got a $250 fine for bootlegging. H. S. Kenney got a $200 fine on the same charge. Andrew Del Carlo, of Fort Bragg got a 90-day jail sentence and a $250 fine on top of that, for bootlegging. A humorous feature of this case lies in the fact that Del Carlo pled guilty after a Fort Bragg jury turned him loose on this same charge when he was tried under the municipal anti-booze ordinance there, giving as their reason that they believed the sale for which he was tried was made a few hours before the municipal ordinance was passed.

Two cases which came up before Judge Dooling in San Francisco resulted in fines. They were those of John Aylward, of Fort Bragg, who was fined $250, and John Ferrera, of the same place, who got $150.

Judge Van Fleet treated the Mendocino county men much better than he did a bunch from Chico and Redding whose fines ran all the way from $400 up to $1000 and some of whom were given jail sentences to boot.

The judge read the riot act to all the local men, telling them never to let him see their faces before him again on any charge, and intimating that the full penalty of the law would be meted out on their next appearance.

The insurance adjusters have placed the loss at $429.60 as the result of a fire which occurred in the clerk’s office in the county courthouse last Tuesday morning. Some of the woodwork, part of the carpet, an old wooden cabinet, a considerable amount of stationery and supplies and some records of minor or no importance were destroyed.

The fire is believed to have started in an old box full of papers behind the stove. Jack Dreyer, the janitor, had built the fire about eight o’clock and gone about his duties. He was informed by a passer-by that a great deal of smoke was coming from the clerk’s office about 8:30. Thinking it was from the fireplace which smokes badly at times, he nevertheless investigated and discovered the flames which were in the inner room and which had spread to alarming proportions. He summoned the chemical and by the time it had arrived, had got a garden hose through a window and had the flames under control.

George Lambert, who drives the fire truck, completed the job with the chemical.

UKIAH—Mumps, measles, whooping cough and other children’s diseases continue to run riot among the children of the town. A large number are down with measles and mumps and two of the grammar school teachers have been victims of the latter disease the past few weeks.

There seems to be no remedy for the situation, and the attendance at the grammar school is suffering sadly.

The Historical Society of Mendocino County, located in Ukiah, California, is a non-profit that collects, preserves, and shares the diverse history of Mendocino County. On-site is the Toney Archive, which houses their collection, and the Held-Poage Memorial Home. They are currently fundraising to digitize their collection. Contact them for more info at email: [email protected], phone: (707) 462 – 6969, address: 100 S. Dora St. Ukiah, CA 95482.