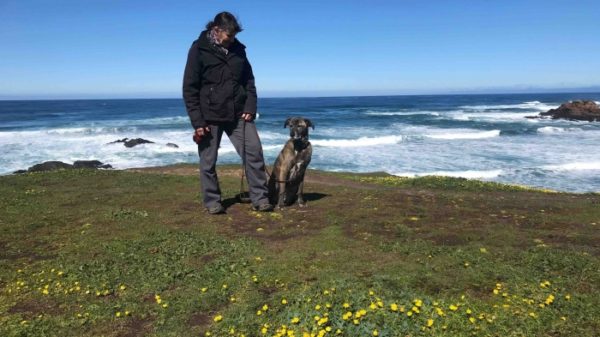 Teresa Sholars standing on the bluff above Glass Beach on the north End of Fort Bragg March 11, 2021 (Lana Cohen / The Mendocino Voice)

“It happens to be botanically, one of the best places on the Mendocino coast to see wildflowers,” she said, bending down to point out two early bloomers.

Wildflowers are popping up across the state, the poppy being the most notable and popular flower, as well as the state’s official flower. But on the Mendocino coast, there’s a whole other world of wildflowers, some of which are unique to the region

On a crisp, sunny day in mid-March, Sholars, an energetic local ecologist, took me out to a bluff just south of Pudding Creek. Walking out towards the ocean, she stopped to point out a little yellow flower, a tiny daisy, surrounded by blades of lush green grass.

“This little yellow plant doesn’t really have a common name, but it is called Blennosperma,” she said. The lemon colored daisy, that’s head is no bigger than a dime, grows only on a bluff just south of Pudding Creek, and in Point Reyes.

“So this is one of those rare individual species that you have thousands of individuals in only two localities in the world,” said Sholars.

Sholars has lived on the Mendocino Coast for 50 years, studying the diverse ecosystems that make up this corner of the planet, and teaching about them at College of the Redwoods. One of her many areas of expertise is local wildflowers. Right now, little vibrant flowers are popping up along the bluffs, marking the beginning of spring.

“So the whole headlands community is a mosaic of various different wildflowers and native grasses that are adapted to wind and salt,” said Sholars. “You’ll have sunflowers as early as March and it will actually go all the way to August with different groups flowering.”

Blennosperma, the little yellow daisy, is one of the first wildflowers to pop up each spring. It’s better adapted to and happier in colder weather than most of the other wildflowers that grow on the bluffs, so they bloom in February and March, before the other flowers and grasses around them start growing big and tall with the help of warmer weather and more sunshine, stealing all the little daisy’s sunshine. So the Blennospermas, which look fragile against the backdrop of the tempestuous Pacific, are just a sneak peak into what the rest of the season will look like.

“It’s pretty cool that we have a plant that is so rare here in Fort Bragg and so beautiful and it’s able to take advantage of the time that it’s cold,” Sholars said.

Mendocino is home to a variety of rare and unique flora and ecosystems largely due to its noteworthy geology and climate. Sholars explained that coastal Mendocino from the Navarro River to just north of Fort Bragg is made up of five distinct terraces, slabs of land that were pushed up out of the ocean by tectonic plate movement between 100,000 and 500,000 years ago.

Mendocino’s terraces are unique because they were uplifted from the ocean flat, so they create a staircase-like structure rather than the continuous mountainous slopes that make up the landscape just to the north of us and just to the south of us.

Because the terraces are flat, soil doesn’t easily mix between them. As a result each terrace has a distinct ecosystem, which is part of the reason we end up with windy headlands with their coastal scrub along the ocean, and then, just across Highway 1 the land transforms into a sunny fir and pine forest, and then just a tiny bit further inland towering redwoods shoot up from the ground and deep green ferns line the forest floor.

The terrace that makes up the headlands is the youngest terrace, at around 100,000 years old. The unique terraces and the ecosystems they create are actually what first brought Sholars to Mendocino from Davis in the 1970s. “Any place that has a diversity of wild plants and animals is something to be studied, appreciated and be awe-inspired by, and we have too little of those kinds of places,” said Sholars.

Standing backs against a blustery March wind, I asked Sholars when prime wildflower season was. When to go to see the best, most colorful scene. She responded, but she didn’t quite answer my question.

“It’s kind of like asking me what’s my favorite fruit, well apples, yeah during apple season, is it kiwis, yeah during kiwi season, how about oranges? Yeah during orange season,” she said. “Right now is the beginning of wildflower season for these Blennosperma and baby blue eyes, in a month you’ll have the pinks and blues of the checkers and the lupines in the summertime I mean April and May are just awesome here, you probably have more land covered with flowers then, but it is spectacular pretty much from March to August in my opinion.”

One thought on “Wildflower season has arrived in Mendocino. A local ecologist shares her knowledge of the springtime blooms”