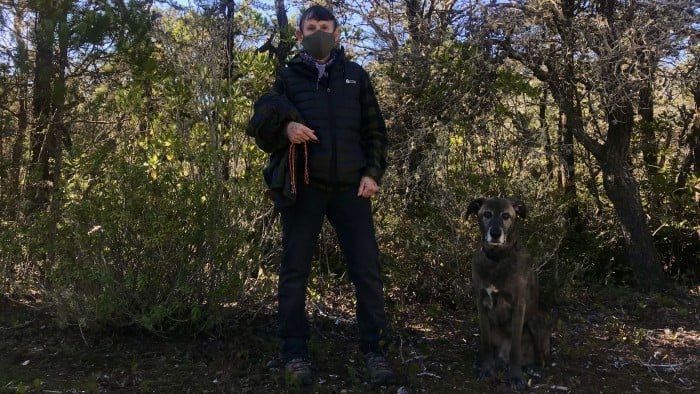 LITTLE RIVER, 2/16/21 — It was almost 50 years ago that Teresa Sholars first found her way to the Mendocino Coast. On weekends in her 20s, she would leave early in the morning from her home in Davis, California, where she was working towards her masters degree, and drive four hours through grassland, redwoods, and mountains until she reached Mendocino’s pygmy forest ecosystem — a miniature forest made up of gray, scraggly trees with trunks no thicker than the handle of a broomstick and no taller than the average adult.

Sholars was there on a mission to figure out why the trees in the pygmy are so small.

Only an estimated 2,000 acres of pygmy ecosystem remains on the planet, and all of it lies along the Mendocino and northern Sonoma Coasts. Sholars is a leading expert on the pygmy forest and a range of other Mendocino Coast ecosystems. Not only has she researched them, she’s spent almost 50 years walking through the sunny pygmy forest, foraging for mushrooms under the dark, cool cover of Redwoods, and studying wildflowers on the bluffs that overlook the Pacific. But the unique pygmy forest is the ecosystem she knows best, the one she is most attached to, and the one that first brought her to this corner of the world.

“I’m 68 and I moved here when I was 22,” she said, standing on a sunny logging road near Mendocino town that cuts right through the pygmy forest. “If you stay in one place for a long time you get to really know it.”

Each decade since Sholars arrived, in the 1970s, she has chosen a different ecosystem or group of organisms to study — redwoods, mushroom, lichen, among others. “Being able to be here for so many years has really created a challenge for me and wonder about all the different ecosystems. It takes a long time to learn this stuff and appreciate it and understand all the diversity that’s in one locality.”

When Sholars was working on her masters research project 1974, no one knew why the trees in the pygmy forest were so small.

To discover why the pygmy’s trees were so short, Teresa decided to dig deep. Literally, she dug thousands of holes in the soil in order to find out what was going on in there and how it might be impacting the trees. However, she couldn’t get very far. About a foot and a half down, she consistently hit something solid. The soil in the pygmy is hardpan, which explains why she couldn’t dig into it. Hardpan is created when the ground is flat, so rather than soil moving and flowing over years with storms and wind, it stays put and consolidates, becoming concrete-like.

Ultimately, Sholars found that the soils tough, rock-like nature is not the main reason the pygmy trees are stunted, but it certainly didn’t help the trees grow and it is related to why the trees in the pygmy are miniature

Most areas along the Mendocino Coast and in Northern California are steep and hilly. But that’s not true for the pygmy. In a small stretch of land that runs sporadically from around Salt Point in Northern Sonoma up to Fort Bragg, the land is flat.

Sholars explained that between 500,000 to one million years ago, the floor of the pygmy forest was uplifted by tectonic forces. And rather than being uplifted into a mountain or hill, it was uplifted as a plateau. Flat uplift is also why the Mendocino coast has cliffs and bluffs that lead down to the ocean rather than mountains that pour into the Pacific.

Since the pygmy was first uplifted many years ago, it seems it hasn’t been tilted one way or another or deeply fractured. Consequently, the land has sat exposed to the elements, with only tiny trees protecting it, for hundreds of thousands of years. Over time, this exposure leached the soil of nearly all its nutrients, making it almost inhospitable for life. But only almost. A small community of plants that now populates the pygmy, Bolander pine and Mendcino cypress among them, seems to make it work.

“Pygmy cypress or Mendocino cypress can be just a few meters tall and 100 years old in poor soil or can be 100 feet tall in good soil. So the dwarfness of all these individual plants is because the soil is very nutrient deficient so it creates this vegetation or landscape of plants that don’t grow very tall.” So although the pygmy trees will never stretch dozens of feet into the sky, the manage to thrive in their own, special, tiny form.

“For instance, this pine here only occurs in the pygmy forest,” said Sholars, touching the needles on a pine tree no more than five feet tall. “It only grows from Fort Bragg to around the Navarro River.”

Although the 500,000 year old soil may not be the most hospitable place to put down roots, it has created a unique and cherished ecosystem along the Mendocino Coast.

“When you have soil that’s half a million to a million years old, that’s very unique. It’s incredibly rare and anytime something is rare it will make rare plants and habitats for rare animals. Then those rare animals will provide food for other species, so there is a whole web of life that is dependent upon the uniqueness of what is here.”

7 thoughts on “Teresa Sholars came to study the pygmy forest in the 1970s, the one of a kind ecosystem has kept her busy for 50 years”