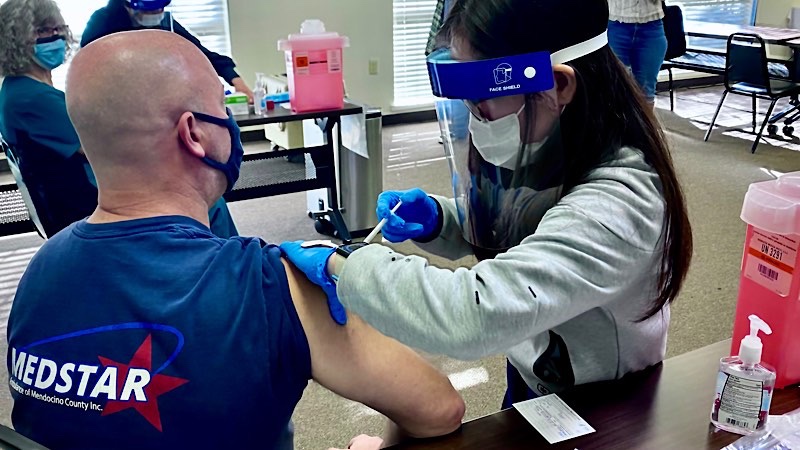 WILLITS, 1/19/21 — A batch of the Moderna COVID-19 that was deemed to have a higher risk of eliciting an allergic reaction, made its way to Mendocino County, where both the County of Mendocino’s Public Health Department and Adventist Health administered doses of the vaccine amounting to a few hundred. However, though some people have had mild reactions, largely in keeping with the normal range of reactions resulting from inoculation, no severe reactions to the vaccine have been reported in Mendocino County. It should be noted, the reactions associated with this bad batch have been allergic reactions, similar a food allergy or the like, and not a unique kind of reaction associated specifically with vaccines.

Dr. Erica Pan, chief epidemiologist for the State of California, warned Sunday that a batch of the Moderna vaccine was resulting in a higher than normal level of allergic reactions. Pan then said that “out of an extreme abundance of caution” the state was saying that the vaccine should not be administered. However, this warning came late, and both the Public Health Department and Adventist Health administered a large number of doses from this batch. Moderna is conducting an investigation into the batch, and because of a scarcity of vaccine, that batch is currently considered “paused” rather than recalled.

According to Adventist Health spokesperson Ceci Winiger, Adventist Health vaccinated approximately 300 people in Willits this Sunday, and all of them received a dose from the batch in question. This mass vaccination clinic was for people 75 and older. However, she noted that people are held and monitored for 15 minutes after receiving the shot, and that, similarly to a person with a food allergy ingesting food, the allergic reactions generally occur in those few minutes immediately after the inoculation is administered.

According to Winiger none of the people vaccinated showed any such symptoms. Some people who were vaccinated at that clinic have spoken on social media, and reported to the Mendocino Voice, that they did experience substantial systems. However, those symptoms mostly appear to be in the range of normal symptoms that occur in the days after receiving the vaccine, as the body’s immune system ramps up.

Public Health also administered about 100 doses of the bad batch on Jan. 7, at a mass vaccination clinic in Ukiah. They also report no adverse reactions.

Below are the statements from both organizations.

Here is a statement from Adventist Health concerning the vaccination:

A correction to our previous post: As you may have seen in the news, one lot of the Moderna vaccine was reported to have higher than expected allergic reactions immediately after administration or during the time of recommended observation. Fortunately, none of the patients who received the Moderna vaccine during our vaccine clinic yesterday, January 17, at Redwood Medical have adverse reactions. During that clinic, our team followed the specific guidelines for administering COVID-19 vaccines and monitored our patients for at least 15 minutes to ensure their safety. During that time, there were no adverse reactions reported or observed. Out of an abundance of caution, we are reaching out to those patients to check on their well-being. There have not been any complications or severe reactions reported at this time. More than 300,000 doses from this lot were distributed across the state and a very small percentage have experienced complications. Rest assured that we will continue to follow these recommended guidelines to keep everyone safe.

Here is a statement from the County of Mendocino concerning the vaccination:

Dr. Erica S. Pan, the State of California’s lead epidemiologist notified counties on the evening of  Sunday, January 18th that the use of a specific lot of the Moderna vaccine should be “paused” due  to the possibility of higher allergic reactions, as evidenced by a San Diego County Moderna  vaccination episode.

The batch in question was used at a mass vaccination event in San Diego, where six healthcare  workers experienced allergic reactions to the Moderna vaccine. Dr. Pan states no other batches  have been identified with increased reactions.

“The county has reviewed the lot numbers administered through our mass vaccination clinics as  well as the inventory stored in our freezer. Upon further review, we are confirming that 100 doses of  Mendocino County Public Health’s Moderna vaccine associated with the batch the state is  concerned with were used at a vaccination event at the Redwood Empire Fairgrounds on January  7th,” says Vaccine Coordinator Adrienne Thompson.

According to Thompson, all 100 doses were administered at the event and comprised a separate  order from the State. No adverse reactions occurred. “County staff will be contacting all 100  individuals that received a vaccine with this lot number to alert them of the recall. No other side effects have been noted from use of this vaccine.

With regard to the tracking of vaccines, Mendocino County Public Health is responsible only for  vaccine allotments distributed by the State to Public Health.

The state separately allocates and distributes vaccine allotments to Adventist Health, to pharmacies  and to Indian Health Clinics. It is up to those healthcare entities to administer, track and report all  vaccine data to the state.

“Mendocino County does not have access to their vaccine information or their lot numbers,” notes  Thompson. “However, these other vaccine providers are continuing to review their Moderna  inventory to compare their lot numbers against the state-identified batch in question.”

Mendocino County Public Health Officer Dr. Andrew Coren states that because these are new  vaccines, events such as this are not unexpected, and should not deter the public from getting  vaccinated.

“This isolated event has not increased the percentage of vaccine reactions, which continue to be  about one person in 100,000. Getting vaccinated continues to be the best way for all of us to help  move beyond this virus and return to a normal way of life,” he concludes.

The county’s website, Facebook and Twitter pages are the best way to keep updated about  vaccinations and all issues related to Covid-19. For specific vaccine-related questions, please  phone Mendocino County’s vaccination hotline at (707) 472-2663 or email  [email protected].

One thought on “Mendocino Co. & Adventist Health administered doses of Moderna vaccine that has since been “paused””