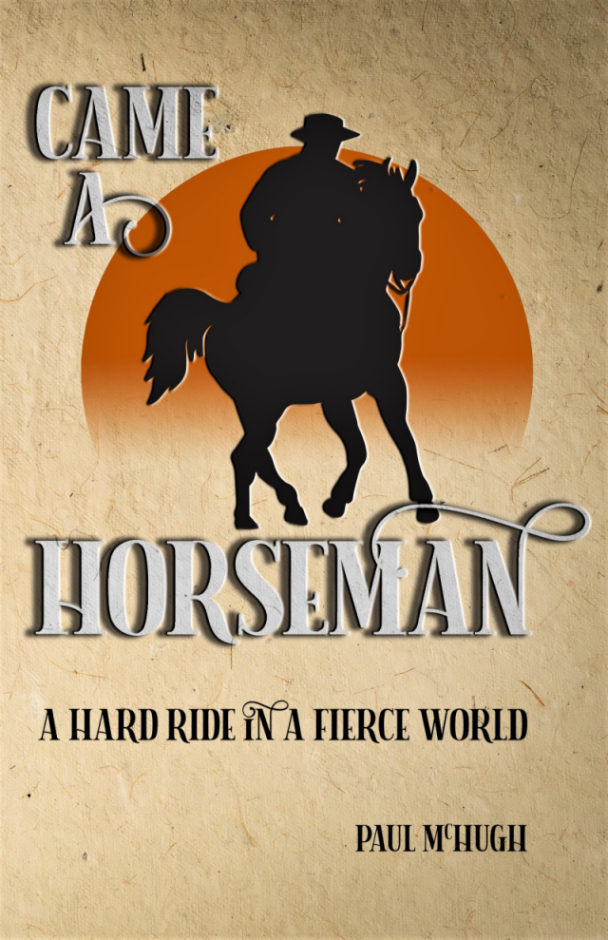 The cover of the novel "Came a Horseman," by Paul McHugh.

MENDOCINO Co., 1/20/21– I sat down with author Paul McHugh a few days ago in Ukiah’s McGarvey Park for some socially-distanced BBQ sandwiches and a conversation about the ideas and the historical figures that went into his most recent novel, published this year by Elkheart Books. He’ll be taking more questions at a Facebook live reading at Gallery Bookshop in Mendocino on January 21.

In the future, as author Paul McHugh imagines it, a massive solar flare has knocked out the entire planet’s electric infrastructure, plunging the populace into gang warfare, backwoods clannishness, and a reliance on primitive weapons and trade routes plied by wagons.

“Plagues have been done,” McHugh mused, when asked about his choice of apocalypses. “In fact, we’re doing one now. Climate change is too real to fictionalize…I don’t want to do a conventional apocalyptic story, where while you’re reading the story, buildings are falling, people are screaming, etc. What I wanted was an apocalypse that would shake up the gameboard, show how people are playing ten years afterwards. To me, the most interesting part is: how do you cope? Who’s doing well, who’s doing poorly, and why?”

One answer to this question is the novel’s protagonist Kyle Skander, an indoor pot farmer turned philosophy professor at Humboldt State University, and a veteran of the famous War at HSU. The novel is sort of a North Coast-western, maybe a thriller, definitely a mystery, and, if it had lingered too long in another setting, also a dystopian-future horror story. Most of all, it is well within the tradition of adventures that happen to a member of the well-educated warrior class on his way home. Standing in for mythic  Troy, which we glimpse in a flashback, is the urban Bay Area, and his out-of-the-way but troubled home is Arcata, not Ithaca. But Usal Creek, which is more or less where he wrecks his kayak, is no Calypso. Which is fine, because he’s not quite Ulysses. I asked for more about who Kyle Skander is: his philosophy and his place in the world.

“Skander refers to Alexander,” McHugh divulged, as we soaked up some unseasonable sun. “And Kyle means channel…I think probably one of the things that happened with Alexander in his early days is that people really didn’t understand what they were dealing with in his personality. Not even his father, who didn’t believe he could break the stallion Bucephalus, when he was a kid, when he was in his teens, and he was able to do it.”

It’s not giving away too much of the plot to say that a mighty, unrideable stallion named Buck plays a pivotal role in a story about a horseman. That, and a certain amount of military genius.

But back to Alexander the Great, who is busy being channeled by an ex-professor with a giant attitude. McHugh acknowledges that Kyle Skander can be just a tiny bit of a pain in the ass: “To some people, my character Kyle might seem overbearing or unbearably insouciant, no matter what happens to him, but that’s how Alexander was,” he insisted.

Like Alexander, whose private tutor was Aristotle, Skander has a brilliant mentor. In his case, it’s his father-in-law, a senior philosophy professor named Roy Fisher. Any time Skander finds himself washed up on inhospitable shores, alone in an equally inhospitable prison cell, or scanning the terrain for homicidal maniacs, there’s a memory of Fisher, counseling him about how to use his senses and emotions as input to come up with a rational response or a strategy of war.

Fisher has prepared Skander perfectly to be an amateur sleuth in the apocalypse, charged with clearing his own name to find a killer, which is like the weird little gizmo on your Leatherman that you never need until you really, really need it. With his “Logic of War” class at Humboldt State University, regular wallopings at chess, and a curriculum crammed with meditations on violence by the likes of Marcus Aurelius, Molly Ivins, and Robert E. Lee, the old man has turned the younger into just the guy to serve as an ad hoc commander for a small community along the wooded shoreline of the Lost Coast, under siege by a madman. While solving a murder, of course.

In fact, everyone seems pretty blown away by Skander’s strategic insights and his facility with aphorisms on the nature of good and evil, which doesn’t make it too difficult for him to be the smartest guy in the room.The rooms here consist of treehouses belonging to the “Tribe,” a band of former trimmers and outlaws who have become an unruly band of polyamorous, dope-smoking, mounted hunter-warriors, and ceremonial chambers belonging to the Elysians, an agrarian Christianity-based cult. It’s easy to imagine, based on contemporary Mendo, how those two particuar groups might sort of get along, without a ton of awe and admiration for each other.

Now, I’ve been on trim crews where ruminations on the nature of good and evil got fairly deep, though maybe not in a way that was academically rigorous; and I grew up with pig hunters, who know a thing or two about deadly strategy. So, I asked McHugh why Skander seems to be the only one with any real smarts, and if that’s due to the loss of learning in the future he’s imagined.

“The quick answer to that is, I’m telling a story,” he laughed, enjoying the authorial privilege of a former journalist who spent thirty years hewing to the facts and can now make up an entire world if he wants to.

So he talked about Roy Fisher, who was better at everything than the insouciant young protagonist. “That kind of keeps Kyle from being the only guy who’s outside of the box,”  he said. “To go back to the box, though, and his status as Alexander, Alexander always took everyone by surprise…he out-thought armeries that were ten times his size. When you’re dealing with genius level, you’re dealing with genius level.” Part of this is writerly technique: “The plot of a thriller has to be propulsive. So if you’re writing a thriller that’s a novel of ideas, it can’t be ‘‘My Dinner with Andre.’ It’s going to be wall-to-wall ratiocination.”

Skander is very much an applied logic kind of character. “Rationality is not an epiphenomenon,” McHugh reflected, after being asked to sum up Skander’s philosophy. “It’s not something that’s king of a magical outgrowth from coincidence. To a Greek philosopher, especially a Stoic, reason, logic, is actually at the heart of existence. It’s almost like a Buddhist idea: everything is basically enlightened. It’s only when we become confused that things become confusing. So to a Stoic, the emotions are interesting, but they’re never allowed to be dominant.”

We do get to see Skander struggle for that dominance, not always with perfect success.

He’s involved with another struggle, too, one on a civilational scale, which we glimpse in a few quick biographical sketches. At one point, Skander invites another character to visit him sometime at HSU, where he and others are working to restore the library, including his prized philosophy books and the old movies his granny loved.

So what’s the role of this university library, which is certainly creditable, but not exactly Alexandria, or the Vatican, or even the medieval fortress of Heidelberg?

McHugh invoked another book, “How the Irish Saved Civilization,” about the Irish monks who did just that, preserving and copying religious writ and Greek and Roman teachings with equal diligence. “The more remote and impoverished the better,” he declared of those old monasteries. “Because then you weren’t going to get stomped into the mud by the Vikings, because you didn’t have any gold chalices, right?”

Thanks to their devotion during the long span of the Middle Ages, “they were saving the artifacts of Western civilization so that they could then flower again in the Renaissance.” Much earlier, McHugh asserts, “Alexander had a civilizing influence. It wasn’t just brutal battle after brutal battle. He did bring Greek culture and civilization eastward. One could argue about the purity of his contribution, but you can’t deny that there was one. So at this point, Kyle does see himself, and his mentor Roy did charge him with being a torch-bearer of culture, and keeping the flame alive.”

It’s a note of optimism, like the potential result of an equine romance between Buck and a little mare named Sweetheart. McHugh is mulling the distinct possibility of a sequel, but this is all he’ll say about it: “Which horse is the stand-in for Bucephalus? The new foal, or the old stallion?”

Paul McHugh, the author of “Came a Horseman: A Hard Ride in a Fierce World,” will be giving a Facebook live reading at Gallery Bookshop in Mendocino at noon on Thursday, January 21. He’ll read excerpts from his book for about ten minutes, then take questions from the audience for at least half an hour. You can call Gallery Bookshop and request copies with personalized inscriptions. The book is also available on Kindle.

One thought on ““Came A Horseman: A Hard Ride in a Fierce World” is a new novel set on the Mendocino Coast, about a fictional future that draws heavily on the ancient past”