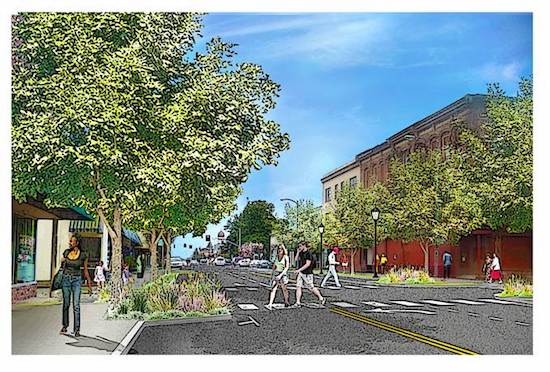 Streetscape rendering provided by the City of Ukiah.

LITTLE RIVER, 12/16/2020 — The City of Ukiah’s Community Development Department is currently working on their 2040 general plan, which will create guidelines for zoning and land use policy in the next two decades. Last Monday and Tuesday, the Development Department held two community meetings about the plan, where they consulted community members about land use and their priorities for Ukiahs future.

Between the two meetings, which took place over Zoom, around 60 community members attended. Many attendees at last week’s meeting were knowledgeable and passionate about issues plaguing the city. Participants voiced concerns over evacuation routes, green space, affordable housing, and food deserts, among other topics. Residents also expressed frustration over having their ideas ignored in the past. “Promises are made and promises are broken with impunity,” said one meeting attendee, Susan Sher. “Will this just be another feel good moment where we all put in our suggestions and they’re filed away and ignored?”

Craig Schlatter, the director of the Community Development Department, does not think that will be the case. He explained that in the last general plan, there were over 500 projects to be implemented, too many for Ukiah’s city government to handle. But he said this time will be different, that the Community Development Department can create a more feasible general plan built on community input that when completed, can help build a better relationship between the city government and residents. “We want to implement every program in the general plan,” he said in a phone interview.

The general plan has the potential to define Ukiah’s future, as it is supposed to serve as a guide for the Ukiah City Council in decisions related to zoning, housing development, infrastructure, and project prioritization, among other things. However, whether or not any of the ideas outlined in the plan are actually implemented will depend on how much funding is allocated from the general fund or collected from grants for specific projects, as well as the City Council’s will to push these projects forward, because the general plan is not binding in any way.

The State of California requires local municipalities to rewrite their general plans periodically, and as the last time the city published one was in 1995, so it’s due to complete a new one. The Community Development Department, which is responsible for developing and implementing the general plan, is hoping to complete the plan by 2022. The state, through the California Governor’s Office of Planning and Research, requires local governments to create these plans to outline their long-term objectives. The plans are supposed to align with state goals such as reducing homelessness and reaching carbon neutrality by 2045.

“We need a document that is realistic to be implemented by the City of Ukiah over the next 20 years,” said Schlatter. “That is the only way that the public participation process becomes valid. If the public participates and feels their opinions are heard and we actually implement those programs we have the beginnings of what can be trust moving forward.”

Schlatter led last week’s meetings along with Rick Rust, a representative from San Francisco based Mintier Harnish, a consultancy the city is paying $350,000 to write it’s general plan.

If you didn’t attend last week’s meeting, there are still ways to participate. You can go to Ukiah2040.com to get more information on how the plan is coming along and sign up for email updates. Also, in the participate tab, you can let decision makers know where you think there should be new single-family housing, where you like to shop, where there are traffic and roadway issues, and what areas would benefit from more pedestrian and bike paths.