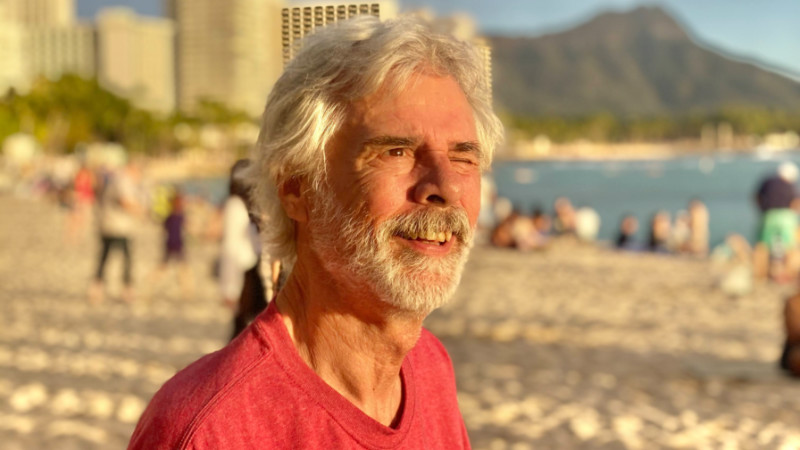 The following is a submitted obituary. The Mendocino Voice welcomes obituary submissions and publishes them free-of-charge for any North Coast resident or family. Contact us at [email protected].

We would like to celebrate and remember the life of Kenneth Lee Morgan, born May 9, 1949, in San Jose, California, to Barbara Jean Reese and Wilford Daniel Morgan. Ken passed away October 16, 2020, at Ukiah Valley Medical Center, surrounded by his loved ones.

Ken was the eldest in a large family of six siblings. He grew up living in various locations in California, including Redwood Valley and Sacramento. He graduated from Ukiah High School in June of 1967. He spoke fondly of his high school years; he remembered and often spoke of friendships formed there.

After graduation, his family moved to Sacramento, where Ken attended Sierra College in Rockland, California. He began his college education pursuing photo-journalism, but he later referred to his experience as time spent studying the art of Frisbee.

Following his father’s footsteps, Ken had a passion and love of photography. He left a collection of wonderful nature photos, especially photos of birds and flowers. He wrote freelance articles and took photos for The Sacramento Bee and the Ukiah Daily Journal.

During this time, Ken met and married Letitia Hyden (Letitia Warren), who became the mother of their five children. While raising his family, he lived in Ukiah and Willits, California, where he worked for Ukiah Unified School District as a custodian and then as a delivery driver.

Ken’s family fondly recalls shared times camping, hiking, and birdwatching. They enjoyed trips to the coast, to Lassen National Park, and even a trip driving through the states to Kansas. They remember songs, stories, and poetry he shared with them during these times.

Ken also coached Little League Baseball and was heavily involved in his children’s sporting events. He would be seen frequently on the sidelines of his kids’ basketball and baseball games.

Ken and Letitia’s marriage ended after 13 years of marriage. Later on in life, Ken began dating Rosanna Pina, with whom he shared his life thereafter, settling in Yorkville, California.

After retiring in June, 2010, Ken was able to pursue hobbies and passions he had not yet fully experienced. He took a few trips across the United States, where he visited numerous national and state parks and other unique locations. Some of his favorites were Death Valley, Jedediah Smith Redwoods, Denali, Badlands, the Tetons, and Yellowstone. Some unique places he enjoyed were Roswell, New Mexico; the New York Baseball Hall of Fame; and the Rock-n-Roll Hall of Fame in Memphis. He was able to attend three annual Morgan family reunions, held in Pricketts Fort, West Virginia, where he met many friends and Morgan relatives who shared a connected love of family history. He was thrilled to travel to Hawaii this past February with his daughter, Jessie, where he was able to take a helicopter tour and have his picture taken with a hula dancer; bucket-list items for him!

Retirement also allowed Ken time to study and read. He explored and shared so many nonfiction and fiction titles; he especially loved to read about history. Highlights of his retirement also included passenger flights onboard famous historical WWII planes, including “Betty Jane” and “Toulouse Nuts,” P-51 Mustang fighters, as well as  “Nine O Nines,” a B-17 bomber.

He was able to experience and loved being a grandpa to 13 grandchildren. Ken is survived and loved by Daniel Morgan (Kara Morgan), Heather Martin (Adam Martin), Jessie Morgan, Morgan Morgan (Sheila Morgan), and Brian Morgan (Chelsie Morgan). He is also survived by siblings Nancy, Patricia, and John. He was predeceased by siblings Robert and Susan, as well as his parents.

Ken will be remembered as a humorous, adventurous, intelligent, and wonderful father and grandpa. We will miss you and love you always.

The Mendocino Voice publishes obituaries, as well as wedding, engagement, and birth announcements, free-of-charge as a service to the community. Just send the article and photo to [email protected]; feel free to inquire for more formatting details or templates.