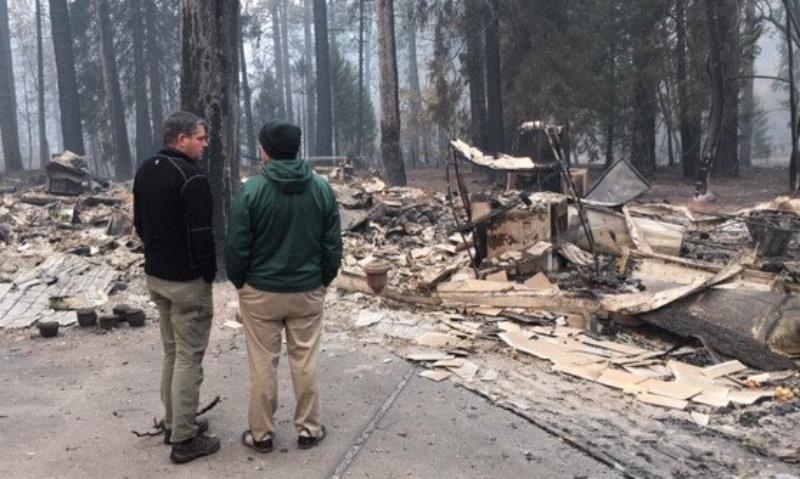 Assemblyman Jim Wood surveys the remains of a house burned down in the Camp Fire.

LITTLE RIVER, 12/14/2020 — The Mendocino Fire Safe Council has been around for almost two decades. Since their founding in 2004, they have worked to prepare county residents for the impacts of a changing climate and more frequent wildfires. “The Fire Safe Council does not seek to prevent all fires in wildland areas,” they write on their website. “Instead, it seeks to help persons in wildland areas to prepare for wildfires that are inevitable.” The council runs education, planning, and home hardening programs.

Their most recent effort is a video series, rolled out on an updated website, that guides residents through the steps of protecting their property from fire.

This year California made history, setting the record for most acres burned for as long as Cal Fire has been recording, which they began in 1905. According to the latest data from Cal Fire, there have been 9,639 fires so far  this year, burning 4,257,059 acres. Those blazes took 31 lives and damaged or destroyed 10,488 structures. Additionally, eight of the 10 largest wildfires in California’s modern history have burned in the past ten years. And this summer, the August Complex broke barriers by becoming the largest wildfire in the states recorded history.

Mendocino County has been hit with more than its fair share of burns, such as the August Complex, the Oak Fire, and the Redwood Complex, to name a few. Since 2017, over 600 structures have burned down in Mendocino County.

This pattern of increased fire risk is forecasted to continue, as climate change creates a hotter and drier California.

The Mendocino County Fire Safe Council was created with the intention of helping people deal with this honestly terrifying situation that the county is headed deeper into every year. “The values at stake are the lives of residents and firefighters, plus animals, homes, and natural resources,” the council writes on their site. “Through careful preparation, these losses can be prevented or reduced.”

The home hardening video series guides viewers through a series of steps they can take to protect their respective homes from wildfire. The videos, which were created in partnership with experts from the University of California Cooperative Extension, are organized in order of priority projects, starting with cleaning out roofs and gutters. This way, if free time is hard to come by, the homeowner knows where to begin in protecting their property.

“What we tried to do [with this series] was present the information in a user friendly way and in a way people on the go can ingest it,” said Scott Cratty, executive director of the Council during a phone call.

Here is a list of the video topics in order of importance, according to the Fire Safe Council.

There’s also an overview video, which explains that there are three elements of fire and only one that can be altered. The elements are oxygen, heat, and fuel. Fuel is the one element that humans can control.

This can be seen on a large scale and an individual one. On the larger scale, decades of forest mismanagement, essentially not allowing controlled burns, contributed to an excess of fuel and ultimately massive and uncontrollable fires like those that have plagued California in recent years. But properly managed forests, periodically cleared to remove brush fuels that ignite quickly, are less likely to result in a severe burn.

On the smaller scale, Cratty explained that homes often catch on fire from embers, which can drift over a mile with the help of strong winds. But one ember isn’t likely to start a fire if it hits a bare roof. For example, if you’ve ever experienced an ember fly out of a bonfire, fireplace, or woodstove, you probably felt a moment of panic, and then watched as it quickly went out. For embers to start a fire, they need something highly flammable, the way to start a fire in a fireplace you need paper and kindling.

So one important way to prevent fire is to remove highly flammable material that could serve as fuel.  According to the video series, some ways that people can control fuel are by removing flammable debris like dried leaves from their roofs, gutters, and vents, and clearing plants and brush from around their home to create at least five feet of defensible space.

“Home hardening is the focus that science based wildfire preparation has shifted to,” said Cratty. He noted that it’s a good time to watch the videos, because as the rainy season picks up, things will start growing. And when that vegetation dries, it could be as good as a fire starter in some situations. The videos advocate for a defensible space of five feet out and six inches vertically. “When embers are flying they sort of land and pile up in that area immediately around the home,” said Cratty. “Focus on that area to make it as free of flammable materials as possible.”

The series also encourages community outreach to encourage as many people as possible to protect their homes best they can from fire. “Your home is as vulnerable as the home next to you,” said Cratty.