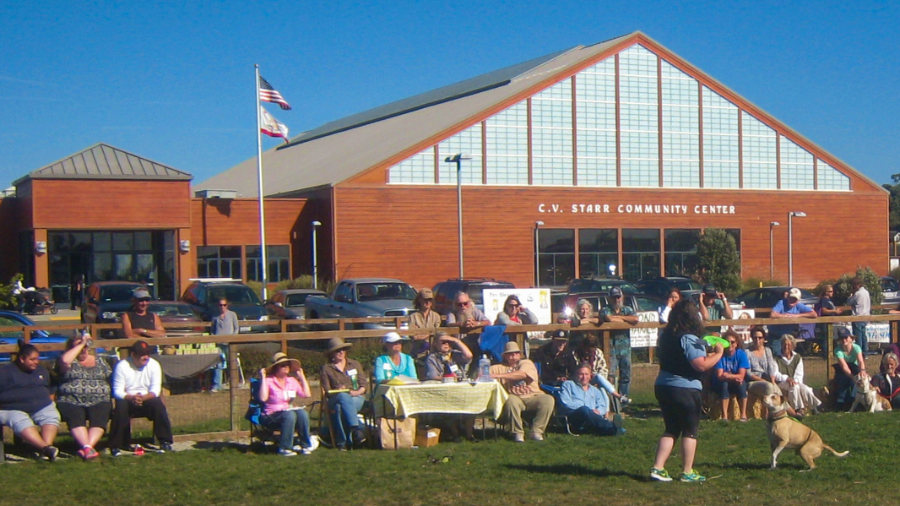 The C.V. Starr Center, in Fort Bragg, in pre-COVID timess. (Frank Hartzell / for The Mendocino Voice)

FORT BRAGG, 12/8/20 — The Fort Bragg City Council and a local church came together at Monday night’s special council meeting to forge a plan to try to open a winter shelter for the homeless.

“This is not a normal year. We are in a humanitarian crisis in our community this winter,” said Mayor William Lee. Lee said when the freezes and cold rains come, deaths from exposure could happen if the city doesn’t help get a shelter open.

The Mendocino Coast Hospitality Center (MCHC), a charitable nonprofit which provides year round services to the homeless, had planned to open a winter shelter on Dec. 1, but has been unable to find enough qualified employees to staff the facility. The Council’s Monday night Zoom audience heard good news on the winter shelter location. Rev. Randy Knutson, pastor of Trinity Lutheran Church, told the Council the church is ready to provide space for the winter shelter for January and the first two weeks of February.

But that still won’t happen without the staffing.

In light of this, the Council voted 4 to 0 (with one abstention)  to add $4 per hour to the pay of MCHC winter shelter staff, with the hope that higher pay will enable MCHC to hire the needed seven staff members. The church would put the shelter in a large dining and meeting room with a kitchen that is entirely separate from the sanctuary. In brief, if MCHC can hire overnight supervisors with the additional city funding, MCHC  will operate a shelter in the Lutheran church beginning in  January.

The council also authorized City Manager Tabatha Miller to negotiate a February and March winter shelter lease with MCHC for one of two city properties, either the C.V. Starr Community Center or the gymnasium in the back of Fort Bragg City Hall. As a third option, MCHC’s own headquarters at the northwest corner of North Franklin St. and Main St. will also be considered in the discussions between Miller and MCHC. The lease deal will not be final until the council has an opportunity to review all the options and vote at a future meeting. That will likely take place in January, unless a special meeting is called in later this month.

Vice Mayor Bernie Norvell was against using the MCHC’s downtown headquarters, also known as the Old Coast Hotel, for the winter shelter.

“For me it would be a hard sell to do one more thing to that neighborhood that we promised it would not do,” Norvell said, after the idea of exploring the location was brought up by Councilperson Jessica Morsell-Haye. The 2015 purchase of the Old Coast Hotel by MCHC, using city-obtained grant funds, led to a bitter division of the town, including an unsuccessful ballot measure to block non-profits in the downtown area in 2016.

“This is a crisis situation. I understand the vice-mayor’s concerns. But we need to consider all the options that might be available to us,” said Mayor Lee. Lee also asked the public to come forward with any suggestions for a location.

Councilmembers seemed to favor the C.V. Starr location Monday night but said they would like to have the gym in city hall as a backup. Exhaustive searches for a location had been done by the city and MCHC, without result until Trinity Lutheran stepped forward. Due to distancing requirements mandated during the pandemic, other houses of worship and some other locations were not large enough for the winter shelter. Additionally, other owners expressed concern about pandemic liabilities, or the inability to move back into their own facilities if the COVID-19 crisis lessens.

Councilmember Lindy Peters recused himself from the discussion because he lives within 500 feet of C.V. Starr Community Center. Lee is in his final month on the council, having announced his resignation effective Jan. 1.

Paul Davis, interim executive director of the MCHC, attended the Zoom meeting and answered questions from the Council and public. This drew him praise from Vice Mayor Novell, who said getting such cooperation and good answers in the past from MCHC has not always been possible.

The winter shelter houses overflow from the MCHC’s Hospitality House at 237 N. McPherson Street. The winter shelter also intentionally provides a “lower bar” to entrance than does the Hospitality House to protect as many people as possible from frigid winter conditions. One thing this means is that people who are “slightly inebriated” can be admitted, if they otherwise behave, the Council heard from Davis.

Davis said the rules for the winter shelter will be much tougher this year due to COVID-19. He said if someone were to leave the winter shelter during the night this year, they would likely be banned from coming back for the remainder of the year, because of the current safety concerns. The winter shelter has always required people to stay on the premises, providing two staff to make sure such rules are followed. The guests are never allowed to congregate outside. Guests must go to the Hospitality Center headquarters to register and be qualified for the winter shelter. Then they are driven to the winter shelter location at 5 p.m and driven back to the hospitality center by 8 a.m., with two supervisors being present at all times during the evening and overnight.

Regrettably, local law enforcement will likely not be able to drop people off at the winter shelter this year, Davis said. In the past, people newly released from jail or simply found cold and vulnerable downtown have been brought to the shelter by law enforcement agencies.

“I don’t see how we can make that work, how we can try to squeeze another cot into a place that has been socially distanced,” Davis said.

“It is a tough demographic. I have seen people try to bring alcohol in. I have seen a fight. These are people who don’t quality for the Hospitality House because they don’t want to follow the rules,“ Norvell said

While only 17 people can now shelter at Hospitality House due to COVID-19, the MCHC provides outside meals, showers and laundry facilities for anyone else who needs them at no charge. The MCHC also provides housing navigation, vocational and wellness programs at the Hospitality Center on Franklin Street, in addition to access to mail delivery for those with no address, plus access to a phone and computer.

The majority of those who provided public comment urged the council to act and open a winter shelter as soon as possible.

Linda Jo Stern, who works with Fort Bragg Street Medicine, told the council the winter shelter was badly needed for the health and safety of those living on the street. Anna Marie Stenberg, who lives on Wall Street behind the C.V. Starr Center said she was 110 percent behind using the location in her backyard.

“We need to do something and do it now. These are our people. It’s always ‘not in my backyard.’” Stenberg said.

City Manager Miller said having the proposed lease come back to the council for a future evaluation and vote would also give more people the chance to provide input, considering the relatively short notice the special meeting provided. She said it would also give the city time to fully hear the concerns and ideas of C.V. Starr staff.