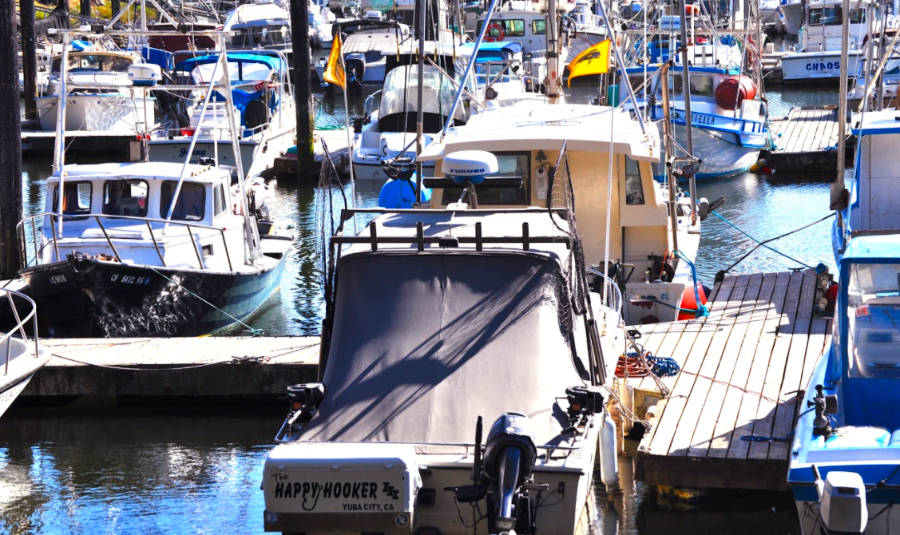 Boats at the Noyo Harbor. (Frank Hartzell / The Mendocino Voice)

FORT BRAGG, 12/17/20 — 2020 has been one of the busiest, if not the very best, Dungeness crab fishing year for Tim Gillespie and his recreational party fishing boat out of Noyo Harbor, the Sea Hawk.

Recreational crab fishing season opened Nov. 7 and is scheduled to stay open through July 30 north of the Sonoma County line. Commercial crab fishers have not been allowed to start their season. The commercial season opener has been delayed for more than a month, with Dec. 23 now the opening date, due to fears about whale entanglements in crab gear and the size of sample catches. A CDFW press release says the risks posed to whales from the lines used to tie crab pots to surface floats is abating as more gray whales move south.

Gillespie said that to his knowledge there has never been a whale entanglement in gear put down by a recreational crab fishing boat out of Noyo Harbor. He has only seen one whale entanglement in his decades working off the Coast, which was a killer whale which became entangled in commercial crab fishing gear about 7 years ago up near the outflow of Ten Mile River. The orca died. There has been one crab line-caused whale entanglement in 2020, a humpback whale that later swam free in Monterey Bay, said Ryan Bartling, environmental scientist for the Department of Fish and Wildlife.

At the start of the season, the Sea Hawk puts out the maximum number of pots allowed to Gillespie by the California Department of Fish and Wildlife, 60 pots, and takes people out daily to pull the pots up. Fewer anglers than in past years can take the 7-hour fishing trip, due to concerns about COVID-19. Now only 14 people can fit on the Sea Hawk instead of 23, so the boat has been taking more daily trips this year to get the same number of poles in the water.

Gillespie said it’s taken a bit longer to get a limit of crab this year than in past years but limits are being brought in 87 percent of the time. The limit per person is 10 crabs. The way the fishing works on the Sea Hawk (and other party boats out of Noyo Harbor) is the party boat fishers pull up Gillespie’s crab pots for a few hours, then go fishing the rest of the day. The pots get rebaited and go back in the water.

This year they have to pull up more pots and spend more time pulling pots for party-fishers to get their limit. He said sometimes people pull enough pots to get 5 crabs and then elect to go pole fishing the rest of the day.

Gillespie, known as “Captain Tim” lets the people fishing decide how many hours they want to spend on pulling up crab pots and how many hours spent pole fishing. The fish being caught currently on poles are rock cod and lingcod, with limits on the rockfish most every trip and the ling cod fishing being “so so” Gillespie said. The Sea Hawk was able to go out almost every day in November but harsh seas in December have cancelled fishing some days, including today, Thursday, Dec. 17. There has been a lot of pole fishing along the shore this year, with people, including youngsters, pulling up crabs while fishing off the jetty under the Noyo River Bridge in Fort Bragg.

The California Department of Fish and Wildlife announced this week that the commercial Dungeness crab season will open Dec. 23, to give crabbers some ability to partake in selling crab for holiday feasts. The November 15 opener was delayed in the central California zone, from the Sonoma-Mendocino county line south, because of the possibility of migrating whales becoming entangled in those ropes that attach crab traps to floating buoys on the surface. The opener was delayed in the Northern California zone including Humboldt, Mendocino and Del Norte counties, because the sample catch was too small and quality issues could not be determined, Bartling said. That issue is now resolved.

Commercial crab seasons have been canceled or curtailed over the past 5 years due to concerns about a toxin sometimes found in crab, domoic acid, and over concerns about whale entanglements. This year the only concern is the whale issue. DFW scientist Bartling said domoic acid testing is complete for the year in California and there has not been a problem. Bartling said the lack of problems with dominic acid this year is hard to pin down but may have something to do with colder water temperatures this year, after years of a “marine heat wave.” Bartling said there have been issues related to domoic acid in the states to the north of California this year.

Commercial crabbers put out between 175 and 500 pots. Recent survey data indicate most whales have now migrated past the California fishing grounds on their way to winter breeding off Baja California. Based on these data, CDFW made a preliminary recommendation to open the fishery statewide on Wednesday, Dec. 16, a DFW press release stated.

The Whale Entanglement Working Group evaluated all available data and did not provide a consensus recommendation to open or delay. After the Working Group meeting, the majority of ports requested further delay of the opener. “Our recommendation was to open December 16,” said CDFW Director Charlton H. Bonham.

“But after hearing from parts of the fleet expressing a variety of views, and review of additional scientific information provided by Working Group experts, we decided on an additional seven-day delay. This gives the fleet extra time to get ready and get their gear in the water, certainty in that we’re opening statewide, hopefully the chance to get part of the holiday market and an additional seven days for any remaining whales to migrate,” Bonham said in the press release.

“Available data indicates some whales remain in the fishing grounds but risk is declining and CDFW supports a balanced approach to managing risk and providing opportunity for the commercial fishery that is grounded in expert science,” the press release said.

Since late October, CDFW in partnership with researchers, federal agencies and the fishing industry has conducted surveys from the Oregon state line to the Channel Islands to observe marine life concentrations. Based on recent aerial surveys and observation data, gray whales have begun to migrate out of California waters, which in turn reduces the risk of entanglement when the commercial fishery opens, the press release stated. Gray whales migrate north to feeding grounds off Alaska with the most seen in March. Then they migrate south to breed and birth, with the highest numbers seen in December. Some gray whales can be seen migrating at different times of the year.

Through the course of the crab season, CDFW will engage regularly with the Working Group to review scientific information and advice efforts to minimize the risk of whale and sea turtle entanglements while maximizing fishing opportunity, the press release stated. Based on that process, CDFW may take additional management actions in response to future risk assessments. For more information related to the risk assessment process or this delay, please visit CDFW’s Whale Safe Fisheries page, the press release stated.

Domoic acid is a kainic acid-type neurotoxin that causes amnesic shellfish poisoning. It is produced by algae and accumulates in shellfish, sardines, and anchovies. When sea lions, otters, cetaceans, humans, and other predators eat contaminated animals, poisoning may result.