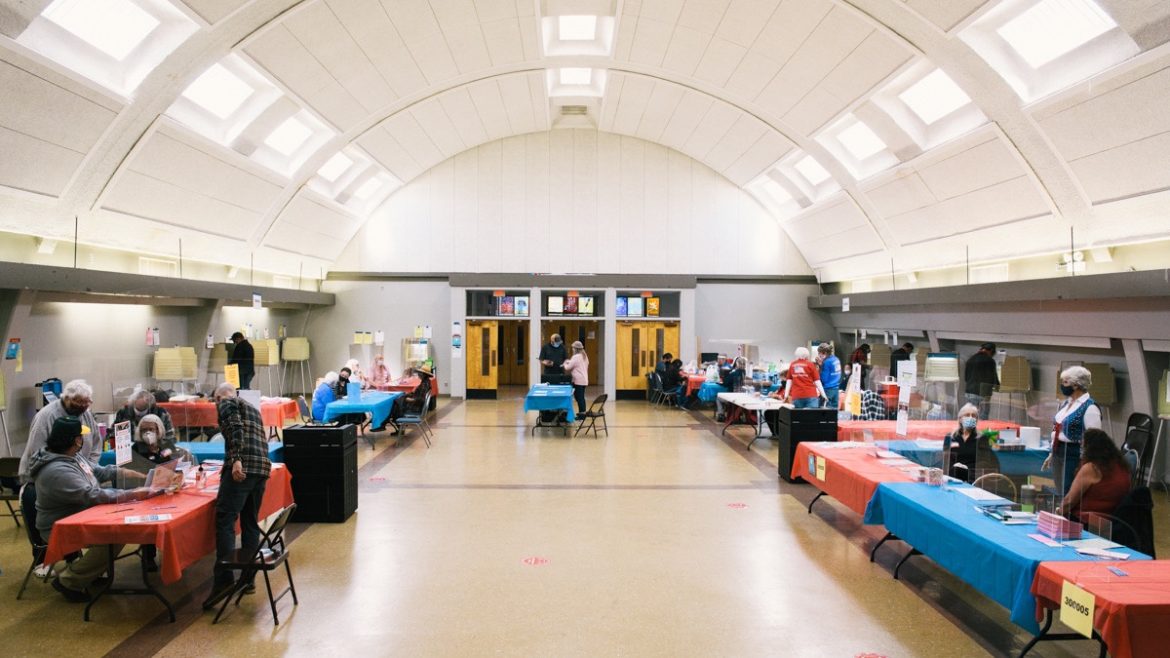 A view of a polling place at the Willits community center on November 3, 2020. According to election inspector Jan Meier, voting has been pretty steady, "not heavy but steady," with at most a short wait for voters. Election officials remind voters that if they forget their mail-in ballot, they will need to fill out a provisional ballot at the polling place, or return home to pick up their mail-in ballot. (Alexandra Hootnick for The Mendocino Voice)

UKIAH, 11/3/20 — The initial count is in for Mendocino County, and as of about 8:20 p.m. tonight the votes of 47.02% had already been counted. This count is only from dropped off and mailed-in ballots, and so far does not include any of the ballots cast today as same-day ballots. Those ballots are just now being collected and are starting to be delivered to the elections office on Low Gap Road in Ukiah. (See full results at the Mendocino County elections page)

However, even at this early stage of the game some things are becoming clear. Glenn McGourty in the First District and Maureen Mulheren in the Second District both have commanding leads, and it will be difficult indeed for their opponents to make up the difference.

As leading by a wide margin, the two measures in Willits: K & I. Given the margin it seems very likely they are destined to pass.

In Ukiah the city council race is much tighter with Douglas Crane in the lead, followed by Stephen Scalmanini, Josefina Dueñas, then Jenny Kimbler. This race is however too close too call the the top four trail each other by only one percentage point each. The top two vote getters will take the seats.

Nationally the presidential race is waiting on the outcome in certain swing states, but here in Mendocino County Joseph Biden has routed President Trump, with 73% of local votes against Trump’s 25%.

Below are the initial results for Mendocino County elections, and beneath that certain key federal and state elections including.

Two seats are up for grabs in this race and the candidates with the top two vote counts take the seats.

Measure K, City of Willits
Enacts a 3/4 cent sales tax to “prevent the elimination of police services; street and sports field maintenance; closing of city facilities; and loss of other essential city services.” Passes with 55% of the vote.

Measure I, Willits School District
This measure was voted on by all people in the school district which is far larger than the city. It’s a $17 million bond measure with an according hike in property tax. Passes by simple majority

Willits City Council
Willits could not drum up enough interest in the race and only the incumbents declared to run. In this race the conclusion is foregone, all three will win, the only question is in what percentage.

Note: Our journalists are working hard to keep you up to date on election news that’s specific to Mendocino County. You won’t find us sharing speculation — only information we’ve carefully fact-checked. Please send news tips and feedback to [email protected].

We will only share results when they are deemed official by the Mendocino County elections office. For statewide and national results, we rely on the Associated Press, which has been counting election results since 1848. Learn more here. https://www.ap.org/en-us/topics/politics/elections/counting-the-vote

We know there’s a lot of partisan information out there, and finding credible information about the election (especially the national races) can be difficult. Our goal is to earn your trust by consistently sharing fair, independent coverage of our local community.