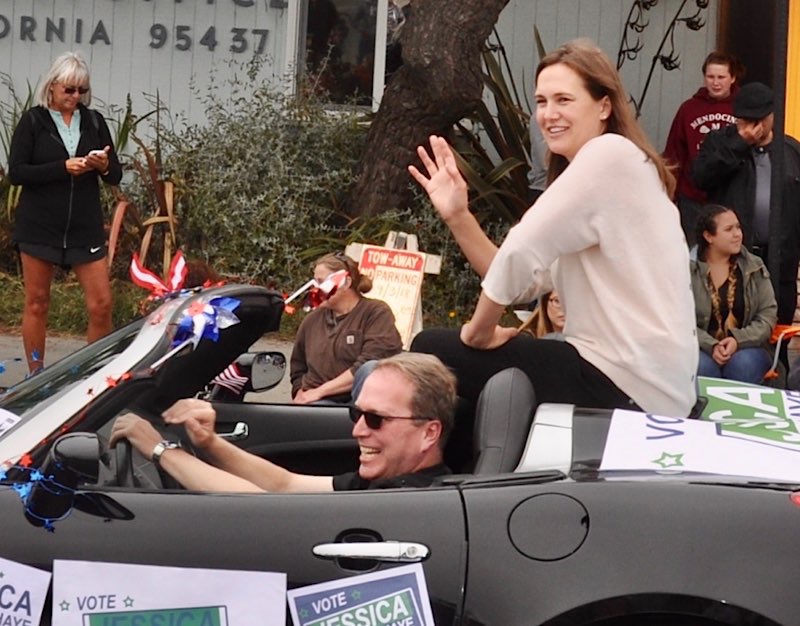 FORT BRAGG, 10/26/20 — Fort Bragg Mayor Will Lee announced his resignation from the City Council this afternoon, in a press release issued just before the Monday council meeting. Because no election will be held this year for the Fort Bragg City Council, due to lack of interest, this may leave the council with a vacancy.

Lee’s departure will be effective December 31. He is leaving to take a job in another community, the press release states. Lee works for Adventist Health, which runs the local hospital. He is a long-time employee of the hospital. Lee is pictured above driving in the 2018 Paul Bunyan Days Parade. Lee is Fort Bragg’s first openly gay mayor.

In announcing his resignation effective Dec. 31 Monday night, Mayor Will Lee praised his colleagues and city residents while also saying personal criticism from a small number of people “hurt” especially when directed at city staff.

After a brief opening announcement, Lee waited until near the end of Monday’s City Council meeting to discuss his move, not wanting the meeting to become a “Willfest”. Lee said he was proud of all the decisions he had made in the past four years and was having a hard time with goodbyes.

“As most of you know I’m an emotional person and I can’t help that. It’s been a very difficult week for us here at the hospital and having to announce to the people of Fort Bragg who have been so good to me,” Lee said.

“Our political culture is so toxic. I just want to ask people to be kind to each other and be considerate of those serving in public service. We withstand a lot of attacks on social media. It seems worse than when I got elected in 2016 and I just think that is a national discourse that is troublesome.”

He said a young person wanting to get into public service might have second thoughts about it due to attacks perpetrated by a small handful of people.

“That’s been the hardest thing for me is to watch our staff be attacked while they are on the clock. I guess we get that because we are elected…We have to stick together in this community,” said Lee.

“I think this is one of the best councils we have had here in many years. In all the hundreds of hours I have worked with these four colleagues I want to say I am so impressed.”

Other council members and staff heaped praise on Lee at the meeting.

“I have to commend you for all the hours you have put in and all the hard work,” said City Manager Tabatha Miller. “As a boss I have to say you are extraordinary. You really have stood behind us. You are innovative and ambitious and it really has made a difference.”

“You have been a great mentor. You will hear more from me before you leave,” said Councilmember Tess Albin-Smith

“One thing that can’t be missed is you make things fun. Will, thanks for making things fun, I think that is a character plus that a lot of elected officials don’t have,” said Councilperson Lindy Peters.

“I’d like to second that you make things fun. I ran for city council because of you, it’s your fault.. Being in local government with Will how bad can it be? Thank you for all you have done.I too will wax on as the time gets closer,” said Councilperson Jessica Morsell-Haye.

In another matter, city clerk June Lemos announced that 3501 ballots have been dropped in the box in front of City Hall and sent to Mendocino County election headquarters. The total voter registration in the city of Fort Bragg is 3938, which is up by 464 persons since the last election, she said.

“We have had almost as many ballots come in as registered voters. But of course, the ballots are coming from all over,” Lemos said. She said ballots had been dropped off from as far away as San Diego.