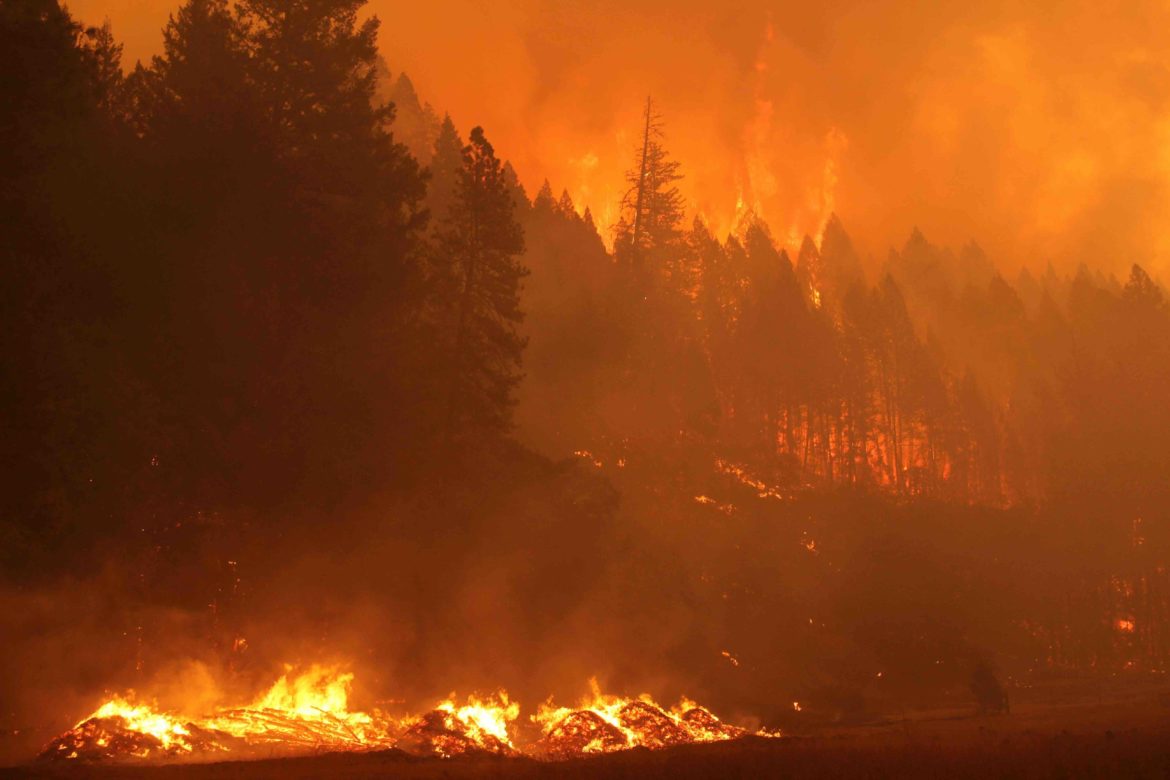 MENDOCINO Co., 10/16/20 — The carbon dioxide that the August Complex is releasing may contribute to warming the planet for years into the future. But exactly how much impact that the wildfire may have on climate warming is still unknown.

The one million acre August Complex is not only emitting smoke, heat, and flames into the Northern California sky, it is releasing carbon dioxide into the atmosphere. As trees and other plant material go up in flames, they release all the carbon they have captured over the years.

Usually, forests are carbon sinks — they absorb more carbon than they release. When plants photosynthesize, they pull C02 out of the atmosphere and convert it into sugars that help them grow. That’s why planting trees is often advertised as a method of tackling climate change, society relies on them to offset carbon emissions through their natural processes.

But when forests burn, they become carbon sources — they release more carbon dioxide than they absorb, contributing emissions just like factories and cars, which contributes to warming the planet. In California’s 2020 fire season, this switch from being a carbon sink to a source or carbon emissions, has taken place on more than four million acres that have been burned by wildfire.

The August Complex, the largest fire in California’s recorded history, accounts for one million of those acres. Many of the other large fires that are burning this season, such as the Zogg and Glass fires, are also in Northern California. Due to climate change, the entire state of California is getting hotter and drier. Over the last century, Northern California warmed between 1.5 and 2 degrees fahrenheit, according to the EPA. Subsequently, the region is experiencing more frequent, expansive, and hotter fires.

How are carbon emissions calculated?

Calculating exactly how much carbon dioxide the August Complex fire is releasing, and therefore how it is impacting climate change, is complicated. In addition to greenhouse gases, the fire emits smoke and other aerosols into the atmosphere that block the sun and can actually cause a cooling effect. Factors like this make it unclear whether or not the August Complex, and wildland fires in general, are contributing to a positive feedback loop — where climate change is causing more fires, and fires are worsening climate change.

“There can be huge variations acre to acre,” Collins said. “Areas can burn very differently.”

One major factor to consider is what type of vegetation the fire is burning. Different types of vegetation hold different amounts of carbon, and therefore give off different amounts when they are burned. For example, trees hold much more carbon than grasses, so if large trees go down in a fire, the carbon footprint will be much higher than if only grasses and undergrowth burn.

Every year, the California Air Resources Board, a state agency tasked with protecting California residents from air pollution and creating programs to stymie climate change, calculates the amount of acres burned in the state and the resulting carbon dioxide emissions.

They have yet to estimate this information for 2020, but the historical data tells an interesting story about fuel type and carbon emissions.

So why are the emissions so different?

Scientist James Randerson, who studies fire and climate-carbon cycle feedback at UC Irvine, said the difference probably has to do with the type of matter that burned, and that the 2017 fires likely burned more chaparral, while the 2008 fires took out larger vegetative matter that held more carbon.

In 2008, many of the largest fires that burned were in Northern and Central California, such as in Siskiyou, Trinity, and Monterey counties.

In 2017, many of the large fires were in Southern California. The Thomas fire burned almost 300,000 acres in Ventura and Santa Barbara counties.

Mendocino National Forest, where the August Complex began, is made up of a combination of coniferous and hardwood trees as well as chaparral grasses. According to the Forest Supervisor, Ann Carlson, a variety of material has burned. At some points and in some areas, the fire has burned very hot and spread quickly, taking out most everything in its path. But at other moments, when the wind lulled and the fire cooled, only undergrowth burned, and large trees survived, Carlson explained in an email.

When looking into the carbon footprint of forest fires, another factor to consider is the two stages of carbon release. First, there is direct release from the wildfire — how much carbon is in the smoke that has enveloped the county and spread across the country for months. Then, there is extended release — how much carbon will be released from trees that weren’t burned, but were killed, and will decay over decades. As forest materials rot and decay, they will release carbon into the atmosphere.

Additionally, it’s important to consider forest recovery. When forests grow back after a burn, they sequester carbon dioxide as they grow. Although Mendocino National Forest is currently releasing carbon as it continues to burn and smolder, it will start to absorb carbon as soon as it starts growing back.

Just to be clear, this is an oversimplification of an extremely complex issue. The amount of carbon released could vary based on many other factors such as whether or not they burned in wild urban interfaces, how quickly they were put out, how long they burned, and much more.

The most precise carbon accounting won’t come until next summer, UC Berkeley’s Dr. Collins explained, when scientists can use satellite imagery to compare the amount of green area before the complex took hold in Mendocino National Forest in mid-August to the same time the year after the burn.

As more trees that typically hold a large amount of carbon are burned, there will be less trees left to serve as carbon sinks. Randerson also added that as the rainy season condenses, the fire season lengthens, and hotter and drier weather continues to appear in Northern California, it may become more difficult for those trees to grow back. “It’s like a valley of death that we pass through each summer and the valley keeps getting deeper.”

Randerson said this is one more argument for using prescribed burning to reduce very hot fires. However, he noted that it’s important not to lose sight of the bigger picture. “It’s really important we take those steps with forest management, but there is only so much we can do. Gas based cars and utilities are the dominant driver of our carbon emissions, which is making our fires worse,” he said. “We have to commit to replacing energy with renewables, elevating the importance of solar, battery systems, increasing our renewable portfolio and strengthening environmental laws.”

One thought on “As forests burn, carbon sinks turn into carbon sources”