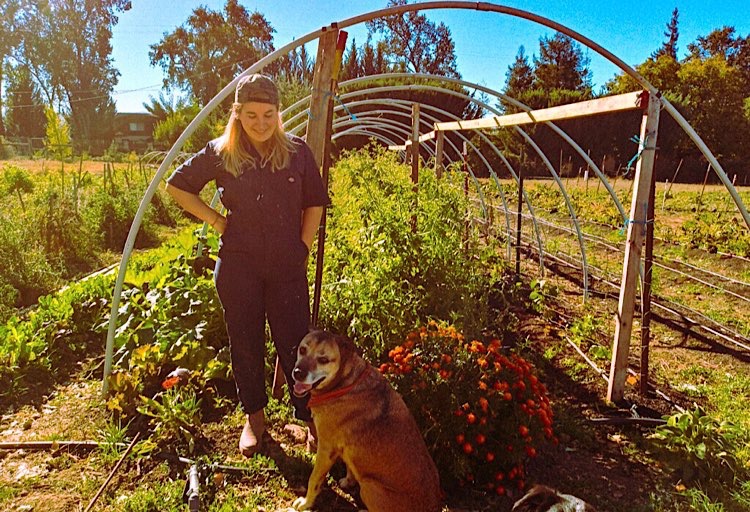 Hannah Best stands next to Otis on Soul Shaker Acres, the author's farm.

Editor’s note: We welcome the return of our Ben Wolf (Pig Ben) and his angry farmer column. The following is an opinion column and the views of the author do not necessarily reflect those of The Mendocino Voice. If you’d like to send us a letter-to-the-editor write [email protected].

Author’s note: Please share this article and show your commitment to supporting any supervisor candidate who’ll invest in local farmers. Undecided voters could swing both races, make them give us something worth voting for.

POTTER VALLEY, 10/27/20 — Mendocino has its fair share of free-thinkers, so much so that it’s damn near impossible to think of something we could all agree on. But one thing does bring us together, it’s the fact that we have more faith in ourselves, and our small farm community, than in any ass-hat government official who claims to represent us.

Every politician running to serve rural people speaks of the importance of small farmers — and if our candidates really want to put their money where their mouth is, here’s the opportunity of a lifetime. A few years ago, our out of touch Board of Supes gave themselves a five-figure raise, something I can’t imagine a single constituent thought was the best use of our cash-strapped county’s money. In response to this, some of the next crop of supervisors swore off the raise, setting a precedent of supervisor candidates promising to take the original, more reasonable, salary, and donate the rest to a greater good.

If the current candidates in the 1st and 2nd Districts earmarked this money towards making local ag products more accessible for those in need in our community, Mendocino could become the premier model of how to revitalize local farms by getting healthy local food to those who need it most. The Food Stamp (EBT) Market Match Program provides the perfect template for how to do this.

The Market Match Program empowers folks who receive these federal subsidies by matching these funds, thereby doubling their purchasing power, when they buy local goods. While small farmers have been diminished to well under one percent of the total population nationwide, this program keeps money already coming into our county circulating locally more and more. This creates more business for the farms themselves, as well as all the businesses they rely on and support.

A couple pilot programs at local grocers have gone further by meeting these folks where they are, allowing them to use their EBT funds in their neighborhood stores to get the same discount on Mendocino-produced goods. If the supes candidates put their raise  to these sorts of programs, they would not only empower our community members in need, it would prepare us for future emergencies, whether they be fires or pandemics, like nothing else could.

When the 1st District candidates Glenn McGourty and Jon Kennedy debated a couple weeks ago, they both said they were open to the idea of forgoing the aforementioned raise, referencing local 4H chapters and firefighting efforts. These are both worthy causes, no doubt. But, neither idea would make Mendocino a national leader we all know it has been in the past. Remember when medical marijuana seemed like a Mendo hippie-dream instead of another overly-commodified industry? Twenty-five years can change a lot if we get behind something we can all believe in.

Pre-pandemic, about one in five households in Mendocino were eligible for federal food subsidies (EBT). With 2020 being what it has been, that number has surely risen even higher. When folks spend this money at bigger retailers, they are sending that money out of our community to corporate food giants that produce the crap that lines almost every grocery store aisle in the county.

This is true whether you buy processed or whole foods, organic or chemically produced. Organic and other food trends have been co-opted as marketing gimmicks by food giants like M&M Mars (owners of Seeds of Change and KIND Snacks) and Hain Celestial (owners of Garden of Eatin’, Rudi’s Organic Bakery, Spectrum Organics, etc.). Every grocery chain now has sections with “organic” and “healthy choices”-veneer, but local products have benefits to our whole community that these half-baked attempts don’t come close to replicating. If we have a thriving farm scene, we have food security and a cohesive community. Right now, we just have over-priced commodified goods coming on the same trucks from the same distances as all the processed food we know we should find true alternatives for.

This is why Safeway seems like such a fraud for calling anything from California “local”. Similarly, when the Ukiah Co-op management hung a bunch of posters of local farmers above their produce aisle, enough shoppers complained that there were more posters than actual local produce options until they took most of them down. The security of knowing where your food comes from and how it was produced means a million times more when you actually develop a relationship with your farmer, rather than having “local” used as a largely empty marketing strategy.

Farming in a community without an affluent or centralized population has been an uphill battle since I moved here in 2011 in hopes of finding the small farm haven I’d heard Mendocino was. I only know a handful of farmers who have been doing the local farmers markets as long as I have been here, which is disheartening as all hell. These markets are the place small producers can keep almost all of the retail sales price their products demand. This gives those who can’t afford wholesale production a shot at slowly growing in size and experience. Even the farmers that have shown amazing potential and skills, like Lovin’ Mama Farms a half a decade ago, or Tequio Community Farm, which left Mendocino just last year, almost always fall victim to the daunting pressures that face any up-and-comer farmers in Mendocino who don’t have the luxury of owning their own land.

In comparison, I have known more friends and neighbors who have died from “deaths of despair” (overdose, suicide, etc.) that have struck rural communities nationwide, than I have known local farmers who can afford to pay themselves minium wage. This can’t stand if Mendocino wants to continue thinking of itself as a small farm community rather than another rural community in decline. Thankfully, we’re a hardy and ingenious bunch of country folks. All we need is a little quality leadership and we could start an agricultural movement that doesn’t leave anyone behind.

When the Food Stamp (EBT) Market Match Program started at the Ukiah Farmers Market about a dozen years ago, it began on a damn near exponential trajectory of growth for half a decade before plateauing to what its at today, resulting in tens of thousands of dollars of sales per year going directly to farmers and back into our community to have its influence magnified again and again. If the 2nd District supes candidates put the funds that went towards their raise back into the Ukiah Match Program, the market manager could easily make the incentive even greater for those using EBT at the market. If we show we can use these sorts of funds to really reverse the decline of small farmers, talks with State Senator McGuire’s office have given me hope that the state could potentially provide even more funding if we show we could use it constructively.

While the 1st District may not be home to big enough Farmers Markets to use the same amount of funding as Ukiah, look no further than Potter Valley to find even more innovative ways to reproduce this sort of farm community rebuilding. The 1st District Primary Debate was hosted at Hoppers Corner Saloon. Two doors over, at Hoppers Corner Store, I have helped the owner initiate one of the two Food Stamp (EBT) Match Programs at a retail grocer in the county.

This program, funded by a few community pig roasts over the last few years, has meant that those in Potter with EBT can use their card to get half off local goods (everything from olive oil, honey, pork, beef, veggies, melons, and some baked goods over the years, depending on what’s in season) without having to make it to a certain farmers market during a certain few hours a week.

This could easily be replicated at stores in Redwood Valley, Calpella, or Talmage if our local Supes made it a priority. Maybe Supervisors Haschak and Williams would follow suit to make local food affordable from Albion to Covelo and everywhere in between.

Meeting people where they are at and giving everyone the chance to support local farmers is the most sure-fire way we can rebuild the fabric that has made Mendocino the quirky collection of small farmers and eccentrics we’ve all come to love. Thank you for your support, if we focused on these local issues as much as people focus on national politics, we’d have a thriving small farm community in no time.