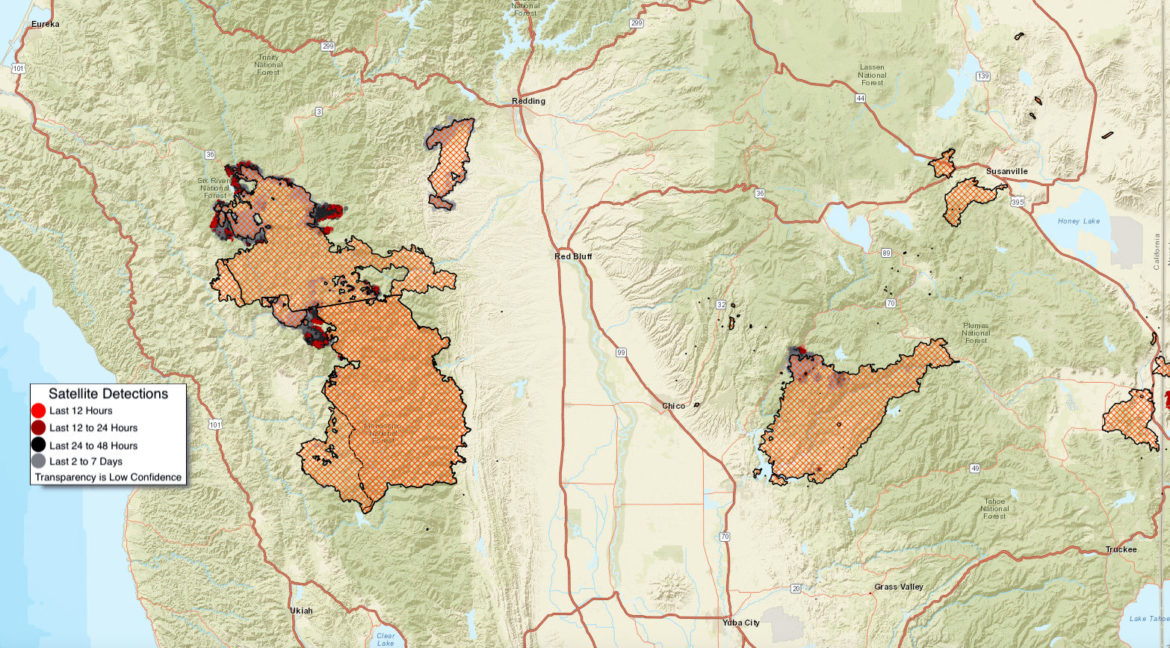 LITTLE RIVER, 10/5/2020 — At over one million acres, the August Complex is now the first “gigafire” in California’s modern history, and the largest in recorded California history at roughly the size of Sonoma County. Mendocino residents are familiar with this progression of enormous fires — the August Complex took the mantle of largest fire in modern history only a few weeks ago from the 2018 Ranch fire (part of the Mendocino Complex) which burned only 410,203 acres. Between the two fires almost all of the Mendocino National Forest has burned in the last two years, as well as much of the Trinity National Forest.

And as the August Complex has broken this harrowing record, California as a whole has broken our record for total acres burned in a season (in the modern era): hitting “well over 4 million,” according to Cal Fire. This is more than double our previous record, of around 1.8 million acres, set in 2018. However, it should be noted that experts believe that prior to the white settlement of California, far more than this burned every year as part of both a natural fire cycle and the Indigenous people’s land management practices.

Beyond California this fire now ranks as among the largest in the modern history of the United States. The Great Fire of 1910, or “Big Blow Up,” which burned through Idaho and Montana incinerated some 3 million acres. The response to that fire is credited with instituting the modern regime of fire suppression and the famous “Ten acres of 10 a.m.” motto of the Forest Service. The 2004 Taylor Complex in Alaska burned 1,305,592 acres. In 1871 the Great Michigan burned 2,500,000 acres while at the same time the Peshtigo fire of 1871 burned about 1,200,000 acres in Wisconsin. But the August Complex now ranks as perhaps in the five largest fires in the United States since records started being kept.

The fire is 54% contained, according to Cal Fire’s incident page, and therefore, will likely continue to grow somewhat. However, the “West Zone,” the area of the fire that has burned into or towards Mendocino, Humboldt, and southeastern Trinity counties, and is managed by Cal Fire, is 60% contained.

For the past couple weeks, the fire growth in the southern area (distinct from the “South Zone”) has largely been either fill-in, growth in the interior or between the fire and established strong containment lines. The northern area of the West Zone and the North Zone proper have continued to see vigorous fire activity.

Yesterday, fire activity increased on the east side of the North Zone due to high temperatures, low humidity, and surface winds. The fire weather caused spot fires to pop up the east of Forest Road 35, near Round Mountain and the meeting point of Shasta, Tehama, and Trinity Counties. There was some worry last week that the Zogg Fire, burning in Shasta County, might connect with the August. That fire made a run and came within nine miles of the August, but appears to have mostly stopped its growth.

Resources and personnel have been re-allocated from the South Zone, where the fire is largely contained, to the North Zone near Ruth Lake.

Some reprieve may be on its way. Rain is forecasted for Friday and Saturday. How much precipitation will fall remains to be seen.

LITTLE RIVER, 10/3/2020 — The August Complex has been burning for nearly 50 days now, and is just shy of being the first fire in modern California history to hit one million acres, at truly enormous size approaching the area of Sonoma County. And while firefighters continue to making good progress, laying down hundreds of linear miles of containment lines, even after so many weeks the fire is still a ferocious foe.

Today new evacuation orders were issued for an area northeast of Covelo, specifically: “Zone N: North of the Middle Fork of the Eel River including the Eel River Ranger Station and Black Butte Store, west and south of the National Forest Boundary, East of Williams Creek.”

The area is clearly visible in the map below, and a larger version of the map can be seen at this link.

Yesterday, Friday, the fire made an extreme run northeast of Covelo in the are of “Castle Peak” and “Red Rock,” crossing lines and forcing these new evacuations.

However, with the bad news in the north, where the fire remains very active, comes good news in the south where the fire has largely settled down, and the Lake County Sheriff along with firefighters reduced evacuation orders to warnings in the Lake Pillsbury area. (See the details in this map)

Here is the Nixle order that went out yesterday from the LCSD:

Six weeks in, the August Complex and the resulting hazy, discolored skies may seem like a permanent fixture of life, a new normal. Ash continues to rain down in inland Mendocino and heavy smoke from the complex has often reduced air quality to unhealthy in Covelo, Willits and Ukiah and other parts of Mendocino County.

The same thing is happening across the state, where more than 8,200 incidents have burned nearly four million acres this fire season, and almost 17,000 firefighters are working to contain 23 major events across California. The massive fire season has forced 53,000 residents to evacuate, destroyed 8,000 structures, and killed dozens of people.

“California historically experiences some of the most devastating wildfires in the months of September and October. Do not let your guard down!” Wrote Cal Fire in their October 2 update.

As the August Complex endures, it also continues to move, grow, change, and bring new challenges.

Thursday, the August Complex West Zone jumped containment lines to the North of Zenia, in Trinity County. Firefighters are actively defending structures in the area.

The entire August Complex, which is the largest fire in California’s recorded history, is now 970,563 acres and 51% contained. According to South and West Zone public information officers, there is not yet a specific date for when they expect the fire to be 100% contained, but they are continuing to make steady progress.

The fire is continuing to burn along the northwestern and western perimeters and in large swaths of the interior. As a result, air quality will remain unhealthy and very unhealthy in areas around the fire including inland Mendocino through the weekend. Other fires burning around the state may also contribute to smokey conditions.

As a result of last weekend’s low humidity, high temperatures, and high wind, there was some fire growth in the North Zone near Ruth Lake early this week. Cal Fire believes that some structures and powerline infrastructure may have been impacted.

According to a Cal Fire update from yesterday morning, the fire is continuing to move north of State Route 36 towards Bear Wallow as well as south towards Forest Glenn. The fire is also moving southwest into drainages and valleys south of Ruth Lake.

The Cal Fire update noted that there is a high possibility that the fire will continue to spread into valleys, ravines, and canyons. Firefighters are working to protect structures near the fire perimeter and building containment lines from Post Mountain to the north and west. They are also continuing to monitor structures on the west side of the fire and conduct strategic burning operations near Hettenshaw near the junction of forest roads 30 and 35.

The South Zone, which is 489,380 acres and 70% contained, hasn’t seen much fire growth this week. Public Information Officer Jamie Hart said that they were aware that Sunday’s fire weather could significantly spread the complex and break past fire lines, but felt pretty prepared and optimistic that the work they had done over the past few weeks would contain the fire.

Hart said that in the South Zone, a combination of burnout (areas they purposely burned so they wouldn’t catch again), structure protection, fire lines, and contingency lines, kept the fire from spreading. “After the wind event we actually didn’t have any activity that moved past containment lines or in any places we’d been watching closely,” said Hart.

Additionally, Hart said that in the South Zone, the strong winds that were forecasted last weekend stayed on the ridge tops.

Now that the wind event has passed, the South Zone is continuing to use their resources to patrol the area, check lines, and mop up. They currently have 70 crews, 17 dozers, 140 engines, 18 helicopters, two masticators, one grader, and 11 tenders. At this point, they are retrieving equipment from areas that have been successfully contained and reallocating it to areas of greater need. “We’ve been able to pull things back,” said Hart. “We aren’t pulling everything back but there’s been very little activity.”

As fires continue to burn around the state, resources remain stretched thin. At the request of Cal Fire, 138 National Guard personnel have joined the West Zone to help suppress the fire. Earlier this week, a large spot fire popped up west of the complex around the Mendocino-Trinity county line near Round Mountain. The West Zone is focusing most of its resources on controlling that spot fire and the fire north of Zenia.

Miller said a lot of the fire in the West Zone that is still burning is deep in the Yolla-Bolly wilderness area. Due to treacherous terrain and poor access, they are using helicopters to manage those flames.

They are also continuing to pay attention to communities near the fire. West Zone public information officer Jake Miller said they have “built really strong containment lines all around Covelo” and that they are confident that the fire won’t jump those lines.

The West Zone is 123,328 acres and 55% contained, and while everything seems to be going smoothly, there are still many people and resources hard at work. There are 1623 personnel, 162 engines, 35 dozers, 30 hand crews, 17 helicopters, and 43 water tenders being allocated towards containing the zone.