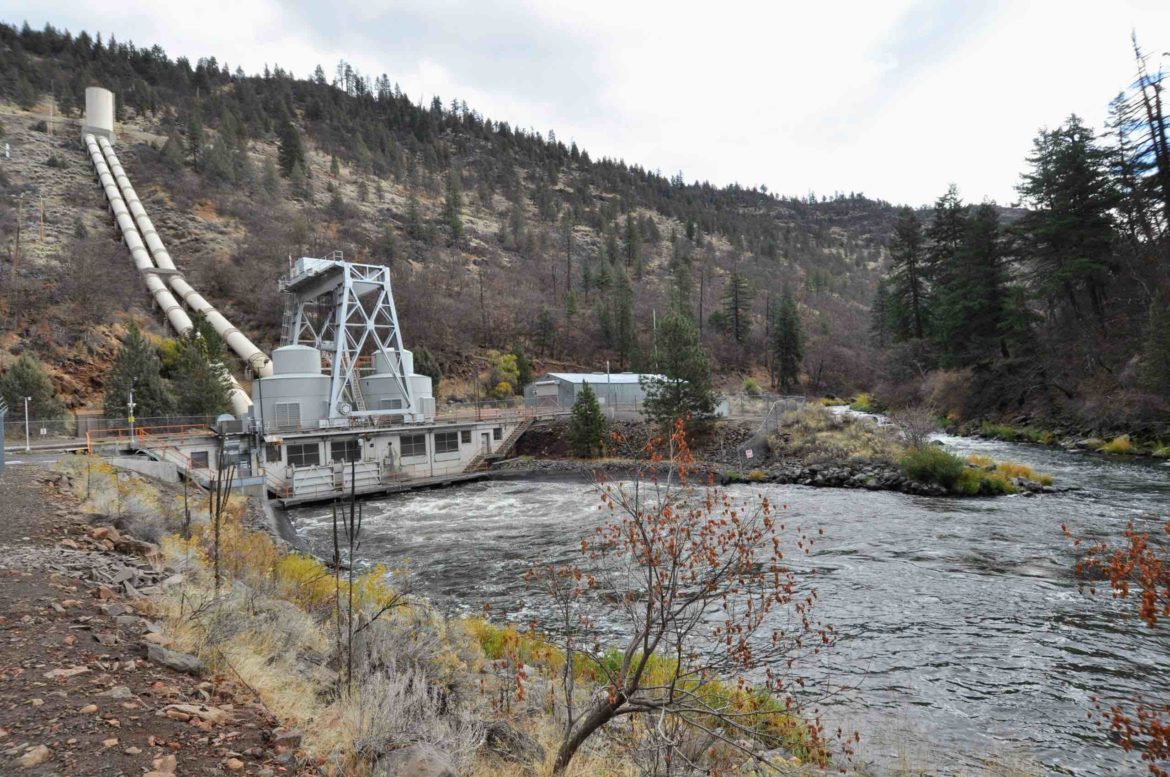 Editor’s note: We had planned to publish this article closer to the date of the forum, but in the past few weeks things have gotten extremely busy and we have a small staff. Still, this is an important subject and we believe it’s in the public interest to hear more about it. So here is our report on the August meeting on the impact of the Klamath River dams on tribes, fisheries, the environment, and downstream stakeholders, a tad bit late.

During the course of the panel, which was live streamed and is available on YouTube, the parties spoke about their desire to remove four Klamath River dams owned by PacifiCorp, a power company which serves 1.9 million customers in the western United States and is a subsidiary of Berkshire Hathaway Energy.

All parties except for Bolton called for dam removal to begin immediately. They cited the dam, which has no fish passage, as the primary reason for a ruined salmon fishery in the region, stagnant river water filled with the dangerous liver toxin microcystin aeruginosa, or blue-green algae, as well as a dramatic loss of income and painful injury to tribal cultural practices.

Congressman Huffman opened the panel with a short address about how the dams have damaged the Native peoples who rely on a healthy Klamath River.

“For centuries the development of what has become modern day America has come at the expense of Native peoples. We often talk about this as if it’s just some distant, disconnected chapter of our past that we feel bad about but we’re powerless to remedy, as if we don’t do things like that anymore. Except that it’s not a closed chapter of history, and we’re still doing it,” he said.

Bolton spoke of PacifiCorp’s concerns about the potential cost of dam removal. Originally, dam removal was supposed to begin this year. However, a notable change in the original deal agreed upon by state, tribal, and business parties would leave PacifiCorp liable for potential damages caused by dam removal, something they are not happy about. Now, rather than moving forward with removal as planned, PacifiCorp is back at the negotiating table.

As Senator McGuire noted towards the end of the panel, Bolton focused primarily on the economic implications of dam removal, while McGuire, and the other panelists, focused on the environmental, cultural, and economic degradation the dams continue to cause.

Ten years later, in 2010, a settlement agreement providing a framework for potentially removing the dams, the Klamath Hydroelectric Settlement Agreement (KHSA), was signed by around 50 signatories.

This year, in 2020, the dams, which supply a relatively small amount of energy, are still up. The dams produce 716,000 megawatt hours of energy per year. The smallest nuclear power plant currently operating in the U.S. generated 4,689,440 megawatt* hours of energy in 2018, around six times as much energy as the Klamath dams.

Those who would like to tear the dams down claim that PacifiCorp is dragging its feet on the finalization of the KHSA agreement.

“PacifiCorp has slow-walked, hedged, and delayed dam removal,” said Huffman. “Delay is bad for all the parties except one, PacifiCorp. The Klamath River and people who depend on it are running out of time.”

Speaking directly to Bolton, Huffman said, “This river is dying, the fishery is dying. Your dam is causing a toxic concentration of algae that is the worst in the world.”

Bolton did not agree with Huffman’s characterization that PacifiCorp has tried to hold up dam removal. He said PacifiCorp felt the same urgency to remove the dams as the state representatives, tribal leaders, scientists, and advocates for the salmon fishing industry.

“I am here to underscore PacifiCorps commitment to seeing the KHSA [Klamath Hydroelectric Settlement Agreement] to the end,” said Bolton. “We’ve listened and we recognize the importance of what dam removal means to tribal communities, to the states of California and Oregon, and to other parties, and we understand their perspectives.”

Bolton claimed that the delay of the dam removal was due to a July 16 FERC decision, in which FERC decided that PacifiCorp could not transfer its dam license to Klamath River Renewal Corporation, a nonprofit organization created solely to oversee the removal of the four PacifiCorp dams.

This FERC decision is very important, because one of PacifiCorp conditions for moving forward with the KHSA is that the company be protected from liability for potential damages caused by removal. Essentially, PacifiCorp wants to ensure that they will not end up having to foot the bill.

Because FERC decided PacifiCorp could not transfer over the license, a decision Bolton consistently referred to as a “curveball,” PacifiCorp is not moving forward with dam removal at this time. Instead, they are working on new negotiations.

“They [FERC] fundamentally changed the conditions and the economic considerations of PacifiCorp,” said Bolton. Bolton said PacifiCorp is concerned about its customers, because PacifiCorp rate payers would see their bills go up, as PacifiCorp plans on passing the cost of dam removal to its customers, not only in California and Oregon, but possibly in other western states it services.

“We can make the right decisions when we center our customers and look for their best interest in everything we do,” said Bolton when explaining why PacifiCorp is hesitant to move forward with dam removal.

Notably, California has committed hundreds of millions of dollars to help PacifiCorp with the costs of dam removal and rid them of their Klamath River assets.

Huffman urged PacifiCorp to consider morality when making their decision.

“As this work continues I expect Pacificorps to honor not only it’s legal but it’s moral obligations. You talked about the balance of the decision you’re weighing as if it were purely something you hash out in a boardroom. You can’t do it that way, you have to think about the lives and livelihoods and the impacts downstream that you have been allowed to ignore. As you consider this crossroad, you’re not powerless to protect your ratepayers, as I said at the outset of this forum, you can join in with the settling parties and the dam removal entities to get this done on time, on budget.”

Bolton explained that due to the recent FERC decision, PacifiCorp has gone back to the negotiating table, trying to write up a new agreement. He said he hopes that the agreement will be completed soon, but did not provide a timeline.

But tribal leaders said they don’t want the dam down soon, they want it down now. “2020, that was the year the Klamath dam was supposed to be coming down,” said Yurok Tribal Chairman Joseph L. James. “Right now, not years from now, but today. The PacifiCorp license expired 14 years ago, now they say more delays are necessary, meanwhile the river is dying.”

PacifiCorp has been receiving temporary, one year licenses since the expiration of their old license while they work to figure out a plan forward for the dams.

“Nobody talks about the risk to the Yurok tribes, there’s no risk package or liability reduction for tribal culture or the Klamath river itself,” said James.

Chairman of the Karuk Tribe, Russell “Buster” Attebery, said dam removal would be a dream come true. A few years ago, Attebery had to put a moratorium on fishing, because the salmon runs were so low and he wanted to help the situation. He said the day he had to go tell the elders that there wouldn’t be any fish for the year was his saddest day as chairman.

“I grew up and I spent most of my time in the creeks fishing and watching the fish in abundance, to be able to see that again would be a dream come true,” he said.

The chair of the Subcommittee for Indigenous Peoples of the United States, Rep. Ruben Gallego (D-AZ), shared James’s and Attebery’s concerns, and urged the dams to be removed so that the river could return to its natural state.

Advocates for the salmon industry and scientists also called for the river to be restored to it’s natural flow.

Glen Spain, a representative from the Pacific Coast Federation of Fishermen’s Associations, cited some astonishing losses in salmon landings (a measure of fish that are caught and sold in a specific area). He said that over the past 40 years, the Port of Eureka has lost 96% of it’s salmon landings, Crested City has lost 98%, and that other extraordinary losses have taken place as far north as Florence, Oregon, and as far south as Fort Bragg, CA — the area the Klamath’s salmon have historically traveled between.

Spain emphasized his point by saying that those percentages lost of salmon landings mean there are those same staggering losses in people’s incomes.

Spain claimed that this is all happening because the PacifiCorp dams are blocking more than 420 stream miles of once productive habitat for spawning and rearing, and that the dams have altered the entire ecology of the once fast moving, cold water mountain stream. The river is now more stagnant, warmer and filled with toxic algal blooms and parasites.

Dr. Jacob Kahn, who has his Ph.D. in aquatic ecology, elaborated on the issue of toxic algal blooms. Kahn said that toxic algal blooms are present in the worst concentration in the world in one reservoir created by a PacifiCorp dam. In Copco Reservoir, which lies on the Oregon-California border, the concentration of blooms is thousands of times the acceptable level for health.

According to Kahn, toxic algal blooms found in Copco range between 10,000 parts per billion (ppb) and 50,000 to 60,000 ppb. The main public health thresholds for the toxic blue-green algae are caution, at 0.8 ppb and warning, at 6 ppb. Kahn, who works at Aquatic Ecosystem Sciences LLC, a firm specializing in ecological research pertaining to hydrologic systems and with a special emphasis on cyanobacteria, said the only way to remove this issue is to remove the dams.

Other panelists including chair of the California State Water Resources Control Board (which is responsible for implementing the clean water act and California’s Porter-Cologne act), Joaquin Esquivel, shared concerns about the downstream impact of the dams.

Esquivel said that although the Water Resources Control Board is not party to the Klamath Hydroelectric Settlement Agreement, or KHSA, they did conduct an analysis of available information and science on the removal of PacifiCorp’s Klamath River dams.

“The Klamath River basin historically supported one of the largest salmon populations on the west coast. Beginning in the 1900’s the Klamath River has been altered by the construction of large dams,” Esquivel said. Those dams include the dams now owned by PacifiCorp.

“These four dams limit anadromy in the Klamath River and have resulted in a loss of salmonid habitat upstream of them as well as impairments in water quality, changes in river flow, and adverse impacts to american peoples traditional ways of life,” he said.

Bolton said PacifiCorp may not remove the dams. “Well what we’re examining now is that the changed condition of the FERC order and their preference for PacifiCorp to effectively be the dam removal entity, takes on, frankly, costs and liabilities that were not considered as part of the original settlement agreement,” he said.

He continued, “Our priority has never been dam removal or dam retention, our priority is what is the best for our customers.”

In September, Huffman and two other members of the House of Representatives, Rep. Raúl M. Grijalva and Rep. Debra A. Haaland wrote a letter to Warren Buffet asking him to, “follow through on [his] promise to remove dams, [and] provide justice for tribes.”

The letter can be found here.

*Megawatt hours are used to measure electrical output. One megawatt hour is equal to one million watts of energy being used in one hour. A watt is the basic unit of power, and is equal to voltage times current