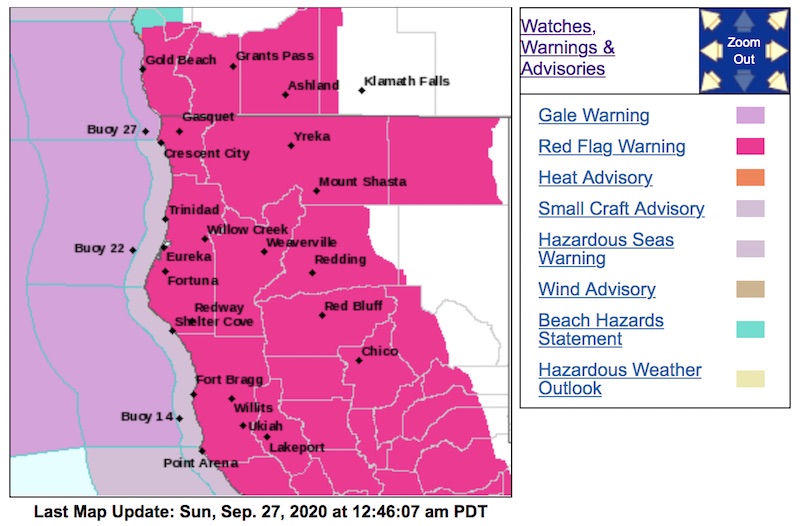 UPDATED 9/27/20 — The National Weather Service’s Eureka office has expanded the red flag warning to include all of Mendocino County, Lake and Humboldt counties, and most of the North Coast from Sunday at 5 a.m. through Monday at 9 p.m., although Mendocino County is currently not included on the PG&E list for planned power shutoffs. Fire weather, including high temperatures, are expected over the next several days, and there are red flag warnings and planned power shutoffs that may be implemented across Northern California.

The red flag warning includes portions of the August Complex Fire, parts of which may increase in activity or flare up over the next several days. Portions of Mendocino County remain under evacuation warnings and orders due to the fires, and residents of those areas should stay on alert for increased fire activity. The red flag warning means that critical fire weather is expected, including high temperatures, low humidity, high winds, and is expected to last until Monday evening at 9 p.m.

As of early Sunday morning, there are a very small number of PG&E customers in Lake County, but none in Mendocino County, that are included in the map of planned power shutoffs. PG&E is planning to implement shutoffs across 16 counties, impacting 15,000 customers, which will begin at 2 a.m. today, Sunday.

The predicted offshore winds may also bring an increase of smoke to the area, and a decrease in air quality over the next several days. The United States Forest Service and Cal Fire are including updates on the meteorological forecast on the August Complex Fire as it relates to fire activity and air quality on social media and in daily incident reports, and we’ll continue to update you as information becomes available.

Here’s our wildfire and emergency resource guide, which includes information about where to find the most current information from government agencies about the weather, air quality, fires, and other sources, as well as guides to wildfire preparation and safety tips, and much more. The original article with additional details is included below.

WILLITS, 9/25/20 — With record heat, low humidity, and strong offshore winds forecasted to begin this weekend, the Eureka office of the National Weather Service has declared a “red flag warning” for the eastern Mendocino and Humboldt counties, as well as in southern Trinity and northern Lake counties. As a consequence of this expected fire weather Pacific Gas & Electric is also projecting a risk of a planned power shutoff (what they call a PSPS) in Mendocino County, though they are currently only actively planning for one in the northern Sacramento Valley and Sierra Foothills areas.

The red flag warning begins Sunday and will continue into Monday. Though the weather has been autumnally breezy and cool for the past several days, temperatures are expected to spike tremendously this weekend and remain high through next week. Then beginning this weekend or early next week an offshore wind event is projected to bring hot, dry, northerly and easterly winds. Unfortunately, the the areas under a red flag warning are exactly those where the August Complex fire has been burning now for over a month, and this new bout of weather might well bring increased fire activity, and with the shift in the winds, once more blanket our region in noxious smoke.

As of time of publication no power shutoff had been actively scheduled for Mendocino County or the larger North Coast; however, Mendocino, Sonoma, and Lake counties are all under a “PSPS watch”, the second highest threat of a power shutoff. This means that depending on the forecast there is some risk that a shutoff will be planned for our area in the coming days. It is important to remember that these shutoffs are done preemptively, rather than reactively, and so depend on forecasts for their scheduling rather that on current conditions. In other words, a shutoff is meant to begin before winds reach critical speeds rather than once they’re howling.

Yesterday evening PG&E issued a press release saying that they expect what they call a “PSPS” (an intentional power shutoff) to occur in Butte, Plumas, and Yuba counties,

While there is still uncertainty regarding the strength and timing of this weather system, the shutoff is currently expected to impact approximately 21,000 customers in portions of Butte, Plumas and Yuba counties. This weather event will be localized to the Sierra Foothills, so customers in the Bay Area and southern parts of PG&E’s service area will not be impacted.

The red flag warning applies to areas above 1500 feet in elevation, where ridge top high winds are more common, and humidity typically does not recover as well overnight due to a lessened coastal fog influence at higher elevation. however, much of the area (perhaps most) under the warning is above 1500′ anyhow. As a benchmark, Willits, which is not inside the warning area, sits just shy of 1400′, and the red flag largely applies to the hill country to the east.