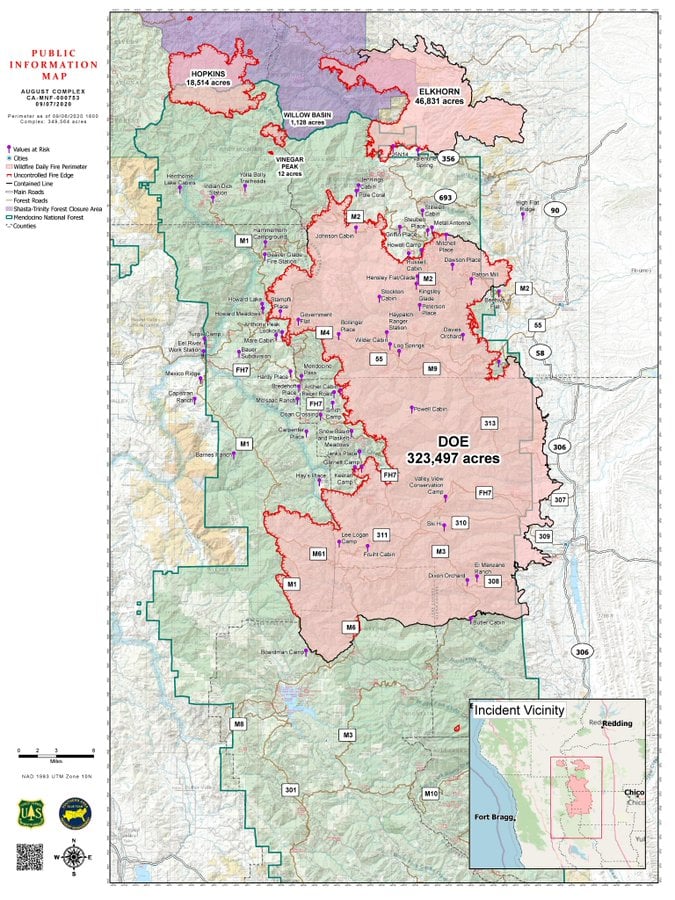 MENDOCINO Co., 9/7/20 — New evacuation orders have been issued due to the growth of the August Complex Fire today, including in the Lake Pillsbury Ranch area in Lake County. Additionally, the United States Forest Service has ordered a temporary closure of all day use and campsites within the Mendocino National Forest beginning at 5 p.m. this afternoon, September 7, with no current time provided for re-opening.

As of Monday morning, the August Complex Fires had reached a total of 349,565 acres, with only 24% containment, and the fire weather predicted for the next several days will likely grow the fire substantially. An updated acreage and incident report is usually available in the evenings.

The August Complex Fire has grown over the last several weeks to become one of the fourth largest wildfire in modern California history — with the Mendocino Complex Fire, which also burned large portions of the Mendocino National Forest in 2018, as the largest ever recorded. Fire analysts have noted that the fire has been slowed when it reaches burn scars within the forest, but the fire is anticipated to continue burning for some time within the forest area, as the containment lines that have been identified to have the greatest chance of success are some ways from the fire’s current boundaries.

This fire has been the primary source of the smokey air in Mendocino County, and with so much left to burn, it may be that smoke conditions persists for potentially weeks longer.

The complex includes several fires that have now merged, and has been contributed a significant amount of smoke across Northern California, especially in north county locations such as Covelo and Willits.

USFS incident page for the August Complex can be found at this link, and includes daily updates. There are also updates and daily live briefings posted on the Mendocino National Forest Facebook page. The information line for the fire is 530-487-4602. The Mendocino County Sheriff will issue any evacuation warnings or orders that occur within the Mendocino County borders. Our previous coverage of the August Complex Fire can be found at this link.

Here’s the USFS temporary forest closure details, which also forbid the use of any camp stoves or camp fires within the forest: