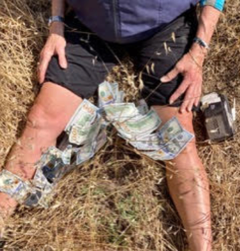 Five SOBs, members of the Fort Bragg Seniors on Bikes, were cycling up Sherwood Road this past Sunday, September 6, around 10 a.m., heading for the mud pots at Glen Blair. Susan, in the lead, suddenly hung a U-turn in the middle of the street, backtracked, jumped off her bike, and triumphantly held up a crisp new $100 bill she’d spotted on the side of the road. With some chagrin that the rest of us had missed this find, we graciously congratulated her on her good luck and continued our ride.

A few moments later and not more than 200 yards further on, around a turn, we stopped, awestruck by the sight of $100 bills everywhere! Maybe we were all lucky.

We scampered around gathering up the bills from the blacktop and the surrounding ditches. A wallet was found, and with it an assortment of bank cards, insurance cards and a driver’s license. Could it be drug money? Who else carried so much cash? How in the world did it end up scattered on the road? We pondered the mystery and our possible (literal) windfall and continued on. We trusted Susan to carry the loot. When we got to the mud volcanoes she dumped the money out on the ground and counted – 40 new $100 bills and a few old singles

$4,000 split 5 ways? A $100 bill to each of us as a finder’s fee? Take the wallet and the money, or just the wallet, to the police station? We each pondered these questions individually as we strolled among the mini mud volcanos of Glen Blair after deciding to discuss and vote on the matter later.

Stopping at Susan’s house for a shared lunch after the ride, we examined the found wallet more closely. The i.d. address said Eureka. The receipts came from stores in Eureka from just a day earlier. Seemed suspiciously like a drug dealer briefly visiting in Fort Bragg for a sale. We decided to play detective and researched this possible felonious character online. We found lots of info on the young man and then Pam discovered he and she had a Face Book friend in common. Pam texted her friend and learned the young man, 26 years old, was a working stiff and not a drug dealer at all. Obtaining a phone number from this intermediary friend Joy called him. Turns out he had had the cash in hand to buy a trailer to live in while he worked construction in Chico.

Finding the young man through Facebook and actually connecting with him within a half hour, was as almost as astonishing as finding the money on the road in the first place. Within a couple hours he was back in Fort Bragg, and at Susan’s house to collect his loot and his wallet. To say he was relieved, happy, and grateful is an understatement. He was almost shaking at his reversal of fortune and the kindness of strangers. He said he had left his wallet on the back of his flatbed truck when he got gas but didn’t realize he had lost it until a couple hours later when he was in Ukiah. We must have ridden by just a few minutes after his wallet went flying into the road and the wind scattered its contents.

At Susan’s house, she and he talked very briefly; he gave her a hug, and said goodbye. Then as he walked toward his truck, he turned back and said “bless you”. A lovely and fitting end to a very unusual day.

2 thoughts on “Letter to the editor: Seniors cycle, find cash and a happy surprise”