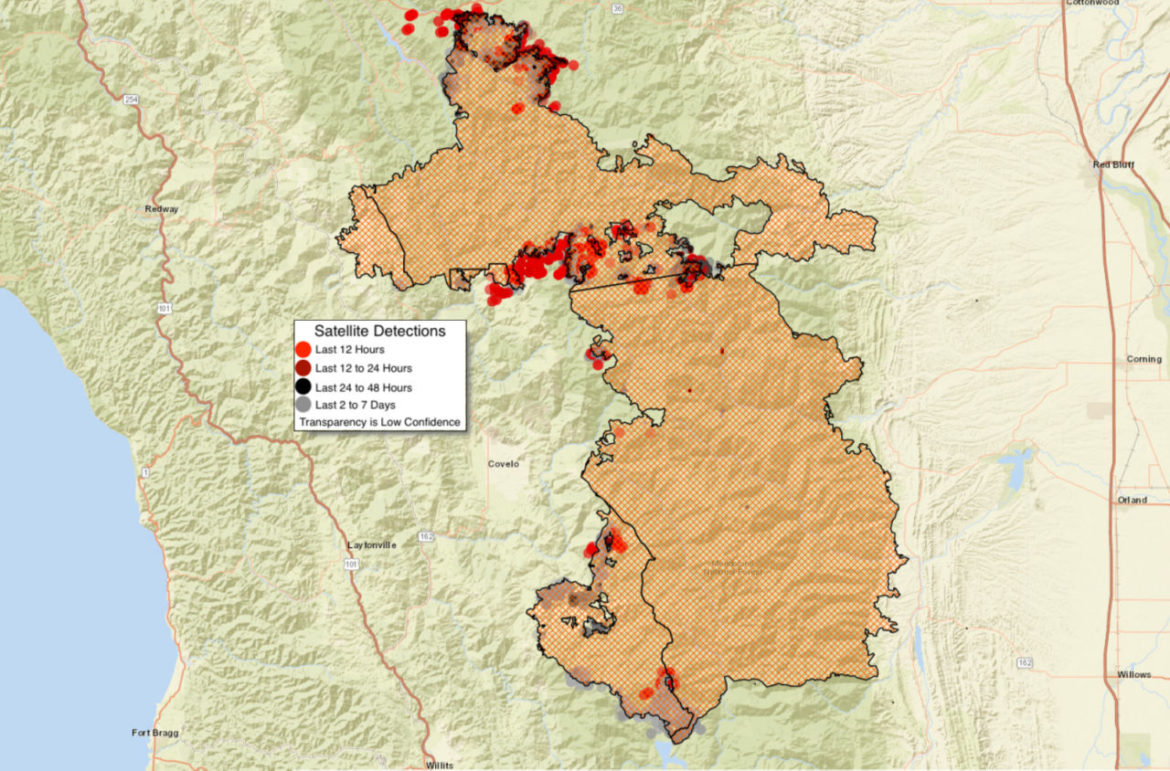 MENDOCINO Co., 9/27/20 — As another bout of fire weather bears down on Northern California the unified command of Cal Fire and the Mendocino County Sheriff’s Office has issued renewed evacuation orders and warnings, concentrated along the northern edge of the fire. Sections of Mendocino, Humboldt & Trinity counties are under a red flag warning, as are all of Sonoma, Lake, and Napa counties.

(See a larger version of the evacuation map here)

Though these evacuations portended a dicey night, conditions are not expected to be as bad in Mendocino County as in other parts of the state, and PG&E has no plan to do any planned power shut-offs in Mendocino as of time of publication. A small number of customers will have their power cut in the area where Napa, Sonoma, and Lake counties, a region of dry, high hills that are especially prone to high wind and low humidity. Far more customers will have their power cut in the Sierra Foothills region.

(See below for the specific areas newly under evacuation order)

By afternoon the blustery winds had stirred up significant new fire activity and large plumes of smoke were once more flowing west and south into the the valleys of Mendocino County. The inclement weather is expected to continue through Monday, with high heat expected to continue into the middle of the week.

Earlier this last week Cal Fire took advantage of the good weather to accomplish incredible feats of engineering and fire protection, laying down over 200 miles of containment lines along the western boundary of the fire, as well as setting almost constant backfires.

Work in the past few days has been furious as forecasts have turned grim, with the expectation of strong, dry northeasterly winds of the kind that have resulted in great destruction in the past few years. Firefighters are widened firebreaks in may areas, and used the very larger air tankers to drop thousands of gallons of retardant in strategic areas. The hope is that these new containment lines will hold as winds reverse, and the fire is once more pushed towards the more populated regions of Mendocino.

The August Complex officially stood at 873,079 acres (1,364 sq miles, or about 30 times the size of San Francisco, and larger than Rhode Island or between the size of Marin and Sonoma counties) and 70% contained in the west division. Cal Fire is currently projecting achieving full containment by end of month.

The areas of the fire to the east of Covelo, east of Willits, and north of Lake Pillsbury have been quiet recently. But to the north, near Mina Road, as well as on the opposite side of the fire near SR-36 activity has remained intense.

Zone Q: South of the County Line, west and north of the North Fork of the Eel River, north and east of Bald Mountain Road.

Zone V: East of Eel River, south of East Fork of Asbill Creek, west of Tank Creek, north of the Covelo Valley Floor and Alder Creek and Tin Cabin Creek.
* Reminder – EXISTING WARNINGS remain for several areas of MENDOCINO COUNTY, and residents should be vigilant and ready to evacuate.

The public is reminded to stay vigilant on current fire conditions. Please continue to adhere to road closures and any Evacuation Warnings and Evacuation Orders. Please remember to drive slowly and yield to emergency personnel in the area. There may still be smoke in the respective areas as firefighters continue their suppression operations.