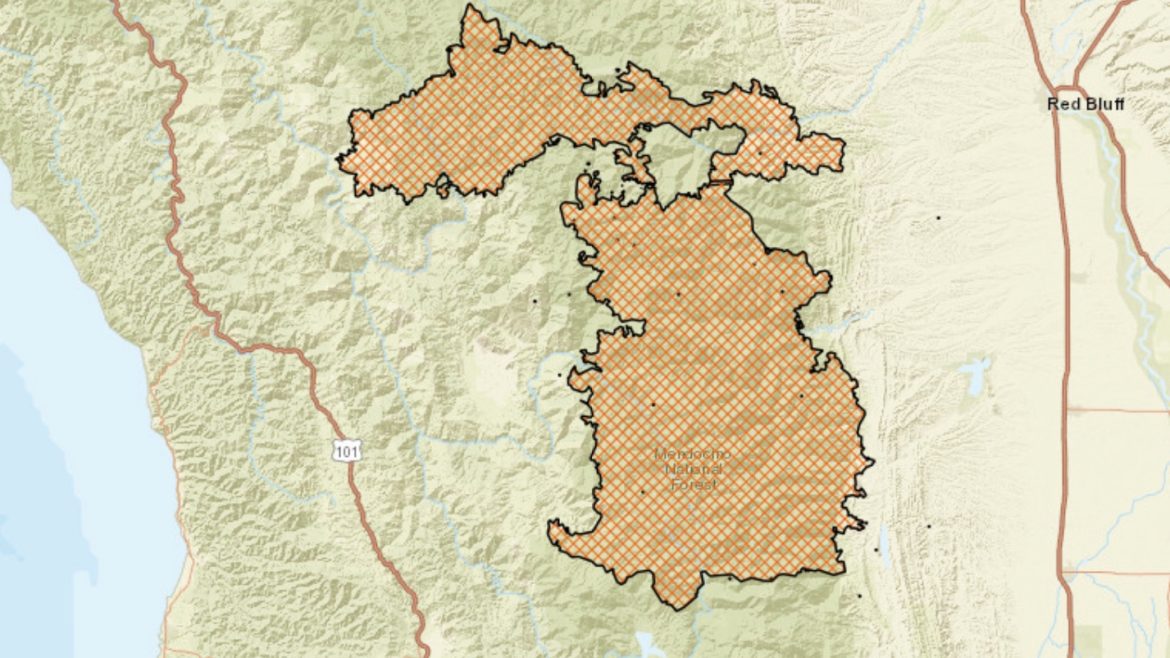 UPDATE, 9/14/20, 8:45 a.m. — New surveying and analysis by Cal Fire have created a far more accurate map of the August Complex and have correspondingly revised the average of the fire down to 755,603 acres. This is still enormous — 300,000 acres larger than the Mendocino Complex of 2018 which previously held the title for largest fire — especially given that the blaze still has potential to grow with the new southwesterly winds expected this week.

Yesterday evening new evacuation orders were issued for a region northeast of Willits, above Hearst along the northern and eastern bank of the Eel River. Today’s improved mapping shows “finger” of fire pushing its way in an arc north of Sanhedrin Mountain. Cal Fire note in its morning update that the fire is position to make quick runs up ravines and canyons (which Cal Fire refers to as drainages) that align with the shifting winds.

The weather situation this week does not look ideal for firefighters. A wet system will bring stronger winds along with higher humidity, though only the barest chance of precipitation in the fire zone. Still, these winds will by and large push fire away from the more populated areas of Mendocino County, and Humboldt, though they may bring renewed threat to communities in Trinity County.

UPDATE, 9/14/20, 1:00 a.m. — New evacuation orders were issued on Sunday evening as a result of increased fire activity near Sanhedrin Peak. Satellite infrared heat maps show that the fire has now reached the northern flank of Sanhedrin Peak (called Big Signal Peak on some maps) and may be making its way up the mountain.

• South of the Middle Fork of the Eel River, west of Eden Creek, north of Salt Flat and east of Salt Creek, ZONE- AB

• East of Brushy Mountain, south of the fire road on Salt Flat, west of Eden Valley and north of Bald Mountain, ZONE- AC

• South and west of the Eel River, north of Foster Mountain Road, east of the ridge west of Willits Road, ZONE- AD

To support fire control operations and fire activity, the Mendocino County Sheriff in conjunction with the Unified Command Team for the August Complex -West Zone, has ordered an additional Evacuation Order and Evacuation Warning.

View the most current evacuation map at: https://tinyurl.com/MendoEvac

WILLITS, 9/13/20 — The August Complex continues its march into the record books, hitting 877,477 acres as of this morning, larger than the state of Rhode Island. In a more locally relevant comparison, the fire is larger than Marin County, and is approaching the size of Sonoma County. And though the pace of the fire’s growth has slowed substantially, its sheer enormity means that it will likely not be fully extinguished internally for some time — perhaps until the rains arrive.

Stretching from Trinity County (near the Humboldt Line but not over it), through Tehama, then Glenn and Mendocino counties and finally into the Lake County, the western edge of the fire remains a roughly 100 mile long line of uncontained fire, with most of the 25% containment along the eastern and southern edge of the fire in Glenn and Lake counties. This western edge is the responsibility of Cal Fire, which has assumed control of the August Complex West Zone, with federal authorities still in control of the North and South zones.

At a special Mendocino County Board of Supervisors meeting, on Friday, at which the Board declared a local disaster, Unit Chief George Gonzalez, of the Cal Fire Mendocino Unit, said confidently that though this 100 mile long fire front was unprecedented in Cal Fire history, they would stop the fire’s progress into more populated areas.

A significant improvement in the weather over the past several days has allowed firefighters to do important back-burning work — setting controlled blazes that burn towards the main body of the fire, such that as it moves west it’ll run into areas of “black,” where there are no combustible materials. Also importantly, Cal Fire has been constructing “contingency” dozer lines along the ridges between Covelo and the fire, ensuring that if the fire does reach that far, it will not cross these hard containment lines into the valley.

Firefighters continue to struggle with even accessing the fire, in this remote and rugged area with few roads. The access issue means that it has been difficult for firefighters to “go direct” on the fire, that is directly trying to put it out at the fire front instead of building containment lines, contingency lines, and doing back-firing operations, further from the open fire line.

So while containment on the western edge of the fire remains officially at 0%, in reality substantial contingency dozer lines, and back-firing has occurred that will protect communities near the fire if it begins to move more rapidly west.

The weather is shifting today as a Pacific weather system comes on shore bringing brisk southwesterly winds. That system is expected to dump some amount of rain on Oregon, and maybe a little on Del Norte, but precipitation in Mendocino County is expected to be less than a tenth of an inch for the week, if anything. However, the system will bring some wind, which is already increasing fire activity somewhat.

That wind will “scour” out some of the smoke, as well as leading to greater mixing up and down through the atmosphere which will clear the air. However, with clearer air will come higher temperatures, and this combination of wind and heat will likely mean more fire activity — though increased humidity is also expected. Still, with the winds coming from the southwest, there is less reason to fear this weather event.

All areas previously under evacuation remain so, and people are urged to leave the area. However, several people remain in the immediate vicinity of the fire, for instance at the Black Butte River Ranch, where the owner and workers have been feeding firefighters and taking in evacuees from further up the hill.

The Forest Service announced yesterday that it may be possible for residents to make trips into the evacuation zone to take care of crops, livestock, and the like and to contact the Forest Service at 510.934.3316.