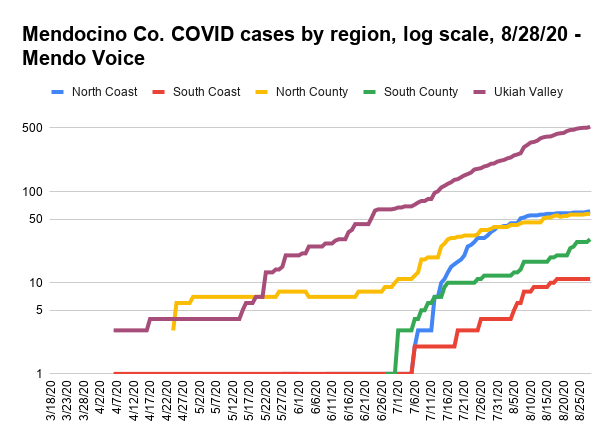 WILLITS, 7/24/20 — For the first time since early June, before the current surge in the local COVID pandemic had begun, the number of active cases (people in isolation, hospital, ICU, or dead) has surpassed the number of people released from isolation, a grim sign of the accelerating pace of the spread of the disease.

This inauspicious milestone was reached today when 15 new cases were announced — the second largest number of cases yet counted in one day — including one more death, this time at the Sherwood Oaks nursing home in Fort Bragg. That death comes one day after another person died at Howard Hospital in Willits. With today’s death Mendocino County has seen four people die of the coronavirus disease less than a week, bringing our mortality rate to 2% — still somewhat lower than the national observed case-fatality.

Another trend that’s become clear is that the Latino (mostly Mexican-American) community has been the worst hit:

WILLITS, 7/23/20 — Another person died of COVID in Mendocino County today, read about it in the article below, scroll down for information on the appointment of Dr. Coren.

WILLITS, 7/21/20 — Dr. Howard Andrew “Andy” Coren, of Ukiah, will be the next Mendocino County public health officer, replacing Dr. Noemi Doohan. The Mendocino County Board of Supervisors voted to hire the doctor at yesterday’s regular meeting, in closed session. After closed session they reported out that Coren had been hired, with the endorsement of Doohan, and that he was due to begin as soon as possible, and note later than Sept. 1.

Coren graduate from Northwestern Medical School in 1972, and has been practicing family medicine in the Ukiah area for quite some time, including at Ukiah Valley Medical Center.

In other COVID news, 10 new cases were confirmed yesterday in Mendocino County, for a total of 217 — though there were no new hospitalizations, or deaths. The percentage of people in each age bracket seems to be stabilizing though the percentage of cases in Latinos continues to ebb up. Officials are making some progress in contact tracing, and a smaller percentage of cases are listed as “under investigation,” with the leading causes remaining close contact, followed by community spread, then work or out of county travel.

Also at the Supervisors meeting, Jason Wells, president of Adventist Health in Mendocino, explained that the county has 100 hospital beds with 9 currently occupied by COVID patients, or roughly the same percentage as across the state. He noted that projections made earlier in the month predicted that the hospital system could potentially be overwhelmed by the end of August, but that those projections were made with assumption of no additional restrictions. With the new restrictions put in place by both the governor and the local public health officer, it is hoped that the rate of spread of the disease can be slowed such that the hospitals are not pushed to capacity.

MENDOCINO Co., 7/20/20, 7:30 p.m. — The new COVID statistics were released this afternoon by the Mendocino Public Health department and show eight new cases, and one more person hospitalized, with no new deaths. Though the County does not break-out specific movements between categories, because there were no people released from isolation today, and no additional deaths or admissions to the ICU we can say that one additional person was hospitalized, bringing the total number of hospitalized people to nine, with one in ICU.

This level of hospitalization can be fairly easily handled by Mendocino County’s three hospitals. However, at a town hall meeting (virtual) on Friday, Jason Wells, head of Adventist Health in Mendocino, explained that the county’s three hospitals have 100 beds and that as of Friday about 70 were full, and that on that day nine of those beds were taken up by COVID patients.

Here are all the categories:

WILLITS, 7/20/20 — Yesterday, July 19, Mendocino Public Health announced that one more resident of the Sherwood Oaks nursing home in Fort Bragg has died. This is the second death at the nursing home and the third total death in Mendocino County.

Five new cases were announced yesterday, showing a general decline in cases per day, but not too much should be read into the daily new cases numbers — due to the testing schedules, testing numbers tend to get clumped.

The trends also show a bit of a cyclical nature as outbreaks occur, people are infected, people fall ill, need to be hospitalized or placed in isolation, and then die or are released.

Below is a graph breaking out just the hospitalizations, ICU, and deaths portion of the graph above, since those numbers are small enough that they are not clear in the bigger graph.