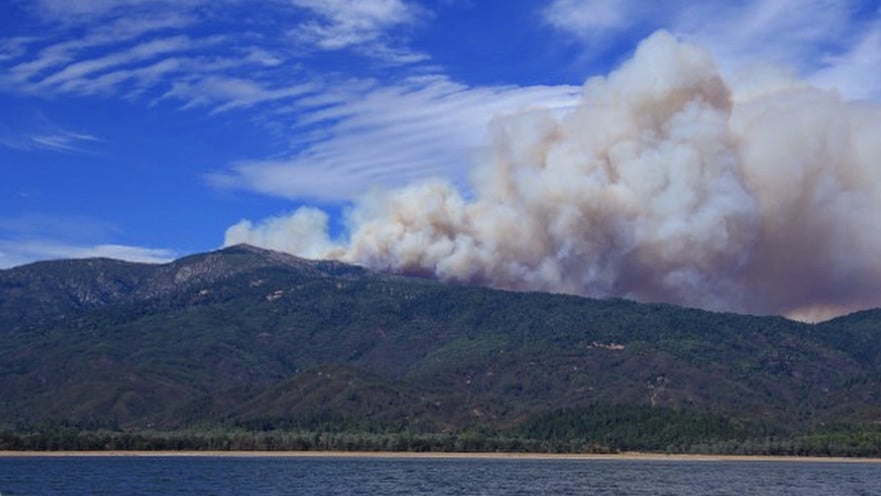 The Hull Fire burning on Hull Mountain, on Aug. 19, 2020, as seen from the shore of Lake Pillsbury. (Josh Stone, Lake Pillsbury News)

UPDATE 8/23/20, 11 a.m. — The Lake County Sheriff’s Department has issued an evacuation warning for Lake Pillsbury in anticipation of fire weather tonight, an with the Hull Fire burning roughly 5 miles from the north shore of the lake.

The Lake County Sheriff’s Office has issued an EVACUATION WARNING for Pillsbury Ranch due to the Hull Wildland Fire.  This area will include: North of M-1, south of the Lake County line, west of Bloody Rock and east of the Lake County Line.  We are asking everyone to take preparations in the event that a mandatory evacuation order is issued.  Preparations should include gathering all medications, important documents, making plans for pets, and notifying family members where you may be going. Those requiring additional time to evacuate or those with pets or livestock should leave the area as soon as possible.  During a mandatory evacuation, it will be extremely hectic and traffic conditions will be very congested.  By evacuating early, you do your part in keeping yourself, your neighbors, and our first responders safe. Should an evacuation order be issued and shelter is needed, you will be directed to a Temporary Evacuation Point (TEP).
See the link below for map:

According to the publicly available reports on inciweb.nwcg.gov, the federal government’s fire website, the Hull Fire is now at 2,500 acres. However, inclement weather overnight might cause the fire to grow quickly.

Here is a map of the fire as of this morning:

And here is the large August Complex in relation:

ORIGINAL
WILLITS, 8/22/20 — The Hull Fire is yet another lightning strike fire burning in the Mendocino National Forest and under the jurisdiction of the United States Forest Service. According a forest service map (view below) of the larger area, the fire has reached 2,400 acres, and satellite infrared heat maps show it moving primarily east, away from the communities to the south, and on a course to merge with the larger August Complex fires.

Given the enormity of the August Complex, with has now burned about 144,000 acres and shows no sign of abating, and its eastern course, the Hull Fire does not appear to be the highest priority. Currently 47 personnel are working the fire.

Here is the press release from the Mendocino National Forest from this morning:

WILLOWS, Calif. — Aug. 22, 2020 — The lightning-caused Hull Fire is located five miles north of Lake Pillsbury on the Upper Lake District of the Mendocino National Forest. It was detected on Wednesday, Aug. 19 after several rounds of thunderstorms occurred across the forest last week. The fire is estimated at 2,000 acres.

There are 47 personnel committed to the incident including seven engine crews, one hand crew and operations managers. On Saturday, fire personnel will use direct suppression tactics and construct handline where possible.

The fire is burning in timber on the north and east aspects of Hull Mountain and is active in Hull Creek, backing down into Rattlesnake Creek and spreading north along Panther Ridge. The fire is threatening cabins to the south and other private property may become threatened as the fire progresses northward.

Air Quality: Smoke in the community of Potter Valley and the Pillsbury Subdivision has degraded air quality. A known sensitive air quality area is located east of the fire in the Snow Mountain Wilderness.

Weather: The forecast shows hot and dry conditions continuing with a chance of lightning again for Sunday through Tuesday. Temperatures will range from 75 to 80 degrees on the ridges.Closures: There is an area closure in place due to the fire activity in the August Complex. The Forest Order and map are posted on the forest website: https://tinyurl.com/yxnh2lkt. Incident information is posted on InciWeb at https:// https://tinyurl.com/y2temre4.