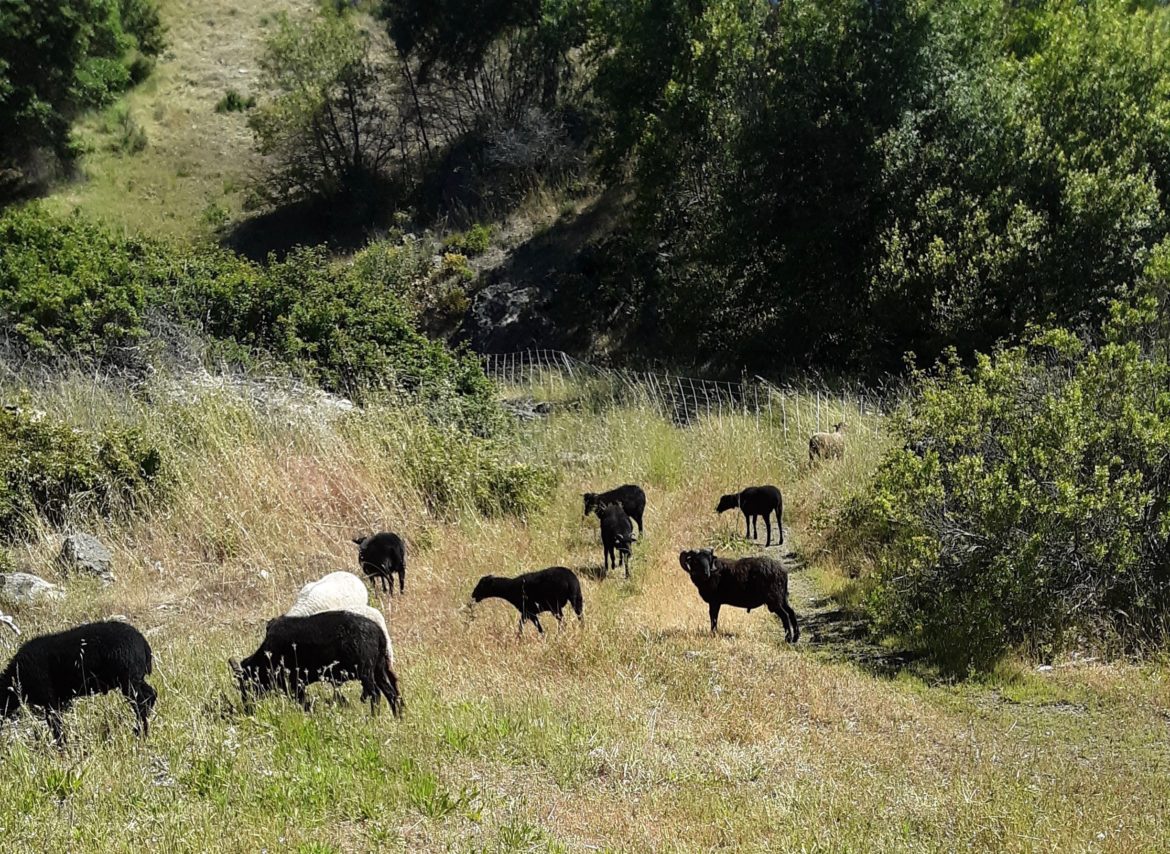 LITTLE RIVER, 8/23/20 — Marie Hoff, who lives and works in Potter Valley, has been grazing her own flock of 20 sheep for almost a decade. But it wasn’t until the 2015 Valley Fire in Lake County, which burned 76,067 acres, that she started thinking seriously about the ways grazing could be incorporated into fire management. Two years later, during the devastating 2017 fire season, Hoff realized catastrophic fire was no longer an anomaly in California, but a regularity. She wanted to help, and she had some ideas brewing of how to do so.

Hoff, and many others in the wool growing community and fire management field, believe sheep and goat grazers can be used to protect communities by targeting areas with high fire risk and using the animals to reduce surrounding hazardous fuels.

However, fuel management agencies haven’t always been able to see the service that these animals could provide, explained Hoff, who runs the Capella Grazing Project.

So since 2015, Hoff has been organizing with fellow wool growers to explain the benefits of grazing as a fire management tactic, to get local and state funding specifically allocated for grazing to manage vegetation, and create an organized and efficient system to connect shepards with landowners, making grazing an accessible land and fire management method.

Much of this work culminated in a letter, which Hoff heavily contributed to, about the successes and potential of grazing for wildfire management. The Wildfire Ad Hoc Committee of The California Wool Growers Association, a nonprofit trade organization representing sheep and goat producers sent the letter last week to a variety of nonprofits, and state and federal agencies, including Cal Fire, the US Forest Service, and Fire Safe Councils, according to the associations Wildfire Ad Hoc Committee chair, Roger Ingram.

“Fire season in California has become a year-round issue,” the committee wrote in their letter. “Wildfires are not only more frequent but far more devastating. Targeted grazing saves important ecosystems and neighboring cities and towns that may be threatened by wildfire by reducing vegetation before it becomes a hazard. Used with consistent success by many public agencies to manage fuel load, grazing also includes the co-benefits of increased carbon sequestration, provides an ecologically-sensitive alternative to chemical herbicides, is popular with the general public, and supports the future of agriculture in California.”

Climate change has caused increased wildfire activity around the world. It has doubled the amount of land that has burned in the western United States. However, climate change on its own doesn’t create wildfire-driven disasters – it is the combination of climate change, human land-use and forest management which can make fires more severe, and the exposure to and vulnerability of populations to that fire.

In 2017, when the Redwood Fire tore through Redwood Valley, Hoff and her fiancé packed up their belongings, including, of course, Hoffs sheep, and evacuated to Hoff’s fiancee’s parents. “Which is a really great way to bond with your future family,” joked Hoff over the phone. They assumed the evacuation would be quick, that they would turn around and head home the next day. They were wrong.

The evacuation lasted almost three weeks. During that time, Hoff started thinking about how targeted grazing, grazing in areas with a high risk of passing fire from forests to communities, such as wildland urban interfaces, could reduce fire risk and keep people safe. She started writing emails, encouraging others to consider how grazing could be expanded to reduce fuel loads, and getting more involved with California Wool Growers Association and the growing, statewide movement to use sheep and goats for fire management.

Grazers, such as sheep, goats, and cattle, can remove brush, “flashy” fuels (materials that ignite easily and burn quickly), and ladder fuels (live or dead material that serve as a pathway for surface fires to move up into taller shrubs or trees), from all sorts of landscapes.

When thinking about fire management, Hoff asked herself, “how are we using taxpayers’ dollars to keep people safe? How are we preventing these expensive, dangerous fires from happening?” She thought then, and still does think, that one effective and economical way to keep people safe and protect the environment is to allocate funds for targeted, contracted grazing in tandem with geospatial mapping — online mapping which can show elements closely related to fire such as topography, brush levels and tree density.

She envisions a contracted grazing program where public and private landowners can reach out to grazers and work with them to figure out what combination of grazer(s), prescribed burning, and mechanical methods could be used together to most efficiently and effectively to manage fire risk.

Hoff believes that with the right tools and information, grazers could choose the most effective livestock for the job to target areas that pose high fire risk, especially difficult landscapes, “basically reducing ladder fuels so that when there are fires they’re low intensity fires that benefit the landscape rather than catastrophic fires that kill entire landscapes and turn them into charcoal.”

However, people didn’t always take Hoff and other grazers’ ideas seriously. “One of the problems that we, I mean different contracted grazers were running into was that we would be like “hey, this is a possible solution” and it was as if we were on the sidelines, people weren’t really looking at us. People were like “oh, that’s very charming, you have animals, that’s cute.”

This attitude was one of the first roadblocks Hoff and other grazers had to knock down. “People couldn’t see the service the animals provided,” she said.

Another barrier, which Hoff is still dealing with today, is that agencies that manage brush and fine fuels, such as resource conservation districts, Cal Fire, and the Forest Service, don’t have specific funding for grazing as a fire management resource. “Funding for brush management usually assumes mechanical or herbicide,” said Hoff.

This is somewhat due to exclusion of grazing as a fire management method by agencies that manage brush.

Kevin Conway, who manages Jackson Demonstration State Forest said, “We have a lot of experience with mechanical treatment and chemical treatment. We are pretty capable of using those tools to achieve the objectives we want,” said Conway. “We’re less well versed in how well the animals will eat the vegetation we’re targeting. It will probably continue to be a minor part of our operations.”

Since California was settled by Europeans, grazing animals have been an integral part of the ecosystem. Before European settlement, when the land was managed by native americans, elk, antelope, grizzly bears, and deer all played a role in keeping brush down. And before that, megafauna such as mammoths, ox, bison, camel, and more grazed and browsed California’s grasses. The idea of using animals to graze grasslands and remove fuel is not new.

John Bailey, director of the Hopland Research and Extension Center, has also seen the benefits to using grazers for fire management first hand. In 2018 the River Fire, part of the almost 500,000 acre Mendocino Complex Fire, burned through 3200 of the extensions 5400 acres, taking down oak woodlands, chapperele, and scorching grassland. In the few years before the fire, the land was grazed by 500 sheep, all of which survived the fire. “Overall what we saw was that in areas where we had recent grazing there was much less damage to the oak overstory because there were less ladder fuels,” said Bailey. “We saw really dramatic examples where on one side there had been grazing just prior and on the other side there hadn’t been grazing and on the side without grazing there was much higher Oak mortality.”

Although there are many benefits to grazing, there are limitations as well. A 2015 paper on Prescribed Herbivory for Vegetation Treatment Projects written by the Range Management Advisory Council, the authors listed some of those limitations. Animals need shelter during weather that is too cold or too wet. Grazers tend to leave woody material greater than one inch in diameter, only eating leaves and shoots and will only remove live fuels that are less than about one inch high. Additionally, seasonal variability might impact the way that different plants taste, causing them to leave the ones that aren’t as appealing behind. Another limitation, which is not mentioned in the report, is that grazers need a water source on site.

Proponents of grazing for fire management say there are ways to move around many of these limitations by having a system that can connect the appropriate shepherds with appropriate flocks to the land where they will be most effective at managing fuels.

However, even the most ardent supporters of grazing believe it should be used in tandem with other fire management tactics including prescribed fire and mechanical brush removal. “There are times and places where mechanical means are the best ways to take care of an issue. But right now there is an over reliance on mechanical means.”

Hoff not only wants a greater opportunity to use their skills to help protect communities from fire, but think it’s necessary to make California’s landscape more secure against fire. “We need to figure out how to get natural cycling back into place,” said Hoff. “Because there is no way to actually take care of all the brush in the state causing fire damage every year using weed wackers and mowers, it’s physically just not viable.”