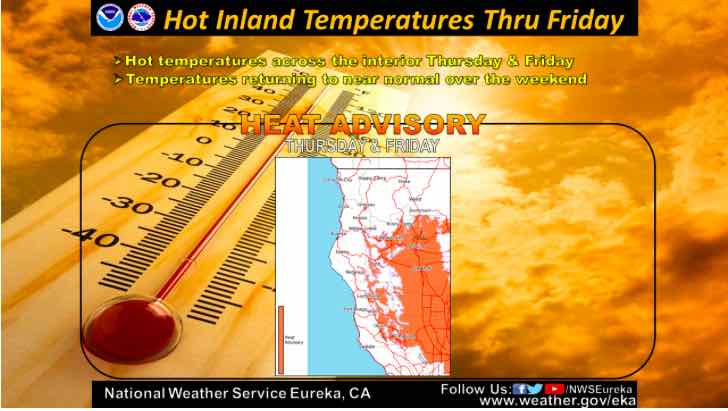 MENDOCINO Co., 6/25/2020 — The National Weather Service (NWS) has issued a heat advisory for interior Mendocino County that will be in effect through tomorrow evening. They have also released a gale warning for the outer waters off the coast from Crescent City to Point Arena and a small craft advisory for all of Mendocino County’s inner waters.

The Ukiah area, Covelo, Redwood Valley, and Willits, among other places will experience highs between 98 and 106 degrees Fahrenheit during the day through Friday. Lows will stay around the high 50s and low 60s. Parts of Humboldt and Sonoma, as well as all of Trinity and, Lake counties, as well as large swaths of inland California from the Oregon border down to Kern County will experience these high temperatures. Some areas in the Central Valley are expected to reach a high of 112 degrees.

Back in Mendo, daytime temperatures will reach the high 90s in Boonville and surpass 100 degrees in Laytonville. Coastal areas that experience marine influence will be spared the heat, as usual.

Out at sea, fishermen should be wary of risky conditions — big waves and strong winds. There will be 25 to 35 knot gale winds blowing in the outer ocean. Steep seas are expected, with 10 to 13 foot waves today that will grow to 11 to 16 feet tonight. Strong winds will continue through Monday night.

There is also a small craft advisory listed by NWS for tidelands along the coast from southern Cape Mendocino to Point Arena, will have winds from five to 25 knots and north waves will range from eight to 12 feet, while west waves will range from two to three. The small craft advisories for inland waters stretch far past Mendocino, all the way from the Canadian border to Santa Cruz.

To stay safe from the heat, the National Weather Service reminds people to stay out of the sun, check on neighbors and relatives, avoid strenuous activity during the day, learn signs of heat stroke and heat exhaustion**, and to not leave children or pets in unattended vehicles under any circumstances.

For turbulent waters, NWS urges mariners to change their plans in order to avoid hazardous conditions. They wrote on their Watches, Warnings, and Advisories page for small craft advisories gale winds they advised inexperienced mariners, especially those in small vessels, should avoid going out in these conditions. On the same page for gale winds, NWS encouraged mariners to “remain in port, seek safe harbor, alter course, and/or secure the vessel for severe conditions.”

*Nautical miles, which are used to measure distance at sea, are approximately 2,025 yards. Here is a converter from nautical miles to miles.

**Warning signs and symptoms of heat related illness from the Centers of Disease Control and Prevention (CDC).