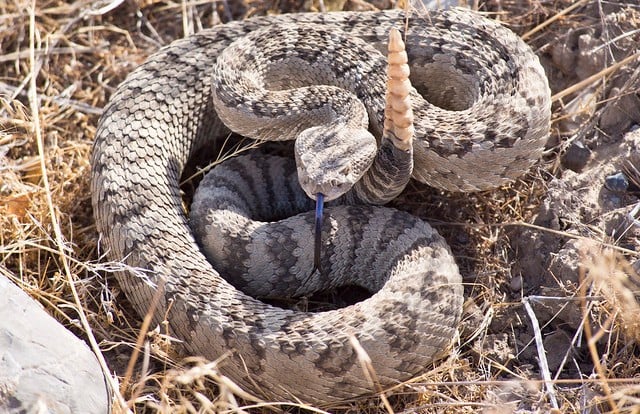 MENDOCINO Co., 5/22/20 — Springtime is the season for baby rattlesnakes, and as temperatures warm up snakes get more active, meaning you’re more likely to encounter one in your path. Most rattlesnake bites occur between April and October, according to the California Department of Fish & Wildlife, and it’s important to act quickly in case you or your pet get bitten.

We included some tips you can use to prevent encounters with rattlesnakes, or advice about what to do if you get bitten, in a similar warning last summer, and there are additional links to information about rattlesnakes in the CDFW announcement below.

As stay-at-home rules are relaxed around the state of California, hikers are undoubtedly anxious to take advantage of the opportunity to visit their favorite hills, mountains, paths and trails. It’s important to remember that snakes are enjoying the fine weather this time of year as well.

With the coming of summer, snakes of many species are through hunkering down, making human encounters with these elusive creatures more likely. Although most native snakes are harmless, the California Department of Fish and Wildlife (CDFW) recommends giving the venomous rattlesnake plenty of space and knowing what to do in the rare event of a bite.

Early mornings and late afternoons are prime times for when snakes come out – they avoid the midday heat. In general, snakes are not aggressive. When people are bit, it’s most often because the animal was surprised.

The most basic but important tip to remember: If you’re outdoors, make sure to stay on trails, as you’ll be in a better position to see (and avoid) a snake if it’s on the path or crossing in front of you.

Rattlesnakes are widespread in California and are found in a variety of habitats throughout the state, from coastal to desert. They may also turn up around homes and yards in brushy areas and under wood piles. Rattlesnakes will likely retreat if given room and are not provoked or threatened. Most bites occur when a rattlesnake is handled or accidentally brushed against by someone walking or climbing.

On occasion, rattlesnake bites have caused severe injury – even death. However, the potential of encountering a rattlesnake should not deter anyone from venturing outdoors. The California Poison Control System notes that the chances of being bitten are small compared to the risk of other environmental injuries. Most bites occur between the months of April and October when snakes and humans are most active outdoors.

CDFW provides tips for safely living in snake country on its website, as well as tips for keeping snakes out of your yard and what do to do (and not do) in the event of a snake bite.

Additional resources can be found on the “Living with Rattlesnakes” page at www.CaliforniaHerps.com and at wildlife.ca.gov/keep-me-wild.