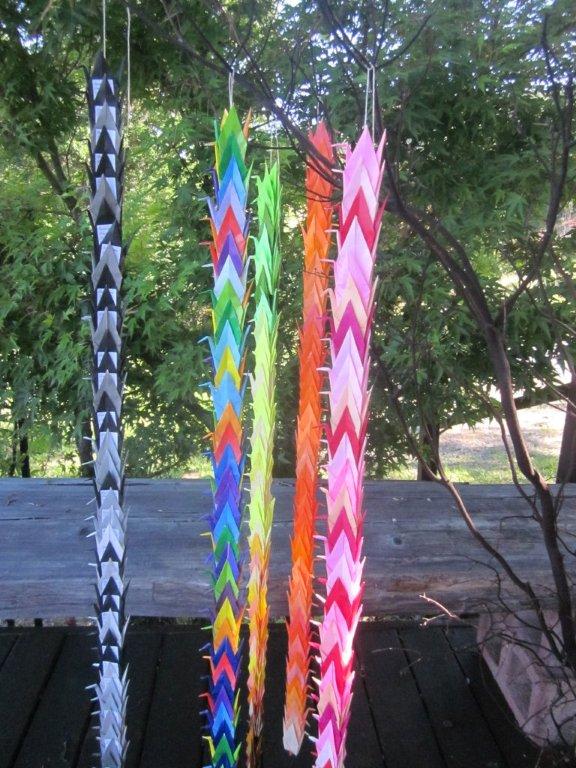 a photograph of the 200 origami tsuru folded by people in Round Valley. 28 tsuru have the names of incarcerated family members of one of the folders, from Sandra Wake.

People in Round Valley have folded 200 origami peace cranes, or tsuru, to send to the White House along with the demand for human rights and dignity for asylum seekers and all immigrants. Over the past two years, Round Valley children and adults have folded tsuru during events held at the Round Valley Public Library, and at the Round Valley Indian Health Center Fair. Tsuru were saved with the general idea of someday creating a meaningful piece of art for the community. Now these 200 tsuru will join thousands more in a nationwide action.

All across the United States Japanese Americans are saying, “Stop repeating history! Never again is now!” Japanese Americans remember well President Roosevelt’s 1942 Executive Order 9066, which forcibly removed people of Japanese descent from the West Coast and held them in inland internment camps. Today thousands of immigrant children and families are being held indefinitely in detention camps under deplorable conditions, including lack of medical care.

Tsuru for Solidarity is a non-violent, direct action project that stands on the moral authority of Japanese Americans, and is in solidarity with all communities being unjustly targeted today. The goal of gathering 125,000 tsuru to represent the number of Japanese incarcerated in the U.S. and Latin America during World War II has been reached, and a new goal of an additional 400,000 represents the number of children and adults being held in immigration detention centers annually.

The specific demands that accompany the tsuru are:

·       Reunify children and their families

On June 6 and 7,  people will gather in protest in a Tsuru Rising! Virtual Protest to Close the Camps, and take action to end immigrant detention. More information can be found at tsuruforsolidarity.org.

One thought on “Round Valley Sends 200 Origami Peace Cranes to White House: Letter to the editor”