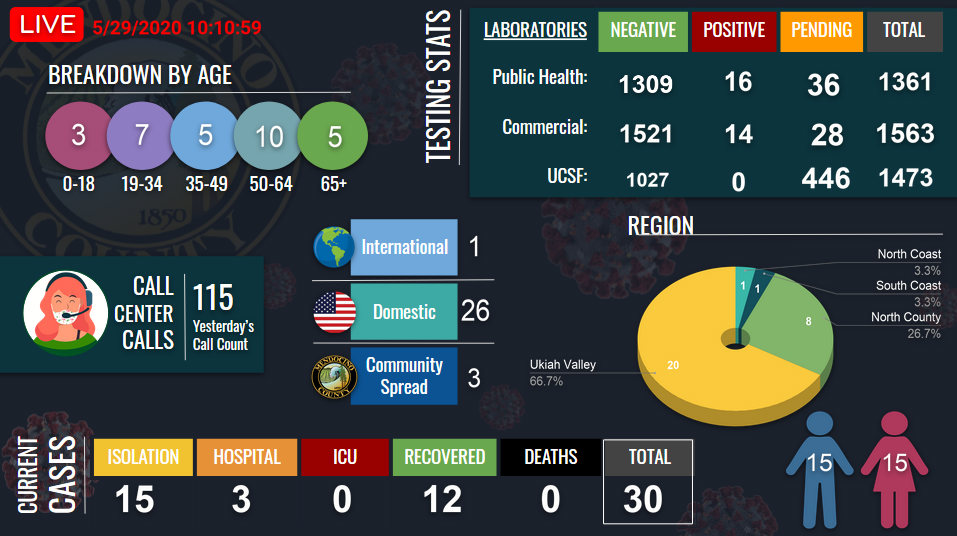 MENDOCINO Co., 5/29/20 — Mendocino County’s months long reprieve from the more generalized affects of the pandemic appear to be coming to an end as Public Health announced this morning that community spread of COVID-19 is now occurring in the county. The case count remains at 30, though test results are generally announced in the afternoon, and for three of those new cases no origin of infection can be found.

Dr. Noemi Doohan, public health officer for Mendocino County, will be giving a press conference live via Youtube and Facebook at 2 p.m. with more details.

In brief, community spread refers to the instances of the transmission of the coronavirus disease (or any disease) in which contact tracing cannot find an origin for the infection. Today it was announced that a specific infection origin cannot be found for three of the cases of COVID that were recently discovered in Mendocino County. Whereas in the past, Public Health case investigators and contact tracing volunteers have been able to find an infected person who then infected each subsequent case, such as a family member, or a someone in work place — or as in the earliest cases, people who were infected outside of the county — these new cases are people for whom an infection origin can’t be identified.

Once such transmission is occurring, it is referred to as “community spread,” meaning that the virus is now generally floating around in the population, likely with a number of asymptomatic carriers.

Here is what Public Health had to say on Facebook:

Mendocino County Public Health is confirming that we have three COVID-19 cases whose origins are unknown, making three cases of community spread. Public Health has been preparing for this likelihood for many months, and is working to ensure that we slow the spread through isolation and thorough contact tracing. For more information on what this announcement of community spread means for our county, please join us for an Update from County Health Officer Dr. Noemi Doohan at 2 p.m. here on this page.

Here is our coverage of the new cases and other developments from yesterday:

For the purposes of identifying the broad region in which a case resides Public Health has divided up the county into six areas: